Today we’ll start taking a position by position look at Virginia Tech’s returning personnel.  Where better to start than at the quarterback position?

The Hokies had three years of Logan Thomas as starting quarterback.  Before that, they had four years of Tyrod Taylor as either the starter, or as the guy who was splitting time with Sean Glennon as a freshman.  Tech hasn’t had this much unknown at quarterback since Glennon was the full-time starter heading into the 2006 season.

Back in 2006, Sean Glennon faced some of the same difficulties that Tech’s starter in 2014 will face.

The big difference is that Glennon had proven wide receivers on that 2006 team.  David Clowney, Josh Morgan, Eddie Royal and Justin Harper were all drafted, and Royal and Morgan still play in the NFL. 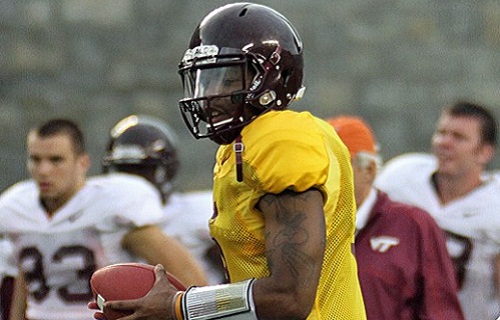 Right now I’m going to assume that Mark Leal will be the starter for Tech’s season opener.  He won’t have the luxury of having Glennon’s 2006 receivers, and he’ll also operate with question marks at nearly every other position on offense (though I think tight end will be a strength, if everybody is healthy).

Leal will face that unfortunate situation while possessing another drawback of Glennon: lack of mobility.  Leal is a pocket quarterback.  He has some improvisation skills, but like Glennon, he’s not a runner.  He doesn’t have speed, and he’s not going to juke guys.

Unfortunately, Leal isn’t blessed with a big arm either.  He doesn’t have a bad arm, but overall, it’s pretty average.  I think he’s a pretty accurate passer, but he can’t make that deep out throw to the opposite hash like Sean Glennon could, and he’s not