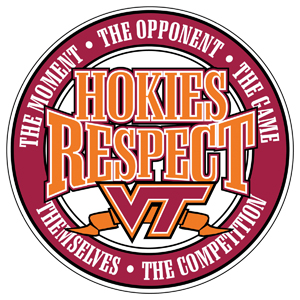 We have posted a couple articles in the last week that have really resonated with Hokie football fans, drawing a ton of comments. Number one was my article about the Sun Bowl, in which my main point was that the Hokie football program doesn’t have the edge, the toughness, that it used to.

Sounds like everyone single one of you agrees, based on the comments that followed the article. I specifically avoided using the word “soft,” but perhaps I should have gone there.

If VT has gone “soft” as a program, then everyone shares some responsibility here: the coaches, the players, and even the fans.

And the administration. I’ve heard from a bunch of Hokie fans that “this all started when Jim Weaver started Hokies Respect” … the thinking being that the emphasis by the administration on being nice and  respectful has made everything associated with Hokie football, from the coaches to the players to the fans, well … nice and respectful. And less successful on the football field. Coincidence? Maybe, maybe not.

If you’ve been reading our articles here on TSL, you know we’re not fond of Hokies Respect. In concept, it’s a good idea. Don’t mistreat opposing fans, don’t be an obnoxious fool (drunk or not), etc. But I’ve never been guilty of that stuff, anyway. I remember making an effort, during the 2003 Hurricane Isabel game against Texas A&M, to personally thank A&M fans for making the trip and attending the game. I shook some random hands and told them “welcome to Blacksburg.” And that was before Hokies Respect was a formal policy.

There’s a finger-wagging aspect to Hokies Respect that makes it annoying, and the campaign has always been more than