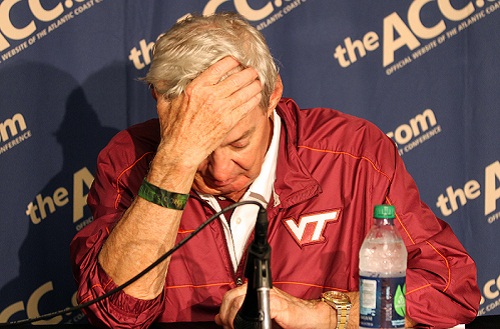 It’s no secret that Virginia Tech leans hard on Logan Thomas on offense. But in reviewing the film from Saturday’s game and pondering things, I can add a little bit to the discussion of exactly what the means.

Well, dummy, it means that when the guy you lean on turns it over four times, you’re going to lose.

Okay, I get it. But if you’re reading this, then you’re looking for something a little more in-depth. If you’re not, then you don’t have a subscription, you’re focused in on the four turnovers, and you’re screaming on the message boards for the coaches to put in Mark Leal, and for Frank Beamer to retire.

Would you say Chase Rettig is a better quarterback than Logan Thomas? Is he more physically gifted? Does he have a higher ceiling? Will he impress the scouts at the Combine next spring, more than Logan?

Is Chase Rettig more efficient in Boston College’s offensive system? Ah, that’s a different question, and yes, he is. Going into this game, Rettig was #47 in the NCAA in pass efficiency, and LT was #100. Coming out of it, Rettig is #41 in the nation, and LT is #93. There are 51 quarterbacks between Chase Rettig and Logan Thomas, in terms of efficiency.