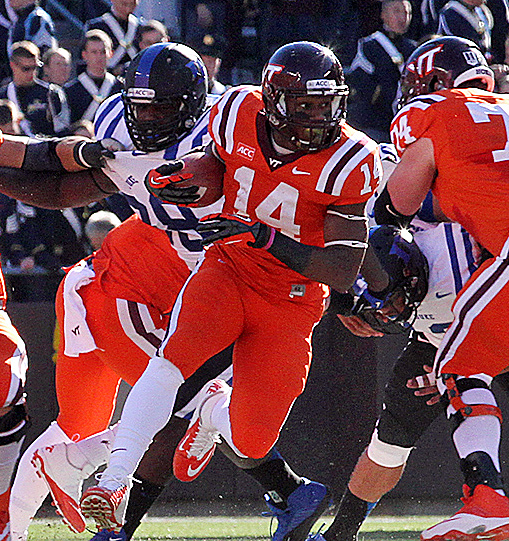 I didn’t think that I could go back and watch the Duke tape and feel good about anything, except for the defense of course.  I was wrong.  I noticed a couple of things offensively that I really like, and which give me some hope.

1: The offensive line soundly whipped Duke in the trenches.

2: Trey Edmunds has much better vision out of ACE/Pistol formations than out of the slower developing read option plays.

If you go back and look at Trey’s high school film (embedded below), you’ll see that he did all of his running out of the I-Formation and the single-back formation with the quarterback under center. (We’ll call this the single-back set, with the understanding that the QB is under center, not in the shotgun.).  Running plays out of those formations are faster developing than the read option that Tech runs, and for a young back like Trey (remember, he’s only 18), they are probably easier formations to run from, particularly if that’s all he did in high school.

See?  All I-Formation and single-back sets.  No read option at all.

On Saturday against Duke, the Virginia Tech running game was able to gain solid yardage out of the single-back formation and the Pistol.  The Hokies didn’t use Edmunds in the read option against Duke.  Rather, they handed it off to him out of the single-back set and the Pistol, and all of a sudden he started hitting the correct hole, running confidently and gaining 3-4 yards after initial contact on many plays.