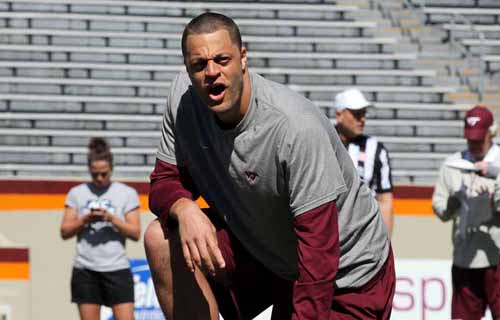 If you’ve been reading our stuff long enough, you know that we’ve wanted the Hokies to start recruiting more high school wide receivers, rather than just recruiting athletes and then converting them to receiver when they get to college.  With the 2014 class, it appears the new coaching staff is moving in that direction.

The Hokies have had inconsistent results turning high school quarterbacks and running backs into wide receivers.  Moving from high school to college is a big step, and changing positions makes it even more difficult.  Guys like Dyrell Roberts and D.J. Coles probably had no idea what a passing tree was until they got to college.

On the other hand, a guy like Joshua Stanford, who played wide receiver in a very advanced passing offense in high school, is playing well early in his career because of his previous experience at the position.  It comes more natural to him, and he doesn’t have as much to learn as guys who aren’t introduced to the position in high school.  Obviously that’s not always the case, because Willie Byrn was a high school QB/RB, but in general I’d rather have receivers who are used to being receivers.

The Tech coaching staff has focused on guys like Stanford for 2014.  They’ve pursued quality players who play the wide receiver position for high schools who like to throw the ball around.  Let’s go over each of Tech’s wide receiver commits for 2014.

Phillips is a consensus top 10 player in the state of Maryland.  He plays for DeMatha High school,