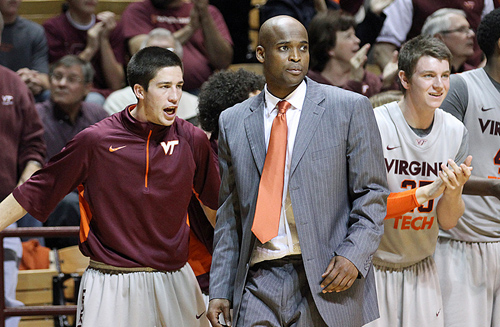 Basketball practice has been going on for the entire month of October.  As we enter the second year of the James Johnson era, many questions surround this year’s team.  Who will replace Erick Green’s scoring?  Can the team play better defense?  Can the Hokies get more consistency out of their upper classmen?

Last season was a struggle.  Even with Erick Green leading the nation in scoring, the Hokies limped their way to a 13-19 overall record, including a 4-14 mark in ACC play.  Tech started 7-0 with wins over Oklahoma State and Iowa, but things came crashing down in a hurry as the defense collapsed and Robert Brown and Jarell Eddie lost their consistency.

With the additions of Notre Dame, Pitt and Syracuse, the ACC now has 15 teams.  The Hokies were picked 15th out of those 15 teams at ACC Media Day, which came as no surprise.  In fact, the voting wasn’t even close.  Compare the points Tech received in the voting to the points received by the other schools in the bottom third…

Ouch. There were 54 voters in the media poll, and all but about 10-12 of them picked the Hokies last. Not only were the Hokies picked last, but it was a resounding pick.  Not that the voting came as a surprise.  Taking off your orange and maroon glasses, and comparing the Hokie roster to the rest of the ACC, it’s tough to justify putting them ahead of any of those other teams.

But thankfully, basketball games are decided on the court and not on ACC Media Day.  Tech can finish higher than that, but only by improving in many areas over last season.  In my opinion, four things need to happen to improve upon last season.  If they don’t, then last