So the Bristol Motor Speedway game with Tennessee is going to happen after all, unless something breaks down at the last instant.  But generally, once negotiations reach the point where the news is leaked to the media ahead of time — and the Speedway has even called a press conference next week — you can feel pretty confident that they’re going to pull it off. For all I know, the contracts have already been signed.

Your first impression on hearing about the game is something along the lines of “Wow! 160,000 people at a football game! And Virginia Tech will be one of the teams! That’s cool!”

That’s right. It is cool.

And then the questions start coming to mind. Too many questions to answer.

I’ll bring some of them up, but I’ve got to be honest … I’m going to raise some questions, without answering most of them. And I’ll admit I’m at a disadvantage because I’ve never been to BMS, so I don’t have an impression of the place, up close.

What will a football field look like in the middle of the BMS infield?

Thanks to Clark Ruhland — @Hokie20 on Twitter — we know almost exactly how a football field will fit in the middle of the infield.  A few concepts are making the rounds, but Clark’s comes closest to having he proper proportions. 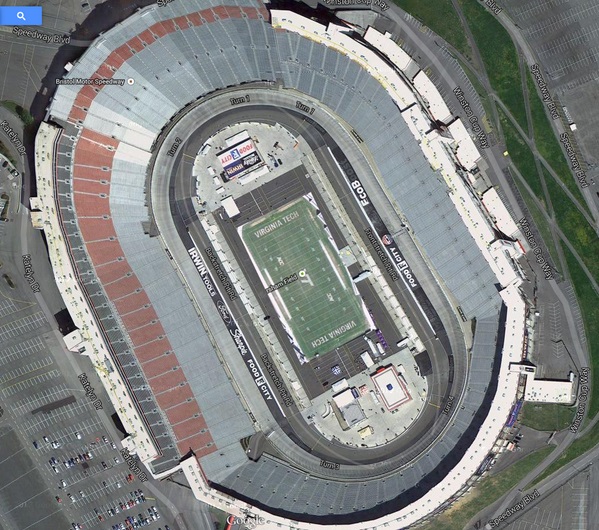 The straightaways at BMS are 650 feet, according to the track facts on the official BMS web site. So Clark did a good job of fitting a 360-foot-long field in the BMS infield with his concept drawing, and of giving you an idea of how a football field will actually fit.