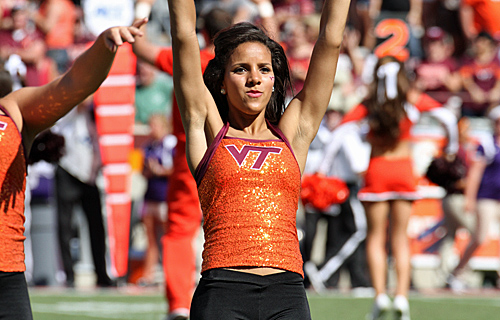 Last week I said that the primary goal for the Hokies heading into their game with Georgia Tech was to focus on getting better from week to week.  It’s hard to imagine the Hokie defense actually getting better, but last Thursday night they did just that.  Bud came out with his most interesting defensive scheme against Paul Johnson’s triple option offense to date, and the players executed it to near perfection.  Foster took full advantage of his veteran, athletic defense and put his best players in position to make plays.  And, they came through.

Bud moved Kyle Fuller to Whip as expected, but in a surprise move (at least to me), he also swapped his young corners and played Brandon Facyson at Boundary and Kendall Fuller at the Field Corner.  My guess is that he did this for a few reasons.  One, because he knew he was going to be blitzing from the Boundary in this game and thought that Brandon was the better option.  Two, because he preferred the coverage combination with Jarrett playing the deep ball in his Cover 2 along with Kendall Fuller when he did send the Boundary on the blitz.  And three, because Brandon is a big, physical body to match up with GT’s big, physical wide outs in a one-on-one situation.  That last is just me guessing.  I haven’t gone back and looked at the film from the game to see how often Facyson had man coverage on guys like Smelter, Dennis and Henry.

It’s significant to point out that Foster’s game plan to blitz Kyle Fuller into the A-gap and disrupt the timing of the GT running game was a brilliant use of personnel and experience.  Foster knew that Fuller would be very disruptive to the interior of the GT offensive line and cause confusion amongst the line about who had responsibility for Fuller.  He was causing the GT guards fits with his quickness.  He zeroed in quickly on the snap count and once he did,