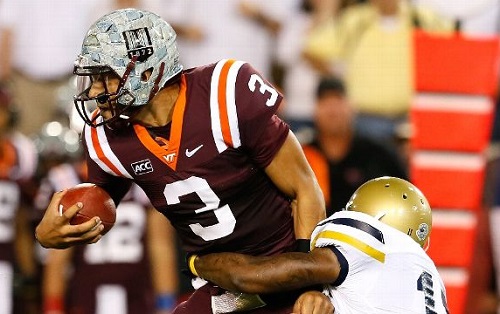 Last Sunday I wrote that Virginia Tech needed more from Logan Thomas if they wanted to win the big games on their schedule this season.  On Thursday night, he delivered one of the best performances of his career, and made it clear that he’s the leader of this team, and that all of Virginia Tech’s offensive success goes through him.

Logan put the team on his shoulders down the stretch of the Marshall game to beat the Thundering Herd, but what was bothering me were some of the little things.  Throwing into coverage for an interception against Marshall, and even being late on the throw to Willie Byrn that eventually tied that game…it was the little things like those plays that I thought needed to be erased if the Hokies wanted to beat Georgia Tech, and have a chance to beat UNC, Pitt, Miami and Maryland (yes, the Terps are pretty good).

That’s exactly what we got out of Logan on Thursday night.  He played a mistake free football game, he was efficient in the passing game, he was a battering ram against that Georgia Tech defense (as usual), and he was completely in command.  And he did it all despite not practicing last week because of an abdominal strain.

I don’t think any of us can truly appreciate how difficult it is to throw accurate passes, run the team, and be used as a human battering ram as Logan was with an injury like that.  It takes a lot of guts, and a lot of toughness.  Let’s all give a tip of the cap to Logan.

Let’s also give a tip of the cap to offensive coordinator Scot Loeffler, who I thought devised an excellent gameplan.  The Hokies didn’t try to do too much in this game.  Loeffler designed a very efficient short passing game that was successful in moving the football, and they kept their running game simple: give it to Logan, and let him run over people.

The strategy was successful.  They didn’t score much, but they were able to impact field position.  For example…

4th possession, 1st half: The Hokies drove it from their own 20 to the GT 44 before Logan Thomas was sacked to end the drive.  The Jackets had to start their next drive from their own 20, and they didn’t score.

2nd possession, 3rd quarter: The Hokies drove the ball from their 25 to the 50, and an A.J. Hughes punt was able to pin the Jackets at their own 9.  They promptly went three and out, and the resulting punt gave Virginia Tech such great field position that they were able to tack on a field goal and take a 17-10 lead.

3rd possession, 4th quarter: The Hokies drove the ball from their own 44 to the GT 39.  The drive stalled, but the punt from A.J. Hughes pinned Georgia Tech at their own 5, and there was no way the Jackets were going to drive the length of the field to tie the game.  That effectively ended things in Atlanta.

So while it wasn’t a dominating performance by the offense by any stretch, there were plenty of things to like from a group that started five freshmen.

2: The Hokies scored in two plays after that first GT turnover on a great call from Scot Loeffler.

3: The offense was able to pick up some key first downs and play the field position game, which is critical against an offense like Georgia Tech’s.

4: We saw improvement from the wide receivers, and tight end Kalvin Cline had a nice night with three catches for 28 yards.

Logan made that offense go on Thursday night, pure and simple, but he finally got some help as well.

Logan’s numbers through five games look like this, game-by-game…

I think we’ve seen a lot of improvement in the passing game over the last three ball games, especially when you consider that the Marshall game was played in conditions that