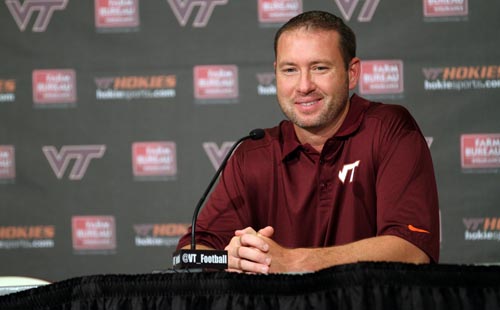 1) I would be interested in a question about our rebuilding offense. Was the need for a change due to offensive philosophy, change in coaches, or lack of talent? The answer might give us some insight as to how long before we can expect to see progress?

Chris Coleman: I don’t think there was anything wrong with the overall philosophy. Frank Beamer wants a strong running game and an efficient passing game that is backed by a strong defense. That’s what every coach wants. Frank isn’t unique. Even with new coaches in Blacksburg, that philosophy is still the same. The strategy is fine.

However, the tactics weren’t always fine. Virginia Tech never really had an effective, consistent short to intermediate passing game under Bryan Stinespring, particularly over the past 6-7 years. It was a big play passing game that relied on throwing the ball down the field … a lot. It was a homerun passing game. It was Dan Uggla (sorry, I’m a Braves fan). It would hit about .190, would never try to find the opposite field, but would still manage 20-25 homers a year simply because it swung for the fences so much.

Going deep a lot requires good pass protection, which is something the Hokies never really had during that era. Combine that with the fact that Tech did a poor job of recruiting and developing offensive linemen, and the result was that the offense evolved into the “let Tyrod improvise and make a play” offense.