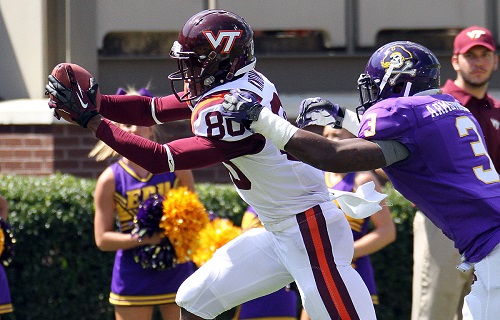 1) For all of Knowles’ speed, why doesn’t he create any separation?

Chris Coleman: Being fast isn’t just about running as fast as you can straight ahead.  It’s about technique, footwork, body control, timing, etc.  Being physical also helps a wide receiver get separation.

When a cornerback turns to run with a receiver who is going downfield, he uses his arms to help jerk his body around.  Think about it like this…if you are in a fight, and somebody is behind you, and you swing your arm back to give him an elbow.  It’s not just your elbow that jerks back…it starts your whole body in a turning motion.  That’s what a cornerback does when he turns his body to run with a receiver.  He jerks that elbow back, which helps turn his entire body quickly.  If his arms are down by his side, he’s not going to be able to make that turn as quickly.  Playing corner isn’t only about your hips…you have to use your entire body to make that turn quickly.

One techinique a receiver can use when trying to run by that corner is to use his forearm to drive that defender’s arm down.  That disrupts the turning technique of the corner, slows him down, and it can allow that receiver the split second he needs to run by him.

At other times, it’s all about hand placement.  If that is playing with inside leverage, there’s nothing wrong with running right into him and using your hands to take him further inside before making your break to the outside.

Demitri Knowles is a track guy.  He does have great speed, but at the high school level he was just able to run slow guys without using technique.  It’s different in college.  He’s still faster than corners, but not so much faster that he can get away with using no technique.  Some guys pick things up like that faster than others, and he’s still in the learning process.

2) What’s up with David Wang? He is playing through another undisclosed injury or was ECU’s Nose Tackle just that