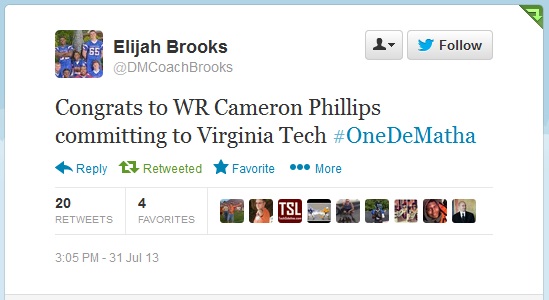 Rutgers, Virginia, West Virginia, and Wisconsin also made the speedy athlete’s finalist list, but a July 17 trip to Blacksburg sealed it for Virginia Tech.

“When I left Virginia Tech that day, I felt it was the place for me,” Phillips recalled.  “I knew I would commit.  It was just a matter of time before I was ready to get it off my chest.”

Phillips visited Virginia Tech alongside his mother, who he said loved the experience.

“I was there with him all day (on the 17th), from about 9:30 am to 5:30 in the evening,” Phillips said.  “He’s just a real cool dude.  He’s a fairly young guy, but he knows how everything should go.  He came and saw me at practice in the spring.  He said he loves me as a player and he has kept in contact with me every week.”

Led by Moorehead, Virginia Tech was in hot pursuit of Phillips after extending a full scholarship offer in May of this year.

“I felt Virginia Tech was more interested in me than the other schools,” Phillips said.

At 6’0″, 180 pounds, Phillips plays offense (WR) and defense (DB) for the Stags.  He also returns punts and kicks and earned first-team all-WCAC honors for his play on special teams last season as a junior.  Virginia Tech is recruiting him to play wide receiver, and Phillips says he may get a crack at punt returner as well.

“He’s a phenomenal athlete as a returner, as a DB and as a wide receiver,” Brooks said of Phillips in an earlier interview with TechSideline.com.  “He has phenomenal ball skills.  He’s a very versatile athlete.