While the bottom half of Tech’s 2013 schedule doesn’t look too intimidating, the top half looks quite imposing once you do the research.  Pitt, Georgia Tech, UNC and Miami all return a lot of starters from last season, and three of those teams soundly beat the Hokies in 2012.

Virginia Tech outclasses Boston College as a football program in almost every way.  They have better fans, a better home field advantage, better facilities, better players, and better coaches.  Yet every time the Hokies take a trip to Chestnut Hill, they find themselves in a battle.

Steve Addazio takes over as BC’s new head coach in 2013.  He served as Temple’s head coach for the last two seasons, and before that he was the offensive coordinator at Florida.  Whether he’ll be able to clean up the mess that Frank Spaziani left remains to be seen.  He’ll have a veteran quarterback in Chase Rettig, and the Eagles also return most of their starters from a year ago.

I would most definitely favor Virginia Tech to win this football game at home.  However, November road games up north are always a concern.

Recent record vs. BC: The Hokies are 7-3 against BC since ACC expansion.  Tech has won the last five meetings between the two schools. 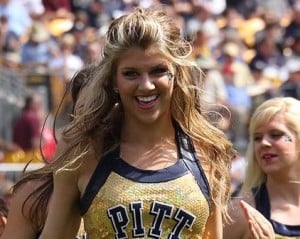 Pitt gave Virginia Tech a strong defeat in Heinz Field this season, and they’re hoping to do it again in a conference game in 2013.  Pitt travels to Blacksburg on October 12, and they’ll have an extra week to prepare for the Hokies.  Meanwhile, Tech will be coming off a tough game against the North Carolina Tar Heels.

The Panthers went 6-7 last season and lost the Compass Bowl to Ole Miss.  They got off to a tough start, but rallied to have a solid season.  They seem to be a well-coached team, with former Wisconsin offensive coordinator Paul Chryst now at the helm.  Pitt was a very physical team a year ago, as the Tech defense will attest.

Pitt returns nine starters from the defense that started the Compass Bowl.  They also bring back some good players on offense, such as rising sophomore tailback Rushel