Nine seasons into their ACC tenure, the Hokie basketball team has turned into what almost everyone expected back in 2004: a cellar-dweller.

There’s no embarrassment in losing to Duke, as the Hokies did last night. But losing by 32 points at home is another matter, and I read a tweet by Mark Berman this morning that really drove home what’s going on here: 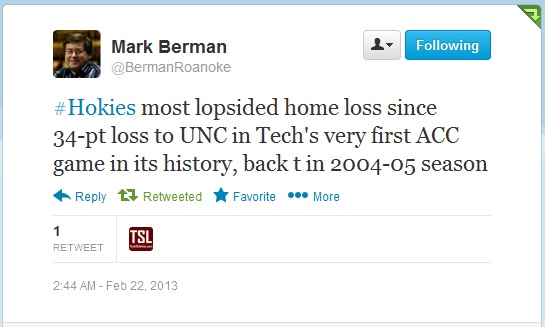 Do you remember that UNC game, back on December 19, 2004? The ACC did a very nice thing for VT: for Virginia Tech’s first-ever ACC game, the league sent one of its marquee teams, UNC, to Cassell. (Contrast this with the Big East, who never, in four years of membership, sent Syracuse to Cassell.)

Like Duke last night, UNC was ranked #6 in the nation that day. Cassell was filled to its capacity of 9,847. Orange T-shirts commemorating the first-ever ACC game in Cassell were draped across every seat (I still have mine), and orange pompoms were handed out. The excitement in the air was palpable, and Virginia Tech’s ACC membership was a shiny new treasure. The football team had wrapped up the ACC championship two weeks earlier, and anything seemed possible.

And then UNC, who would go on to win the national championship, blew the Hokies out by 34 points, 85-51. At one point, the Hokies actually led 20-19, with 7:46 left to go in the first half. Then the Heels threw a suffocating 30-10 run on Virginia Tech, and that was the end of that.

We filed out of Cassell thinking “Man, we might not win a single ACC game this season.”

The Hokies Surprise Everyone

That turned out not to be true, of course. Expected to be the doormat of the league, the Hokies instead were very competitive in their first seven seasons in the league, through the spring of 2011.

In those seven seasons, the Hokies had the sixth-best winning percentage in the conference in regular-season games, but a better way to describe it is that the Hokies were firmly in the league’s second tier of teams, a group of five schools that weren’t nearly as good as