Welcome to the coaching carousel.  It’s always been a wild ride, but now with the advent of Twitter, it’s gotten a little windier and a little bumpier.

I think Tech fans have forgotten rather quickly – in the matter of a few months, actually – how crazy a hiring process can be.  When Seth Greenberg was fired, we heard all sorts of crazy things over the next couple of weeks.  We heard stories ranging from Shaka Smart having dinner at 622 in Blacksburg to Jim Weaver being thiiiiis close to hiring former UNC-Charlotte head man Bubby Lutz.  In the end, it turned out to be the guy most of us figured it would be the entire time: James Johnson.

However, this search for an offensive coordinator has been a lot quieter than you might expect, and it’s easy to see why.  Frank Beamer hasn’t officially fired anyone.  Because of that, the media hasn’t really, truly picked up on it.  Don’t get me wrong, most of the local media knows something is up.  But ESPN talking heads?  Nope.  They don’t have a clue, and if they do, they aren’t going to report it because it’s technically not official.  And honestly, neither do some of the other guys around the region who don’t cover the Hokies exclusively.

A couple of Tweets got the Hokie Nation going on Sunday.  The first came from Michele Gordon of Comcast Sportsnet Mid-Atlantic. 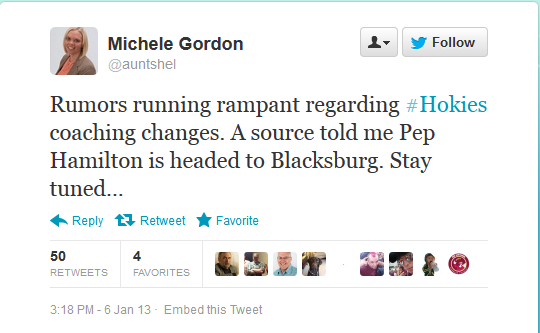 The second one came from Josh Parcell, the Social Media Coordinator for ESPN.  Parcell also used to cover Virginia Tech for the Collegiate Times, he’s spent most of his life in Blacksburg, and one would think he has a lot of connections around town. 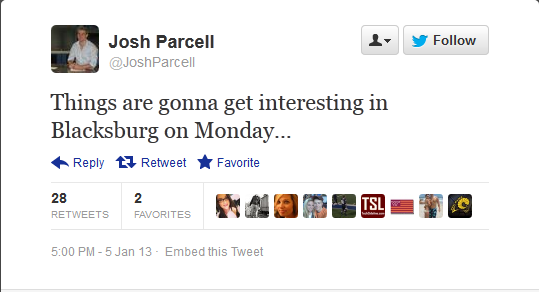 Both Gordon and Parcell say that something is going to happen in Blacksburg on Monday, which is today.  Doug Doughty of the Roanoke Times says something