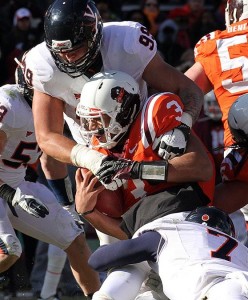 In so many ways, this was an appropriate game with which to wrap up the regular season.

To close out Virginia Tech’s worst season in 20 years, the Hokies played in front of one of the smallest Lane Stadium crowds in some time, in frigid weather, against a bad football team. The kickoff was in the noon hour, like the majority of Tech’s games this year. Noonish kickoffs on ESPNU and the ACC Network are where the bad games happen – that describes six of VT’s games this season.

It was an ugly, sloppy game, like so many games this year. Logan Thomas was wildly inconsistent, as he has been all season, and the Hokies failed to have a tailback rush for 100 yards, for the eleventh time in twelve games.

The defense played tough, but gave up just enough big plays for VT’s struggling offense to make it a close game.

The game was ultimately decided not by a great play, but by mistakes: turnovers (including one critical one late in the game) and poor coaching decisions. It ended with a whimper, not a bang.

But this game was also appropriate season-ender because it ended in a win, and it clinched a bowl bid. It ended with the ninth straight Hokie victory over the Virginia Cavaliers, the first time either team has won nine in a row in this series.

I noticed a few years ago, when VT started stringing together consecutive wins against Virginia, that the longest streak in this rivalry was eight wins — UVa won the first eight games played between the two teams — and for years, I’ve wanted Virginia Tech to win nine in a row. Now they have, and that’s a great thing.

Going to bowl games and beating Virginia is what the Hokies do. With the win, they clinched their 20th straight bowl bid, third behind only Florida State (31) and Florida (23). And with the win, the Hokies ran their 20-year record over the Cavaliers to 16-4. That dates back to (and includes) Tech’s 1993 win in Charlottesville. I didn’t realize until just now that