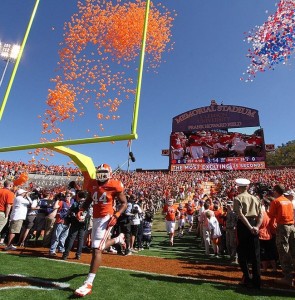 But the reasons why the Hokies lost by three touchdowns, and how it unfolded, weren’t what I expected at all.

They were, however, familiar.

Visions of Sammy Watkins and DeAndre Hopkins running away from feeble attempts at coverage never materialized. Fears of Andre Ellington gashing the Hokies defense never came about. The defense played a pretty good game, and we’ll get to that in a moment.

But coaching miscues at key moments, and the offense failing to generate consistent yardage and put up points … those storylines are familiar and not surprising when they surface. Add in some dumbfounding calls by the referees, and next thing you know, it’s 38-17, and the bus ride home is quiet.

The Hokies won this game statistically in a lot of areas. Score, of course, wasn’t one of them:

In another major stat, third down conversions, the Hokies nearly tied Clemson (VT 6-of-16, Clemson 6-of-15).

If you had told me those stats before the game, I wouldn’t have been dumb enough to declare a Hokie victory, but I sure wouldn’t have foreseen a three-touchdown loss.

Of course, there are other stats that explain the loss:

When field position starts going against you, you don’t sustain drives to flip