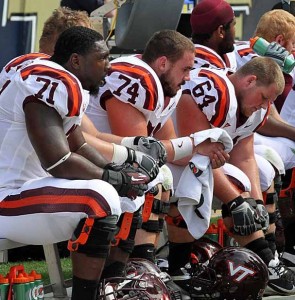 This epic beatdown, in which the Hokies got thoroughly outplayed and outcoached by an average football team, sent me rummaging through my memory banks to reflect on blowouts of the past.

The thing about “blowouts of the past” is that they can shed some perspective on things and help you put things in context, but they can’t tell you what’s going to happen next, this year. You might think they can, but really, they can’t. You either think the Hokies are going to recover and be okay, or you think this loss is a harbinger of doom for this program. Some of you will be right, and some of you will be wrong. That doesn’t make either camp accurate soothsayers, just lucky guessers.

This will not be much of an article on this game. There’s no point in talking about this game in any sort of depth, because we all know what happened: it was a total kick in the face. The Hokies weren’t ready to play emotionally, they were flat, they got blown off the ball on both offense and defense, and they committed four turnovers in their first six possessions. The details are here in the game recap, and here in the stat pack, and here in CC on Sunday, Chris Coleman’s thoughts on the game.

I’m also not going to go off on a tirade. Chris went pretty hard to the hole in “CC on Sunday”. Could we do more on that front? Sure, but at this point, it would be like smacking a kitten: gratuitous and unnecessary.

About the only things that went well were special teams,