The Pittsburgh weather did something no ACC team has been able to do this season – keep No. 5 Virginia Tech from registering a win.

Cold weather and snow cancelled the final game of the series between the Panthers and Hokies, but not before the Hokies swept a Friday doubleheader from the Panthers, 12-3 and 7-2. Even those games were played with low temperatures (40s) with strong wind and intermittent rain, but that didn’t slow down the Hokie express.

“We try to play and prepare the same whether it’s 80 degrees or 30 degrees out,” Tech head coach Pete D’Amour said afterwards. “Obviously it’s tougher to prepare when it’s cold and windy, but the players didn’t let the weather affect them. That’s the sign of a mature team.”

The Hokies bats were as hot as a summer day, scoring a total of 19 runs on 20 hits that included four home runs and three doubles. Virginia Tech scored five runs in the first inning on Friday, capped off by off with this three-run bomb by Jayme Bailey off of the Pitt sign in centerfield.

Emma Ritter, the ACC’s leading hitter (.467), continued her blistering pace, going 4-for-6 with two home runs, a double, a single and a stolen base. Here’s a look at her day.

The Hokies are now hitting .328 as a team with eight players batting .300 or better. 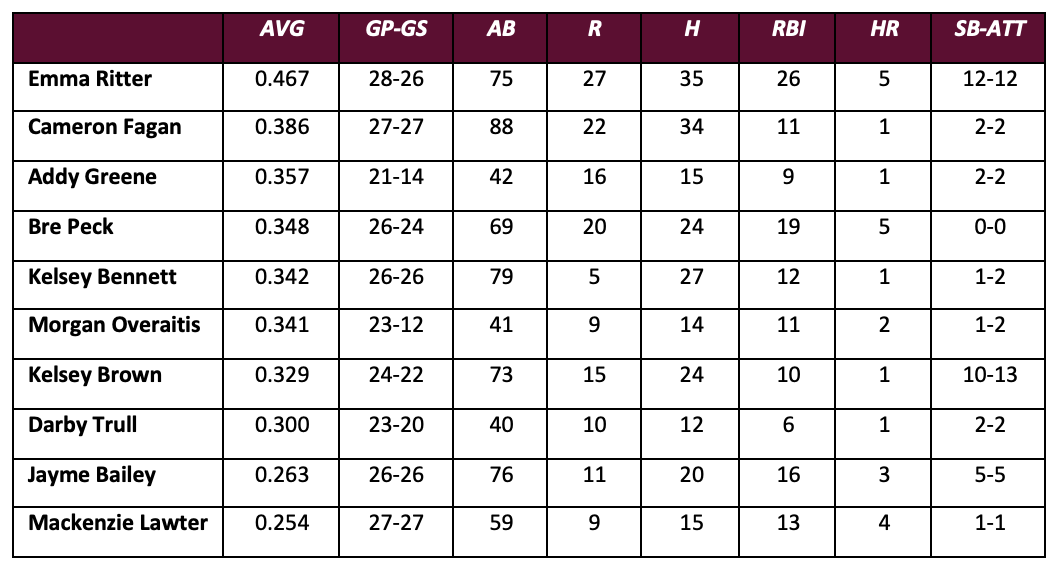 As usual, the Hokie pitchers were in shutdown mode.

Keely Rochard only pitched three innings in Tech’s first game since the Hokies had a 12-0 lead, but she was her usual dominating self, allowing just a single hit and striking out six. Ivy Rosenberry and Mackenzie Osborne closed the deal.

Emma Lemley took a perfect game into the seventh inning of the second game before a bunt ended her quest for back-to-back no hitters. She finished with 14 strikeouts for the day.

“I could probably just repeat my thoughts from previous weekends,” D’Amour said, “but our pitching was stellar and I thought we had good at-bats in the first game. Their pitcher in game two was pretty good, but I thought we could have made quicker adjustments against her. But we scored enough to win.”

Up next for the Hokies is a critical trip to the state of Florida where they will play a three-game series against No. 23 UCF, followed by an ACC showdown with No. 3 Florida State.

“We’ll take advantage of some downtime this week and get ready for a challenging couple of weeks coming up,” D’Amour said.