The #21/#22 Virginia Tech Hokies head to Tempe, Arizona this week to participate in the opening round of the NCAA Softball Championship. The Hokies (33-13), seeded #2 in the region, will open play against West Coast Conference Champion Brigham Young (36-15) Thursday at 7:30 eastern time. Regional host #12/#8 Arizona State (32-14) will open play later that evening against Missouri Valley Champion Southern Illinois (37-14). Both games are scheduled to be shown on ESPN3.

This will be the lone Regional that begins on Thursday, as BYU does not play on Sundays.

Here is the schedule of the Tempe Regional, which is a double elimination format:

The host Sun Devils were given a #15 seed by the NCAA selection committee despite being ranked anywhere from #8 (ESPN/USA Softball) to #13 (Softball America and D1 Softball) in various polls. The Hokies, meanwhile, had made the initial cut of 20 potential host sites, but a late season sweep by Notre Dame dashed those hopes. Instead they ended up as what appears to be the second strongest #2 seed.

“We’re excited to be going to Arizona State,” said Hokies Coach Pete D’Amour. “I’m just glad we’re a 2 seed. Of course, I’d like to be a 1 and host, but we play well on the road…all regionals are competitive. Southern Illinois has had a solid program for years, it seems like BYU wins their league every year, and ASU has offensive firepower that is only paralleled by a few programs this season.

Here is a closer look at the teams in the Hokies’ bracket, starting with the Tale of the Tape: 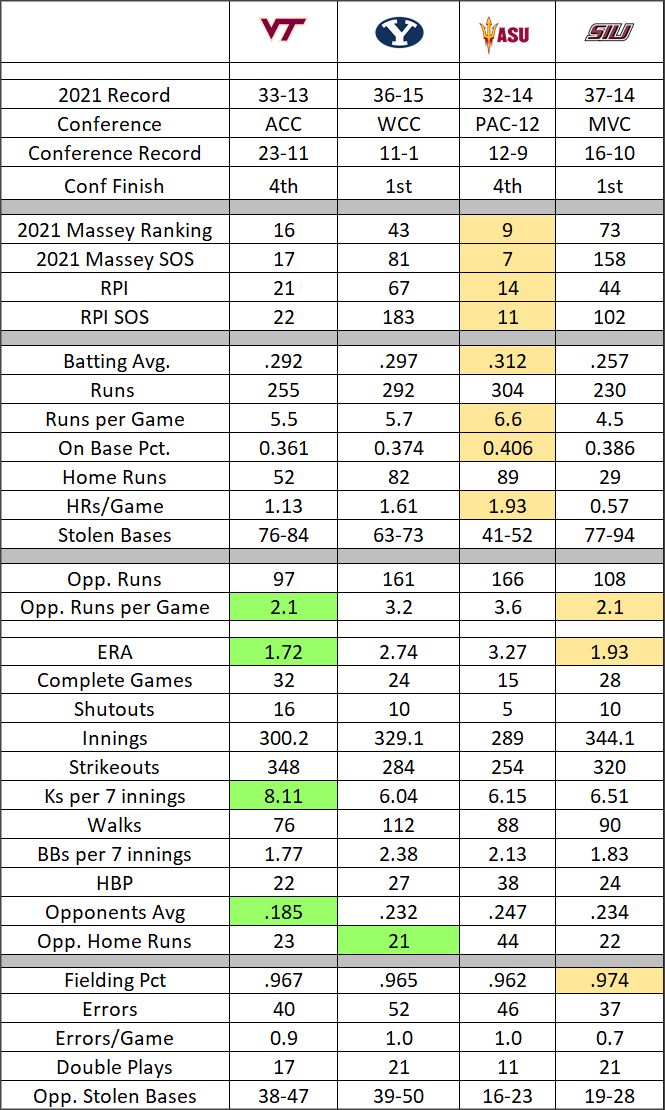 This will be the 16th consecutive NCAA Regional appearance for BYU (36-15, 11-1 WCC) and 17th in program history. The Cougars won the West Coast Conference championship for the seventh time in as many years and have won conference titles the last 12 years in four different leagues.

BYU enters the game with a load of confidence, having won 25 of their last 27 games, which includes a 3-game sweep of #25 Baylor. This comes after they started the season with a 11-13 record that included a loss to #2 Washington, two losses to #3 Arizona, a loss to #10 Texas, and two loses to #16 Arizona State. However, the Cougars enter Regional play red hot, having won their last 8 games by a combined score of 67-7.

BYU is an experienced squad, one that did not lose any players from the 2020 team. Over 69% of their starts this year were by juniors or seniors.

BYU is coached by Gordon Eakin, who has been with BYU since the inception of the softball program in 2000, the last 19 years as the Cougars’ head coach. He recorded his 700th career win this season and has led the Cougars to six West Coast Conference titles, six Mountain West Conference championships, one Western Athletic Conference tournament championship and 15 NCAA tournament appearances.

Kenneth Massey’s Ratings predicts a 4-2 Hokies win and gives the Hokies an 80% chance of winning their opening game.

The Southern Illinois Salukis qualified for the NCAA Tournament as the champion of the Missouri Valley Conference. They won 37 games during the season, including a 6-5 win at #22 Mississippi State. This will be the Salukis 13th NCAA appearance.

The Salukis lead with pitching and defense. Sophomore pitcher Sarah Harness (1.56 ERA, 208 Ks in 188 innings) led the Salukis to the MVC conference title, pitching 3 complete games and giving up only a single earned run in 21 innings while striking out 26. Harness has started 24 of Southern’s games this year, completing 21 of them and will most likely be called to carry the load in the Regional competition.

At the plate, the Salukis are led by True Freshman Bailey Caylor (.345) and Senior Jenny Jansen (.325). They do not hit a lot of home runs – just 29 for the season – and have the lowest team batting average of the 4 teams in Tempe (.257). They will play small ball, however, as they have 77 stolen bases and 21 sacrifices. They also don’t typically beat themselves as they led the MVC in fielding percentage.

Their offense was hurt this season by the loss of the 2019 MVC Freshman of the Year Ashley Wood, who was injured 15 games into the season.

Southern Illinois is coached by Kerri Blaylock, who is the all-time winningest coach in Southern Illinois softball history. She is in her 22nd season with the Salukis and has won 30 or more games 17 times.

Southern Illinois draws Arizona state as their opening opponent and Massey’s ratings predict a 6-1 Sun Devil win and Arizona State with a 92% chance of winning the game.

Arizona State has an impressive resume and there are some in the softball world who believe that they were under-seeded at #15. Their resume includes Pac-10 series wins against Top 10 Teams Arizona and Oregon and two wins to open the season against regional foe BYU.

Arizona State is easily the most potent offensive team that the Hokies have faced this season, ranking second in the country in home runs per game (1.98) and fourth in slugging percentage (.608).

The Sun Devils are also a very experienced team with three of their top four hitters being 5th year seniors. All Pac-12 catcher Maddi Hackbarth led the conference in home runs (20), and RBIs (57), and the Sun Devils in batting average (.402). She typically bats third in the lineup.

Her twin sister Kindra (.338 average, 10 HRs) typically bats leadoff and leads the team in stolen bases with 16 (in 18 attempts). Kindra was a Softball America All-American in 2020 and a USA Softball Preseason Top 50 Player this season. Alli Tatnail has a .343 batting average for the season but hasn’t seen but one plate appearance in the last month.

The Sun Devils are coached by Trisha Ford, who is in her 5th season with the Sun Devils after a very successful career at Fresno State. She has a win percentage of over .688 at ASU and was the Pac-12 Coach of the Year in 2018 – a year in which she took ASU to the College World Series. This is the 16th consecutive year that Arizona State has received a bid to the NCAA Regionals and their 8th time hosting. The Sun Devils are 24-6 all time when hosting.

In an interesting scheduling quirk, Arizona State has only played 7 games in the last month and none in the last 11 days, due to a 4-game series at California being canceled. It will be interesting to see if the layoff affects them.

For the Hokies, there are several question marks as they head west.

On the last question, Coach D’Amour said that the ACC Tournament last weekend “felt like Regionals,” and he liked what he saw from his team. “I thought our kids performed better this weekend than they did in Lexington (NCAA Regional in 2019)” he said after the Clemson game. “It’s the same kind of environment (of the NCAA’s), adding that he didn’t see any ‘saucer eyes’ from his returning players and very little from his freshmen.

Coach D’Amour has consistently said that “if we have Keely on the mound, we have a chance to win against anybody.” That theory will be tested in Tempe and it’s imperative that the Hokies give her some run support – preferably early. Rochard has been a workhorse for the Hokies this season, pitching almost 69% of the total innings for VT. She is currently third in the country with strikeouts with 299.

There is also the question of the time zone change and the desert heat – temperatures at game time on Thursday are predicted to be in the upper 90s. “Traveling across the country for a regional will be a new experience for all of us, said D’Amour. “There can be some challenges – most notably the heat and the time change I don’t think we’ve played in the 90s since we were in Florida our first year at VT, so we’ll have to adjust…and with the time change, we’ll have to monitor when the ladies wake up and go to bed since 9 PM in Arizona is midnight at home so we can’t live by the clock out there.”

But at the end of the day, D’Amour feels that the Hokies simply must control what they can control. “The keys for success don’t change for us,” he says. “We need to play solid infield defense, we need to stick with our approach offensively, and we need to stay sharp on the mound. If we can do those three things, we can compete with anyone.” 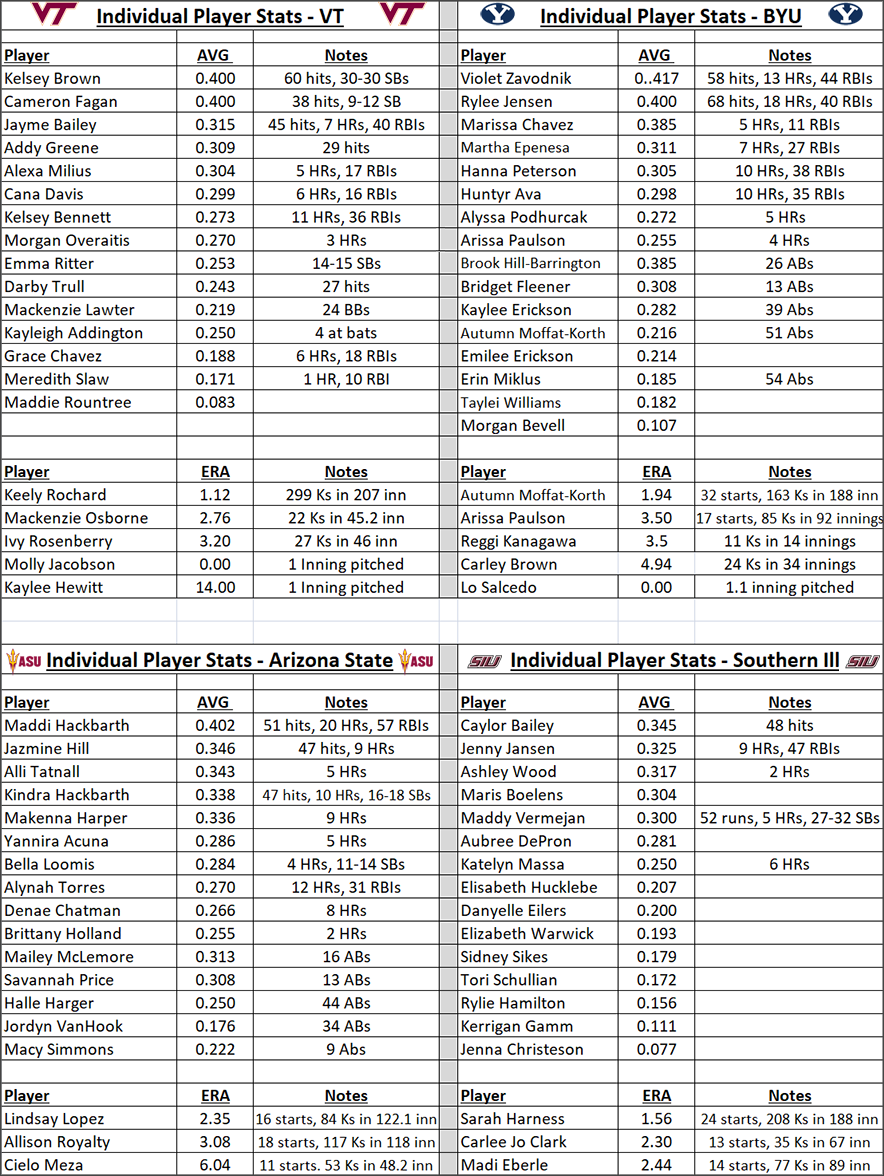