By now you’ve probably read about Virginia Tech’s new Hokie Scholarship Fund program, which (among other things) redefines Hokie Club contribution levels and introduces per-seat minimum donation levels for football and men’s basketball. It’s designed to raise more scholarship money, because Hokie Club contributions over the past two fiscal years haven’t been enough to pay the scholarship bills. It also brings Virginia Tech in line with virtually every major program in the country, who have all gone to a per-seat minimum annual donations over the last decade.

The first thing that should be pointed out is that this is not a money grab from the Virginia Tech athletic department. It is a necessary move that is designed to help the department pay its scholarship bills. The graphic below is telling (click all pics in this article for a larger image)…

Tech’s scholarships bill has increased by around 60% over the last five years. Meanwhile, donations to the general scholarship fund have remained relatively flat, or even decreased. The result is a $2.1 million deficit. In other words, the Hokie Club can no longer pay the bill for all athletic scholarship. That $2.1 million has to come from other sources, such as the regular operating budget. The loss of that money limits Whit Babcock’s ability to support all of the athletic department’s programs, hire a complete recruiting staff for the football program, give Buzz Williams a raise and extension to make sure he stays, etc. Until the athletic departments gets its scholarships fully funded by Hokie Club donations, as they used to be, their financial flexibility is limited.

(Note: Tech’s deficit is expected to rise to $3.5 million this fall.) 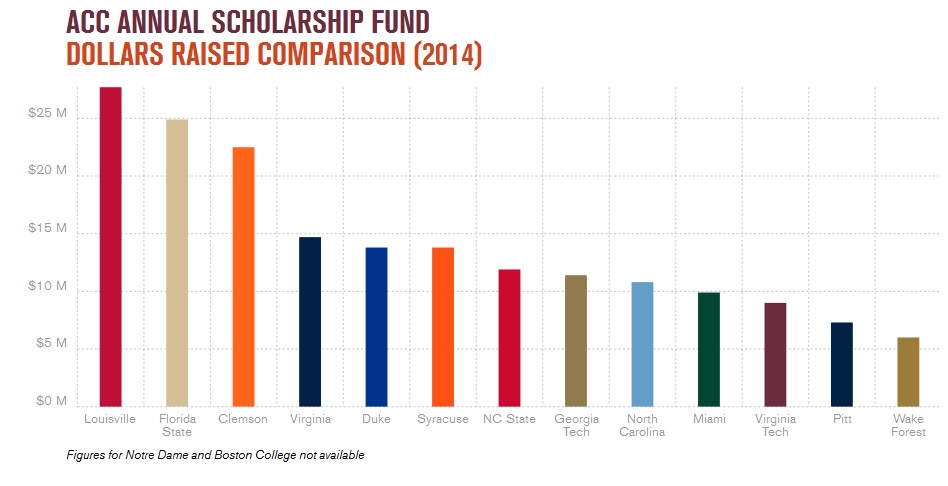 In terms of money raised for the annual scholarship fund, that graphic provided by the Virginia Tech athletic department puts the Hokies near the bottom of the ACC, ahead of only Pitt and Wake Forest. Louisville, Florida State and Clemson are at the top. If you ever wondered why Clemson is able to afford such an expensive recruiting staff and Virginia Tech is not, this is one of the reasons why. Those programs apparently don’t have any trouble funding scholarships, and they also have fewer varsity sports than Virginia Tech. Florida State has 18 varsity sports, Clemson supports 17, while the Hokies fund 20.

Here’s a little bit of math for you to chew on (numbers are estimated based on the graph above):

Clemson is setting records in donations. Their IPTAY program brought in $60.1 million in donations (scholarship fund donations plus donations for facilities, specific programs, etc.) for the 2014-15 fiscal year, according to this article. So in short, the Tigers are bringing in a lot more money while supporting three fewer sports than Virginia Tech, and they also bring in more ticket revenue because they have a bigger football stadium. The Hokies raised well over $20 million if you count donations towards facilities, endowments, etc., but the donations Clemson received for their annual fund alone may well have outpaced all of the money Tech was able to raise.

In short, Virginia Tech needs to raise more money. They need to do it by getting more money in donations from their current Hokie Club members and season ticket holders, and they also need to add more new members to the Hokie Club. 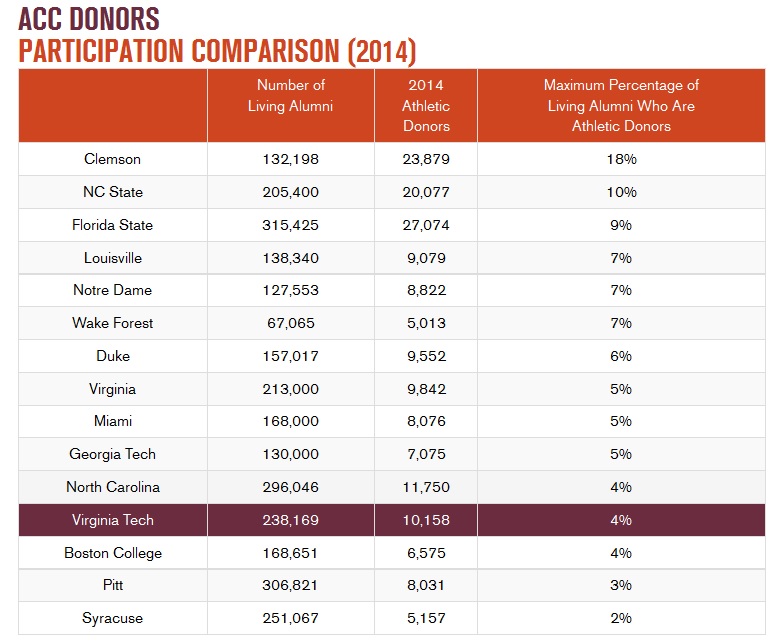 Virginia Tech ranks near the bottom of the ACC in maximum percentage of alumni base who are active donors to the athletic department. Only Boston College, Pitt and Syracuse rank below the Hokies. Georgia Tech, UVA, Wake Forest, Duke, Louisville…all of those schools have a much higher percentage than Tech.

I’ve always considered NC State and Virginia Tech to be somewhat similar schools. They are both land grant state schools with similar fan bases. The Wolfpack have 20,077 donors out of a living alumni base of 205,400, while the Hokies have just 10,158 donors out of 238,169. That’s a huge difference, and quite frankly it was pretty shocking to me when I saw the numbers.

Now that you’ve seen all the numbers, you probably have a few questions. Questions should be directed towards the Hokie Club, and the folks over there in those offices will be glad to help you out. I can’t answer them all, because I don’t know the new program inside and out, but I can answer a few of the important ones.

Does this mean I’ll have to make an extra donation on top of my current donation? No. Your per-seat gift will count towards your annual giving level.

Does this mean I’ll have to give more money to keep my current level of seating? Maybe, maybe not. For me personally, I could actually lower my donation and still meet the minimum required to sit in my current section. Or for an extra $100 (that’s $8.33 per month), I could actually have the opportunity to upgrade to a much better section closer to the middle of the field. For some people, this new system will require a higher giving level. For others, it could actually lower your giving level. It all depends on how much you’ve given in the past and where you want to sit.

Note: for a seating calculator, click here. I recommend everybody use this tool. It’s very valuable.

Does any other school have a system like this? Yes. Almost every school in the country has gone to this model, which is one of the reasons Virginia Tech has fallen so far behind. Only Notre Dame, Kansas, Indiana and Duke have not moved to this model, and Notre Dame is making the change in 2017.

Note: There’s a complete FAQ near the bottom of this link. If you have any questions at all about this new program, you should read through everything on that link.

In short, this program will be different for everybody. For example, if you have made a big donation in the past (to reach, say, Hokie Century Champion — $150,000 — level), and were told all you had to do from that point on was to donate $500 to keep your 50-yard line seats every year, you probably won’t like this change, because it means you’ll need to donate $800 per seat to stay there. If you have 4-6 seats, you’ll have to pay $3,200-$4,800 per year, instead of just a small donation under the old model.

Others will not be affected by it at all. Some (like me) will be able to increase their giving by a very small amount and potentially have the chance to get much better seats. A program like this is never going to make everybody happy, but it is necessary for the financial health of the athletic department.

Considering the donation comparison between Virginia Tech and Clemson/FSU, the Hokie Club didn’t have much of a choice. Either Tech’s donors will step up and help close that donation gap, or the Hokies won’t be able to consistently compete with those schools. Athletic departments are only as strong as their fan bases.  Tech’s Spring Game turnout is very good when compared to FSU and Clemson, but those Seminole and Tiger fans seem to be a lot more generous with their giving.  The Hokies would be in good shape if their Spring Game attendance was an indicator of their donor base.  Unfortunately, it’s not. 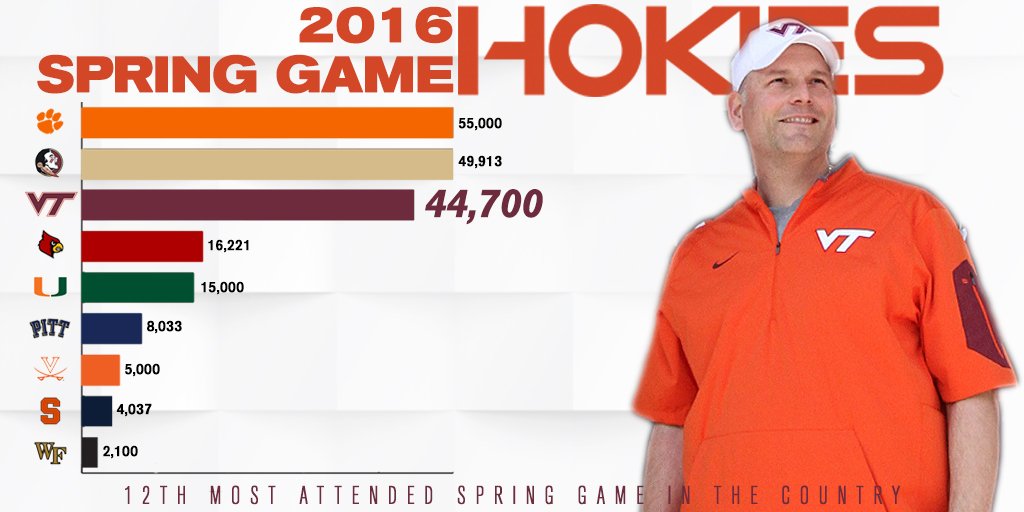 Unfortunately, right now we are losing the battle of the fan bases to Clemson and Florida State (and many other ACC programs as well). Clemson has over 100,000 fewer living alums than Virginia Tech, yet their donors stepped up to the tune of $60.1 million in 2014-15. Florida State has more living alums than Tech, yet not so many more that they should be raising over twice as much money for their annual fund. Are Florida State and Clemson alums richer than Tech alums? Not according to this tool at PayScale.com that measures average mid-career pay…

The story is the same for recent grads. Here are the average early career salaries for graduates of each school…

On average, Virginia Tech alums seem to make more money than Clemson and Florida State alums. I don’t have any way of knowing whether or not those numbers are accurate, but I found a Forbes article that used the Payscale.com link above as a reference, so that’s good enough for me. I would have guessed that the Tech fan base earned the most, on average. If those numbers are right, it means that collectively the VT fan base is bringing in more money and donating less. Of course, those numbers don’t include the various donors for each school that did not graduate from that university. I’m guessing Florida State has a high number of non-alums who donate to their program.

It’s up to the Tech fan base as a whole to decide how competitive it wants their athletic programs to be. Throwing money at the problem isn’t always a guarantee of success, but these days you aren’t going to have much of a chance to compete without that money.

After getting this new program set up, the Hokie Club plans to make a big push for new members. That push is sorely needed. For a fan base that is as rabid as Tech’s has been over the last 20 years, it’s surprising and a bit humbling to see us rank behind almost the entire conference in so many different metrics. A big part of that problem is the lack of outreach from the Hokie Club in the past. That has already changed a lot over the last year, and it is going to change a lot more very soon. The first few years of this new giving program should give us a good indicator of how far the Virginia Tech fan base is willing to go to be competitive.