Massive improvements are coming to Virginia Tech’s athletic facilities, and almost every single sport will benefit.  Buried in the notes of Tech’s March BOV meeting are details on the master plan for facilities in the athletic department.  They include a number of facility improvements that will impact track, basketball, baseball, soccer, golf, and many more programs.

Currently Virginia Tech is renovating the interior of the Merryman Center at a cost of $2 million.  That’s just the start of a huge set of projects that could cost over $30 million altogether.

Warning…this article is going to be extremely graphic-heavy.  You can click on the graphics for a larger image.

All graphics are from an Intercollegiate Athletics report to the Student Affairs & Athletics Committee of the Board of Visitors, presented on March 21, 2016. We provide a link to the full report at the bottom of this article. 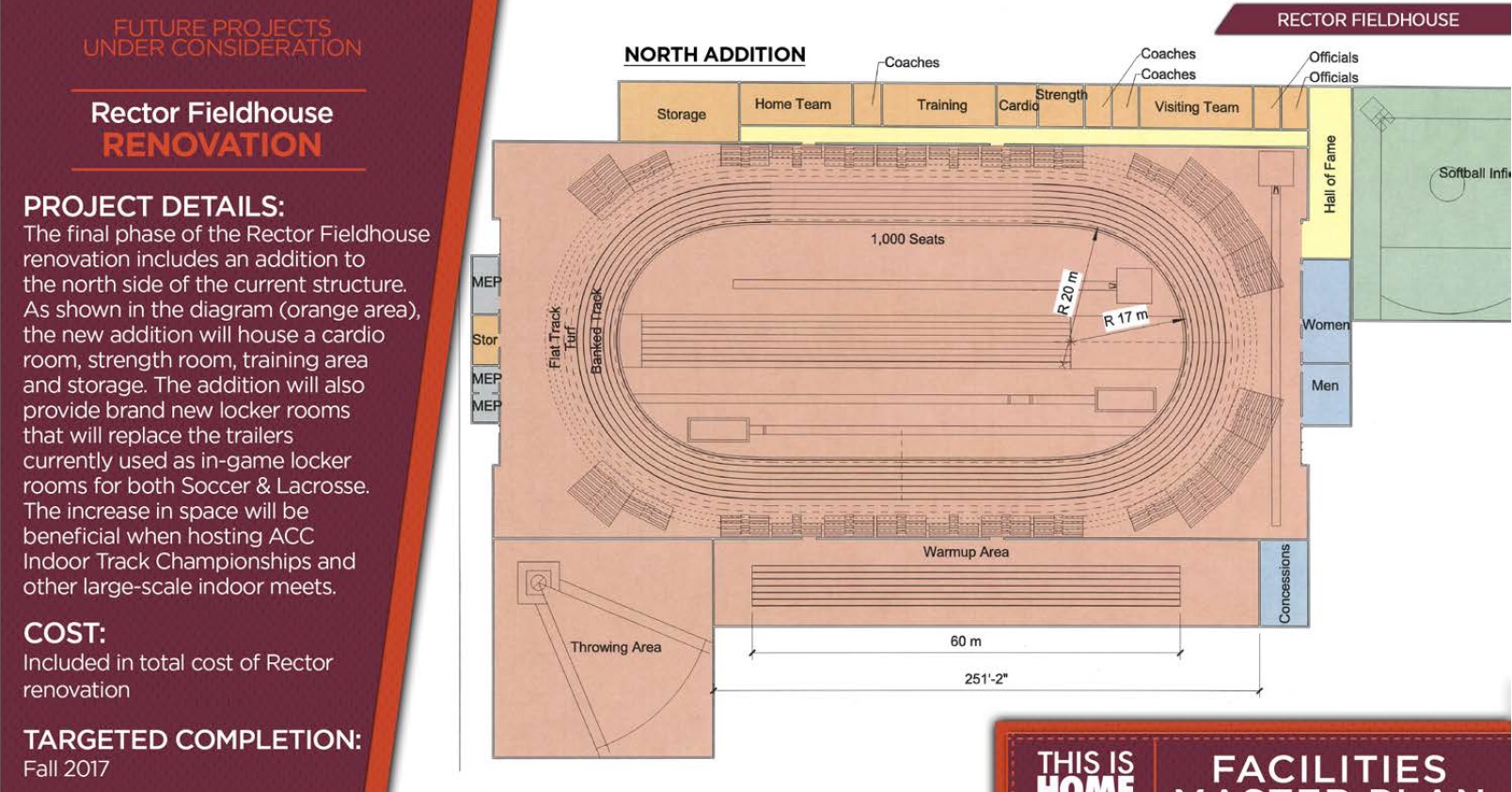 Virginia Tech’s track programs will get a boost when Rector Field House is renovated.  The Hokies are already strong in track, and the addition of new training rooms, locker rooms, etc. should help recruiting even more.  The soccer and lacrosse programs will also benefit from the addition of new locker rooms.  Tech hopes to have that project finished by the fall of 2017. 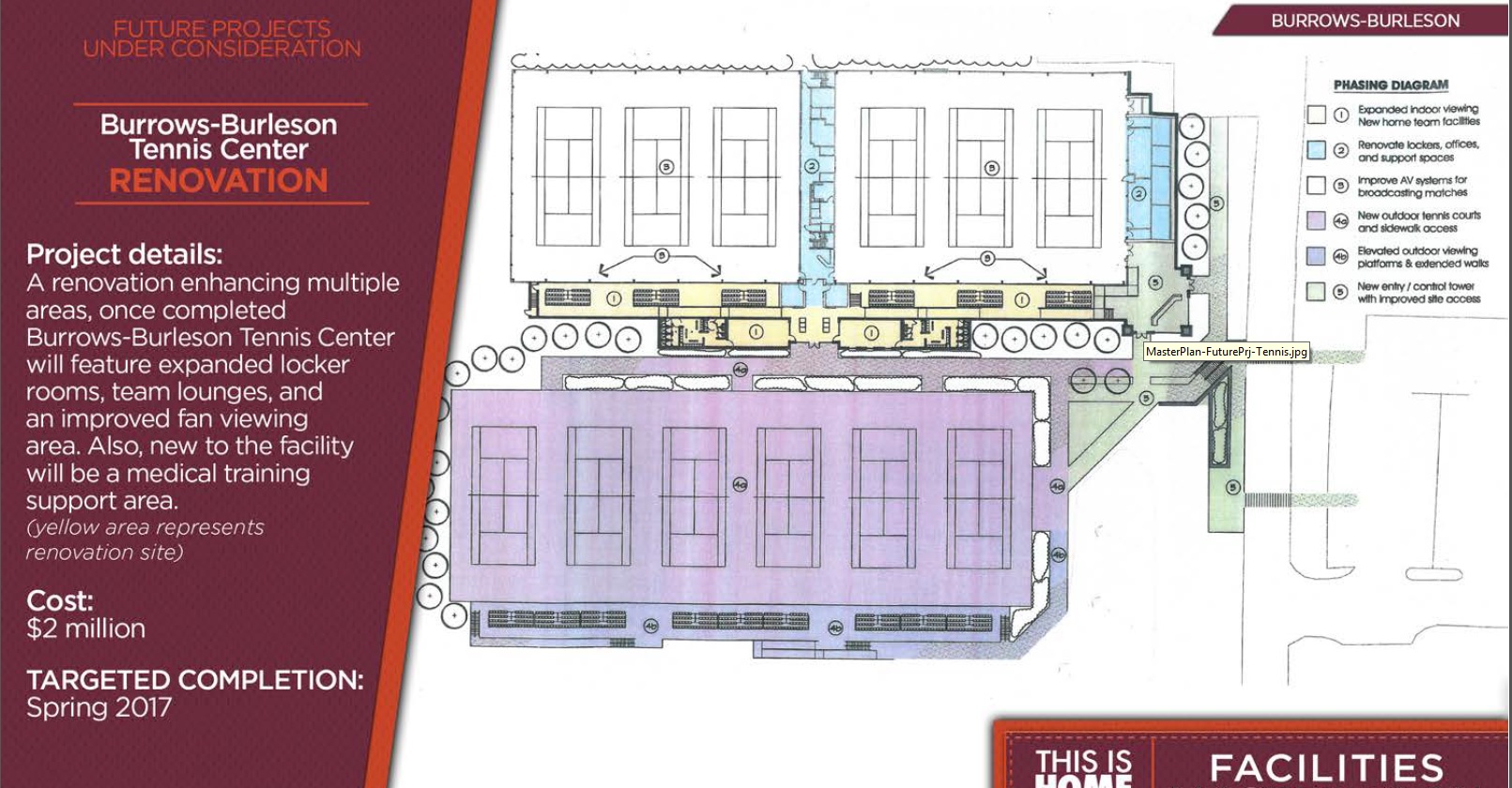 The Hokie tennis programs will be getting a huge shot in the arm thanks to the $2 million improvements to the Burrows-Burleson Tennis Center.  New team lounges and locker rooms are only part of the impressive redesign. 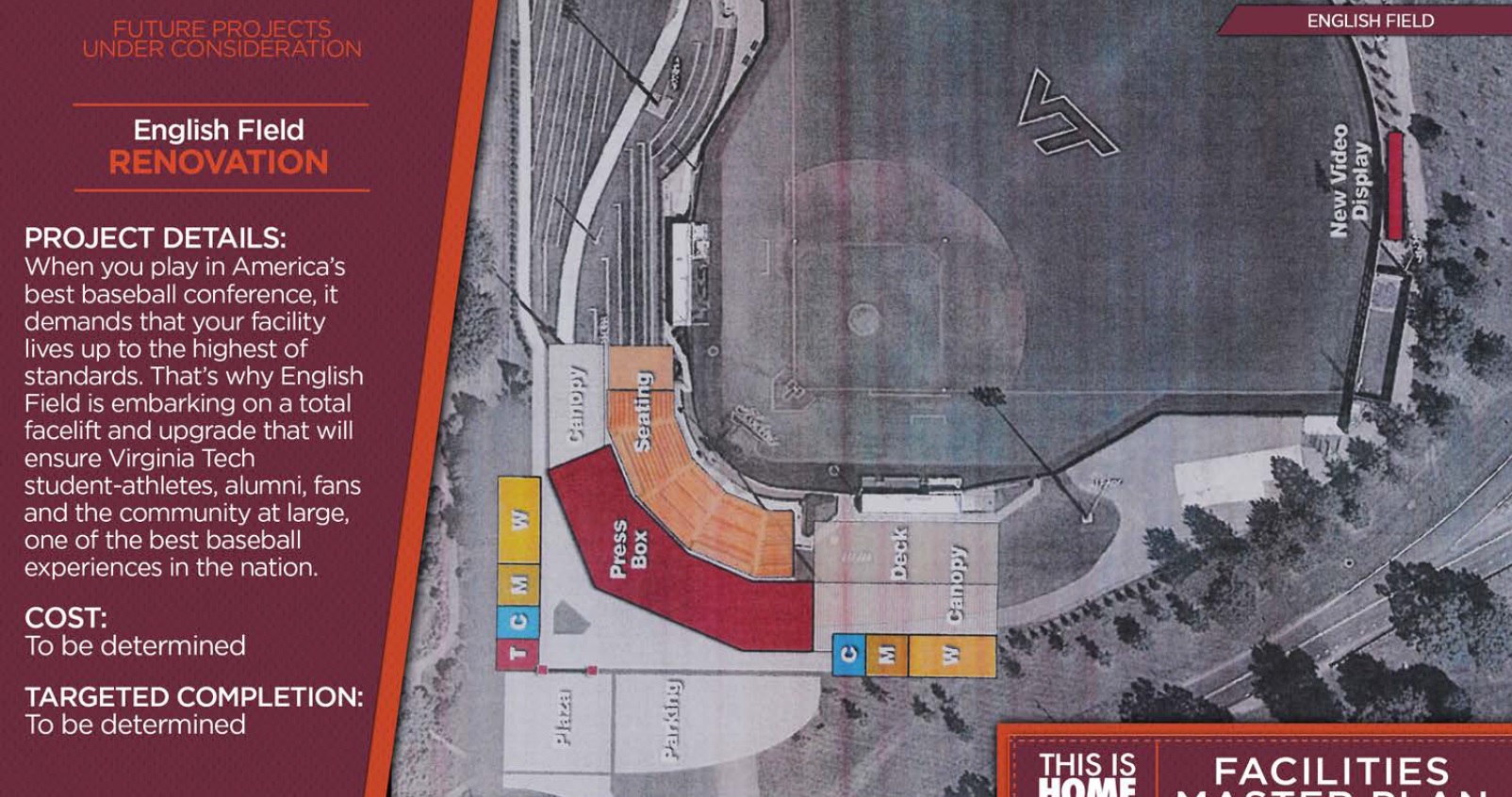 The English Field renovation is the biggest project in this set of projects, and it will cost anywhere from $10-18 million.  As you can see from the graphic above, it will add seating down the first base line, expanded press boxes, a video board, and much more.

However, you still can’t tell much from that image.  Try this one instead… 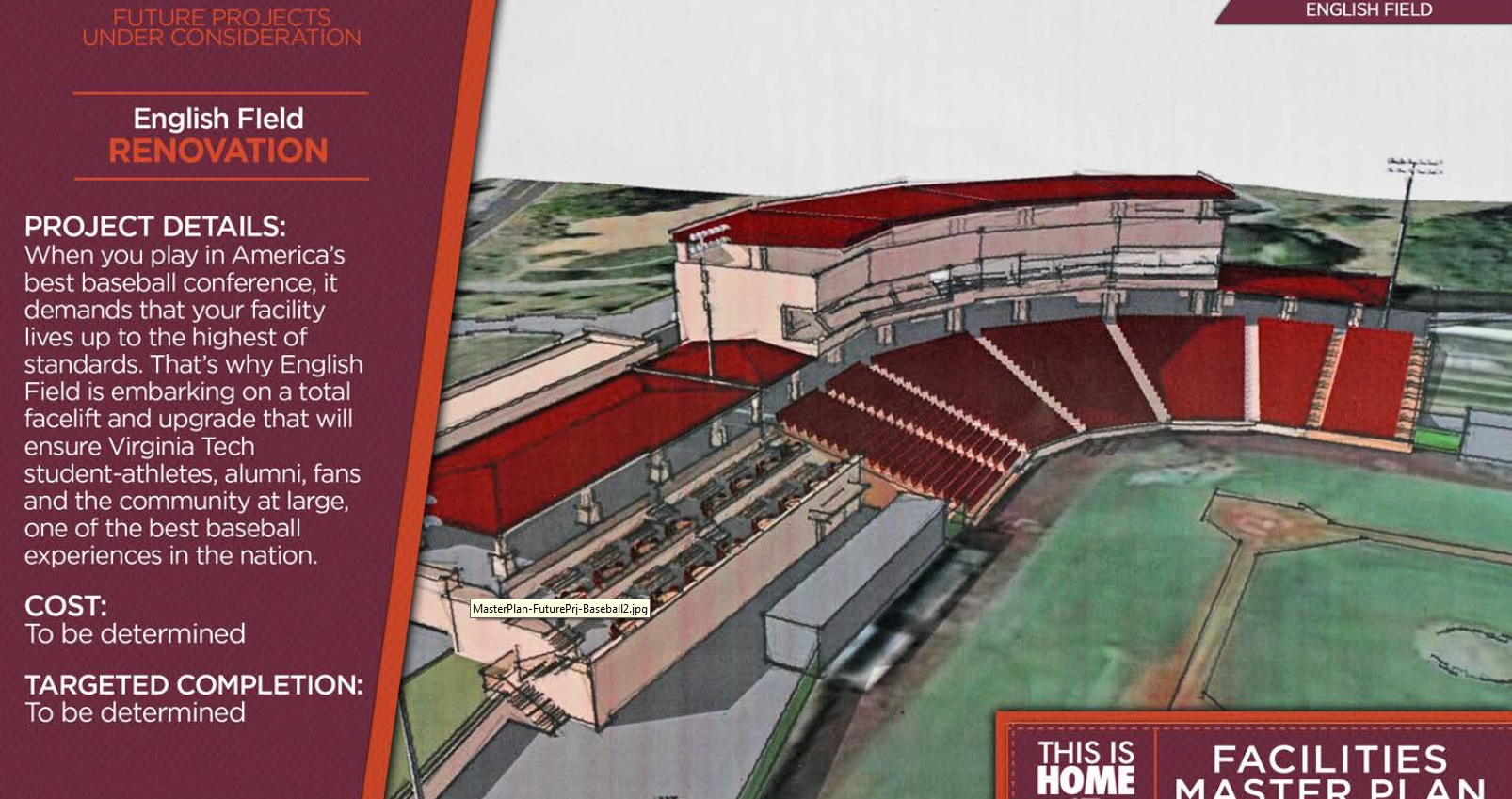 Keep in mind that the graphic above is simply just a mock-up.  The final design of the expansion has not been approved yet.  However, it will look something like that.

The Virginia Tech baseball program will finally have a stadium that can compare to the competition in the ACC and SEC (not to mention smaller programs such as Liberty and Coastal Carolina). 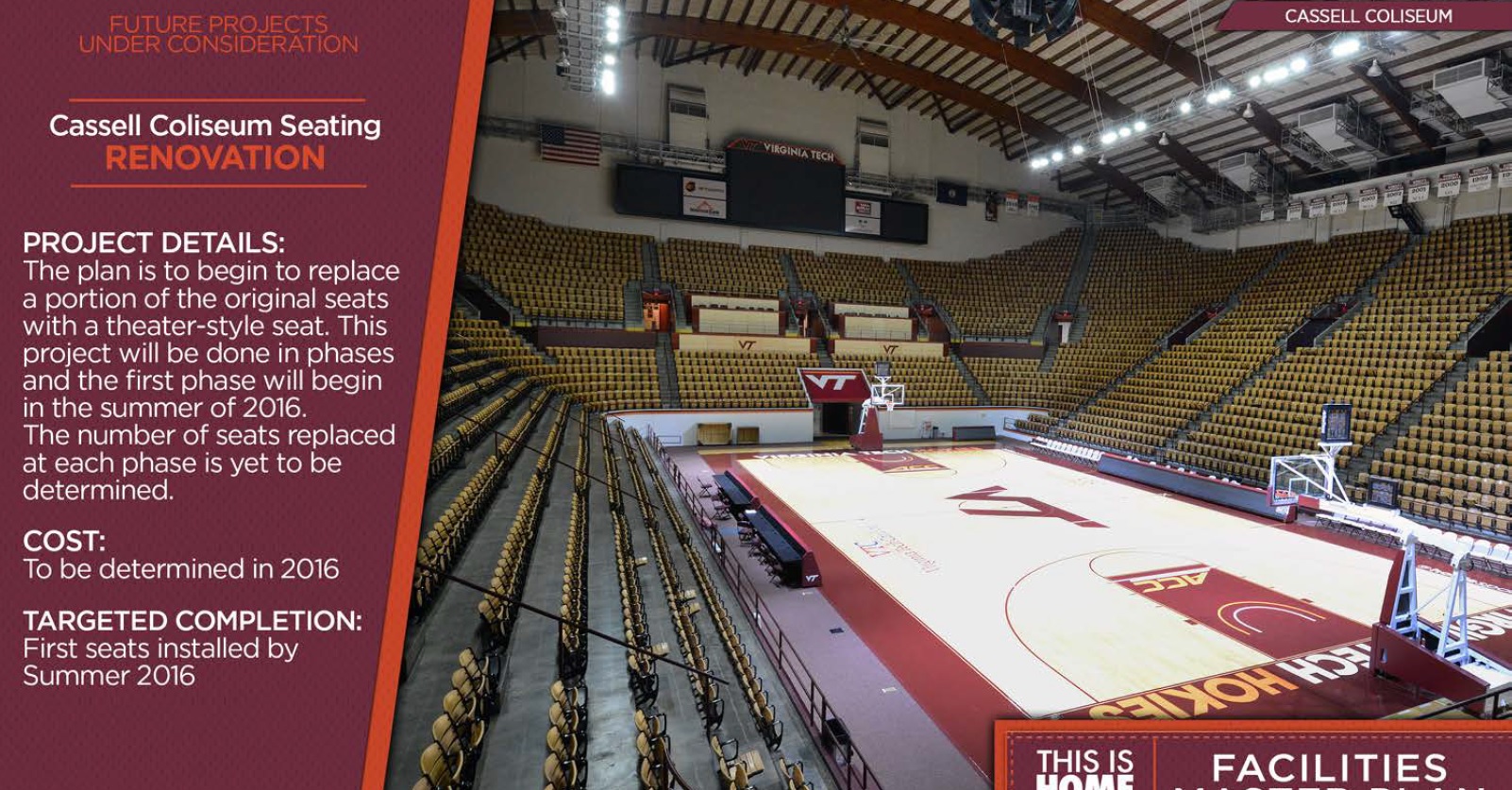 This graphic doesn’t show any mock-ups, but the plan is to start replacing some of the midcourt seats in Cassell Coliseum with bigger, more comfortable theater style seats.  This will lower the capacity in Cassell somewhat, though the exact number hasn’t been decided at this point.  The first phase of this project is expected to be completed this summer. 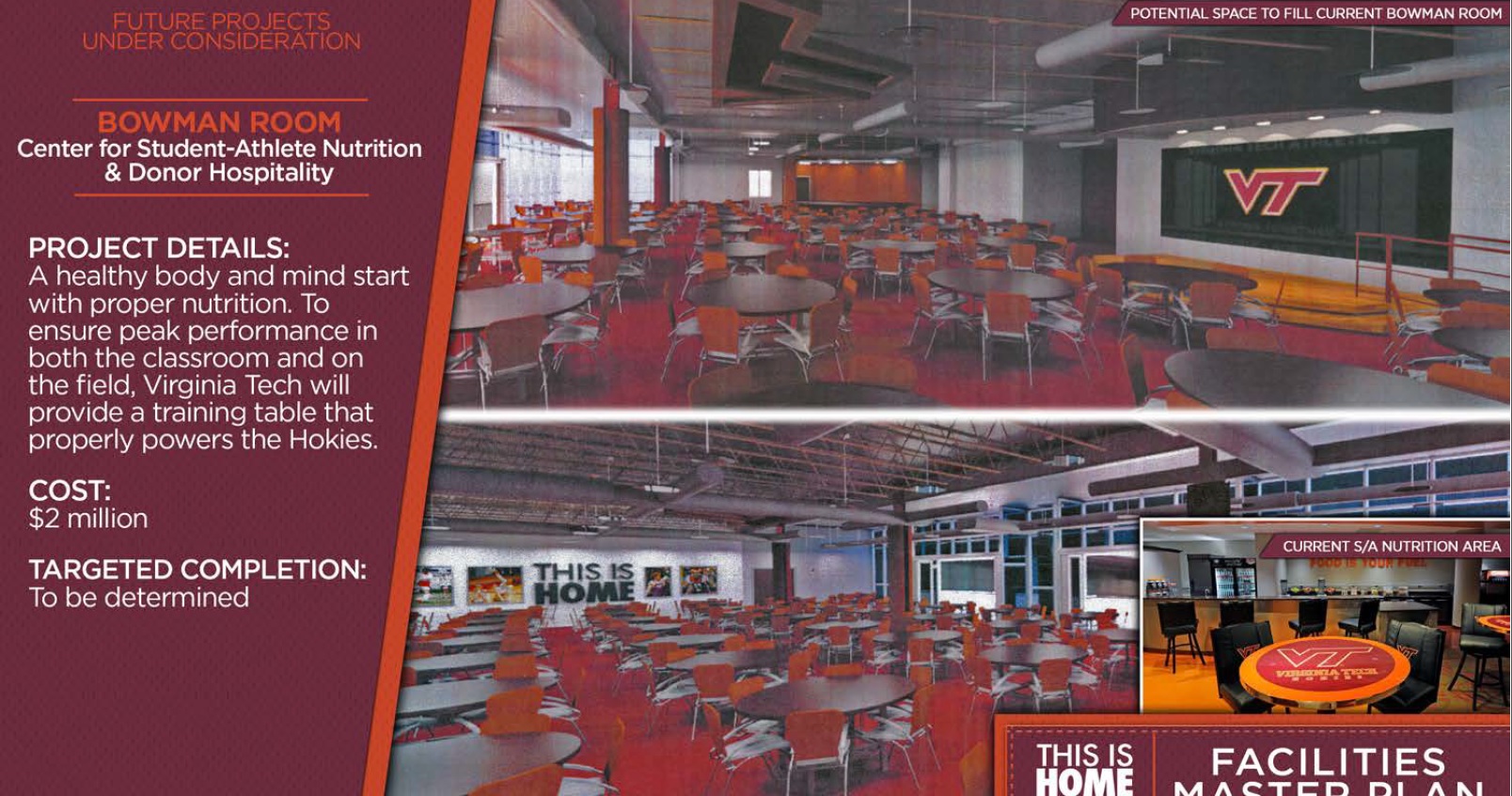 Virginia Tech is also planning massive improvements to the Bowman Room.  It will now fall in line with what the rest of the interior of the Merryman Center will look like after that renovation is complete.  The room will still be used to entertain donors before football and basketball games. 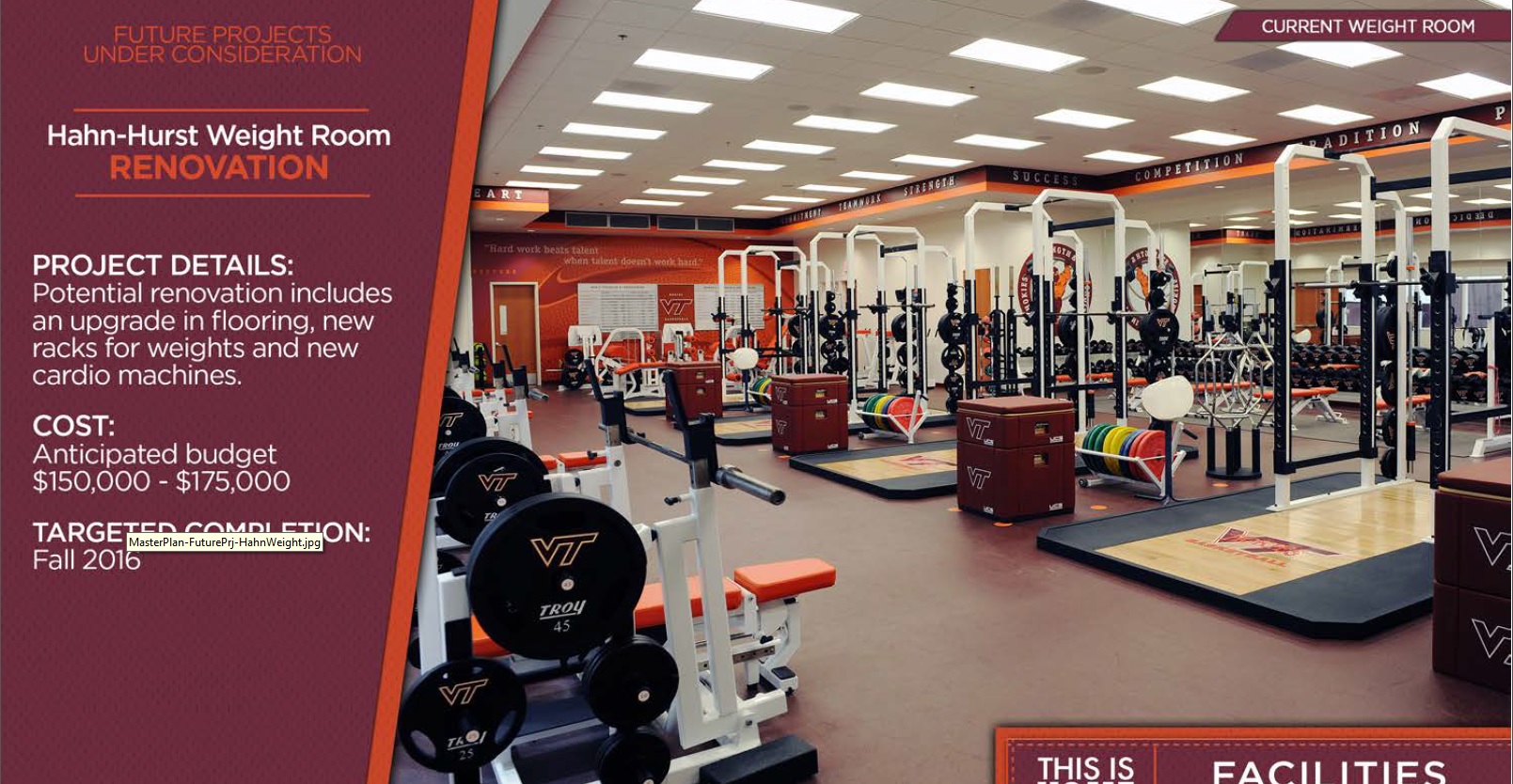 The weight room in the Hahn-Hurst Basketball Practice Facility will be getting a small upgrade.  The facility is still pretty new, but the Hokies have made constant changes to the interior over the years to fit the personalities and styles of each of their head coaches. 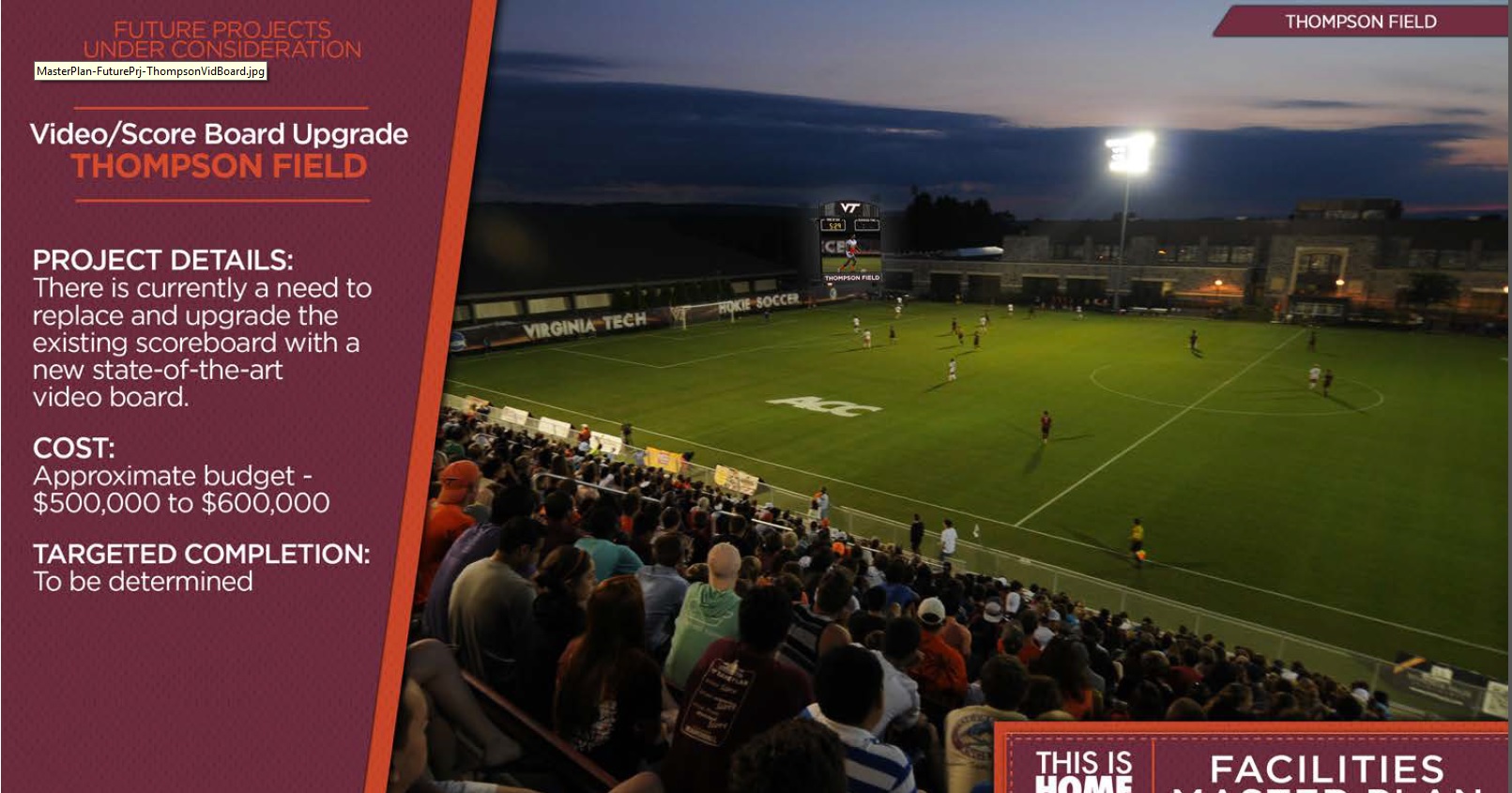 Thompson Field is a very nice setting to watch a soccer game.  The experience will now be even better, as the Hokies plan to spend between $500,000 and $600,000 on a brand new video board.  That should upgrade the fan experience, and it will also make the programs a bit more attractive to potential recruits. 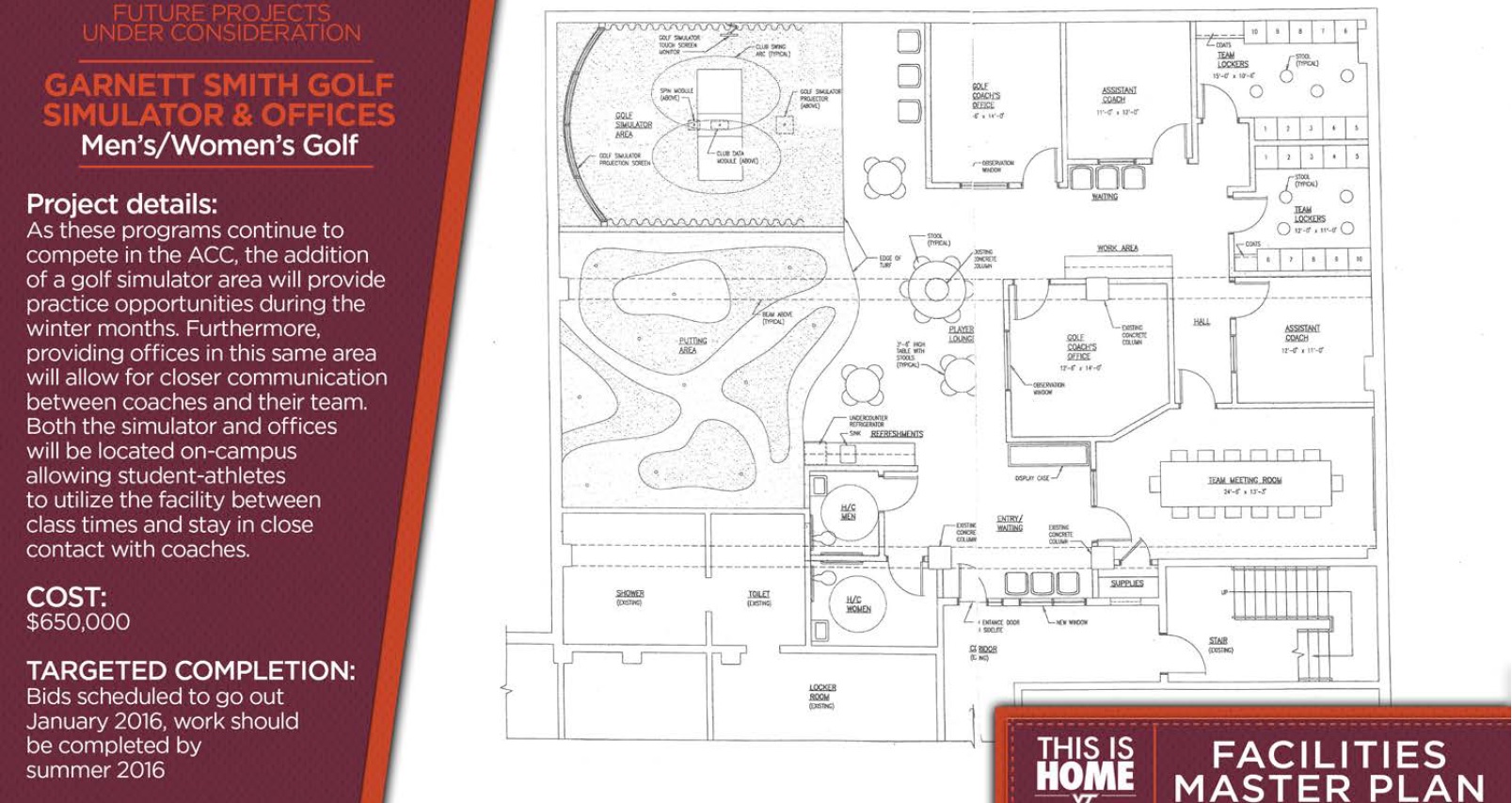 It might be tough to picture exactly what a golf simulator is, but the Tech golf programs are getting one. They are also getting new offices as part of this project, which will cost around $650,000.  It is scheduled to be completed sometime this summer. 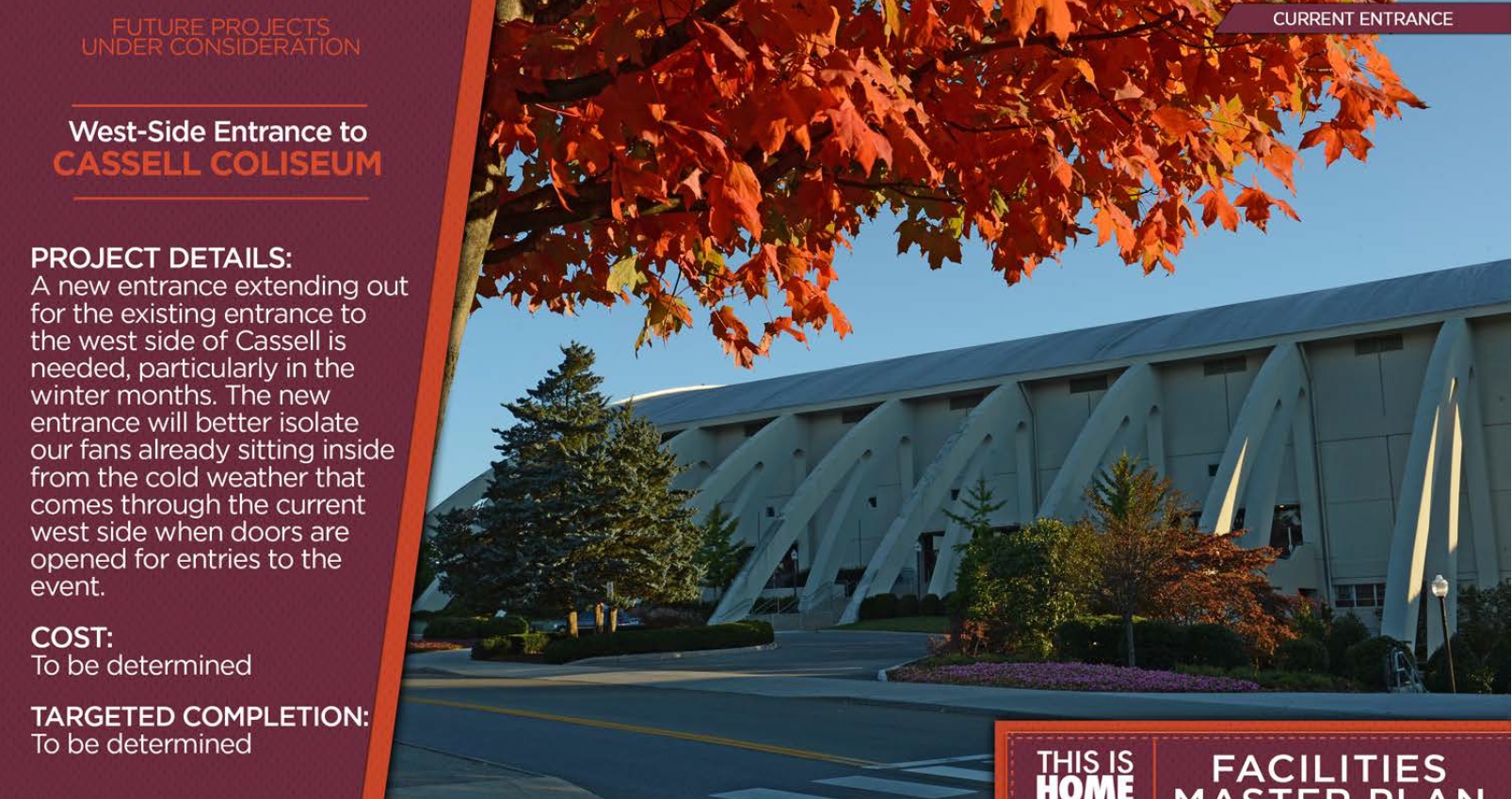 Virginia Tech plans to build a new entrance on the west side of Cassell Coliseum that extends out from the current entrance.  This is to protect fans, both inside and outside, from the cold weather.  Think of it as a really big arctic entry.  Currently there is no timetable for this project, and the cost is also unknown. 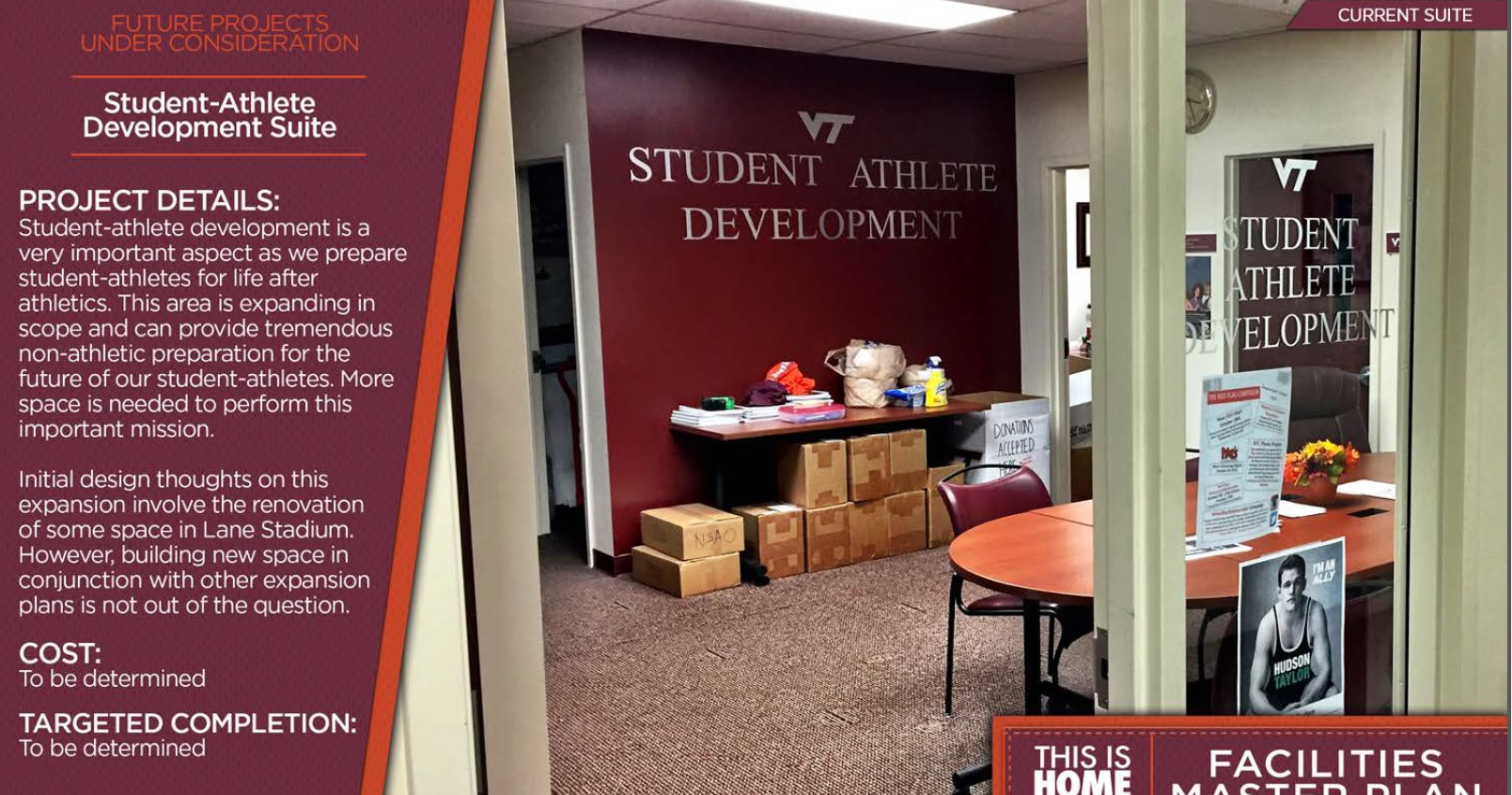 The athletic department also plans to expand their Student Athlete Development Suite.  However, as you can probably tell from the wording in the graphic, this project doesn’t appear to be far along at this point in time.  The cost is unknown, the timing is unknown, and even the location seems to be unknown. 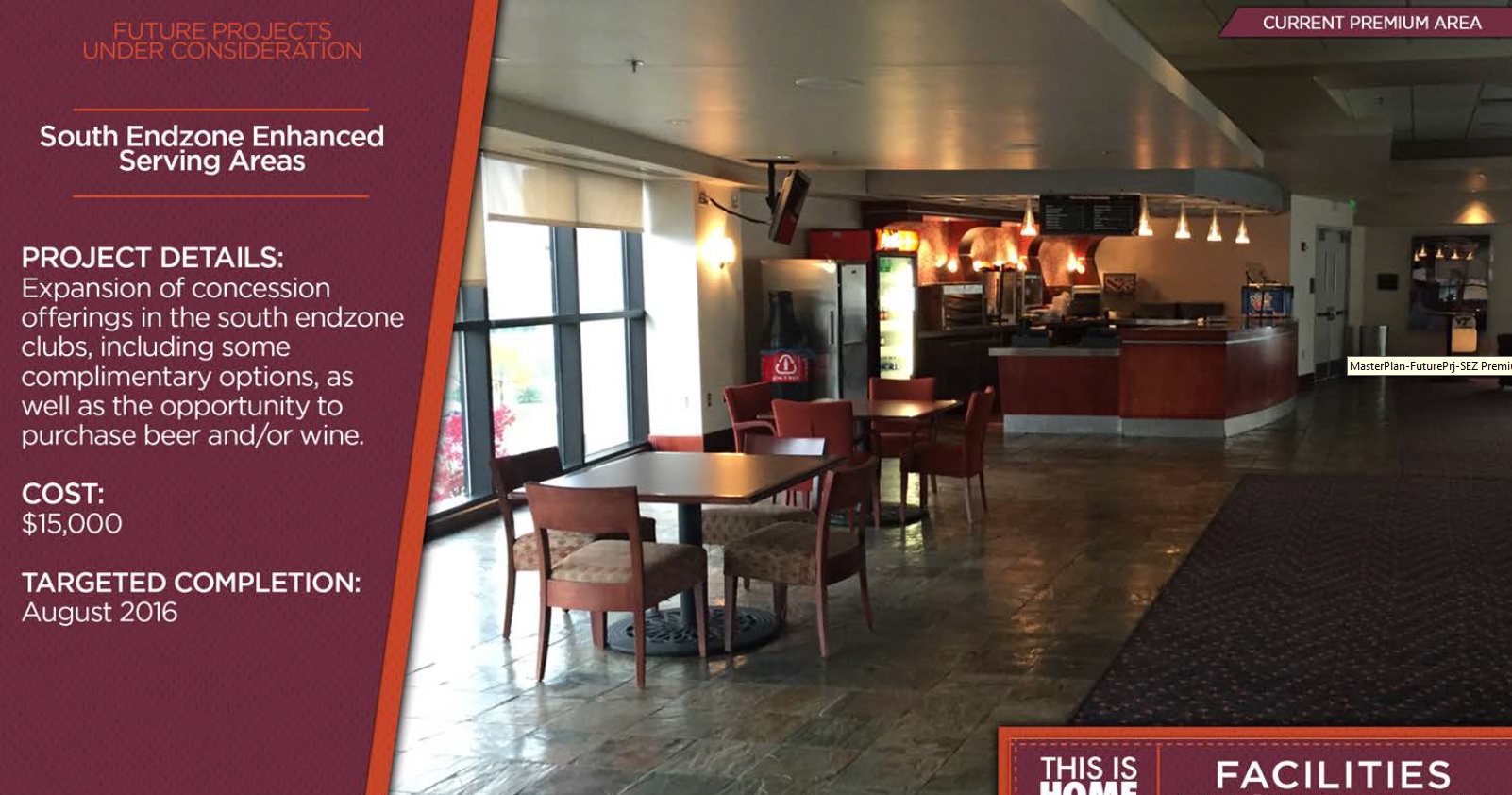 The Hokies are also spending a paltry $15,000 to update the concession offerings in the South Endzone  club areas.  These fans will also now be allowed to purchase alcohol during games, which brings the South Endzone clubs in line with the West Side clubs.  This project will be ready for the 2016 football season. 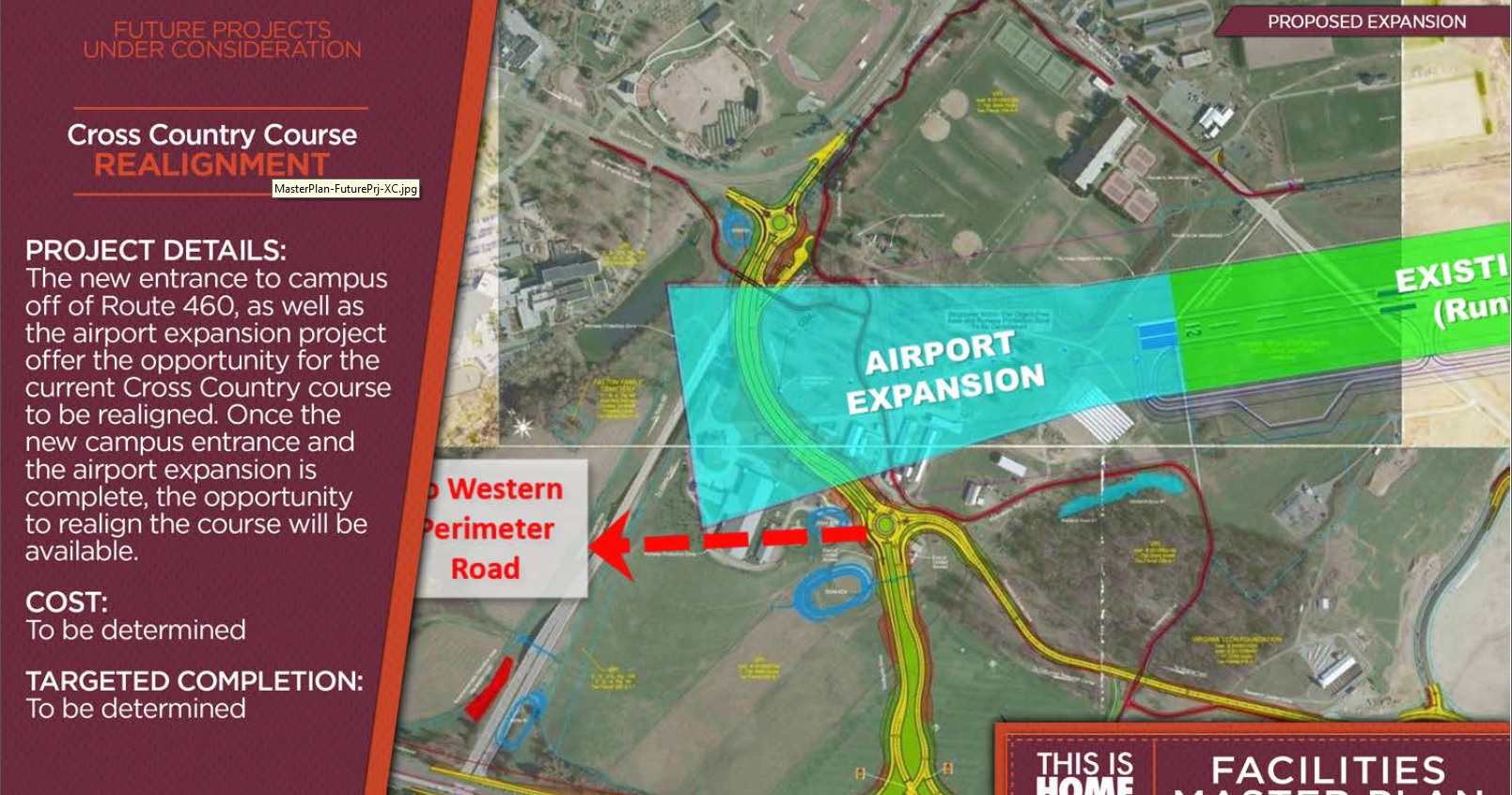 Virginia Tech’s cross country course will have to be re-routed because of the expansion to the Virginia Tech Airport.  Cost and timing are to be determined.

Here are the known costs so far…

Costs aren’t yet known for some of the other projects that are planned, but we’ve heard that Athletic Director Whit Babcock plans to ask the Board of Visitors for authorization to take out a loan of approximately $30 million in their June meeting.

There have been a lot of facilities improvements at Virginia Tech over the years, particularly during Jim Weaver’s tenure (1997-2013) as athletics director.  However, this marks the first time that the Hokies will potentially take out a substantial loan for a project that is focused mostly on the non-revenue sports.  On a related note, Tech is expected to be able to pay for all or most of their $20 million Indoor Football Practice Facility through private donations, which obviously makes this $31 million project more feasible.

Source for information and graphics (87 MB PDF): Intercollegiate Athletics report to the Student Affairs & Athletics Committee of the Board of Visitors