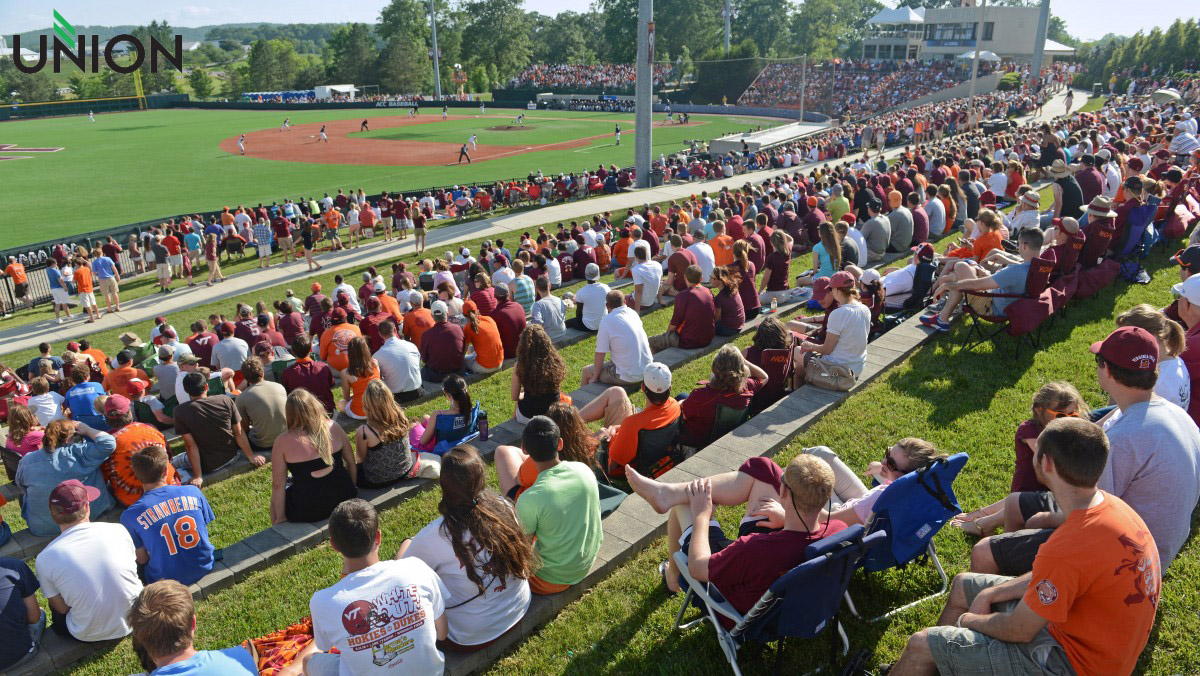 Last week, Virginia Tech announced a $3.5 million naming rights deal with Union Bank & Trust that will pay the athletic department $350,000 per year over the next 10 years. In return, English Field will now be English Field at Union Park, and it will undergo major renovations between this fall and Opening Day of 2018.

The improvements will include premium seating, a new clubhouse, a video board, modernized concession areas, a new entrance to the stadium, a new patio area, plus many other amenities. This has been in the works for approximately one year.

Union purchased StellarOne in 2014, and StellarOne already had pre-existing relationships in this part of the state. Union went on to do some sponsorships with the Virginia Tech Athletic Department, and they also endowed a professorship in the Center for Innovation and Entrepreneurship.

“We had that relationship with Virginia Tech, and it was going pretty well, so they started to approach us about a year ago about the baseball opportunity,” Bill Cimino, Vice President and Director of Corporate Communications at Union Bank & Trust, told TSL in a recent interview. “We met with Whit [Babcock], and we got sort of an overview of his vision for facility improvements… the company had never done anything this large or had naming rights before, so from our side, we were pretty cautious about it. We wanted to make sure we had a full understanding about where Virginia Tech was going.”

That, of course, required a meeting with Virginia Tech president Tim Sands.

“We also wanted to understand where the university was going as well, so we met with Dr. Sands,” Cimino said. “We heard from him about his vision about where he wants to take Virginia Tech and the growth opportunities he sees for the university. Once we heard that, and combined with what they want to do on the athletic side, that really sort of clinched the deal with us.”

The final design of English Field at Union Park is still to be determined, but ground is expected to be broken this fall. The work should be completed by the start of the 2018 season.

Location of the park was a big key in Union’s decision to partner with Virginia Tech on this project. English Field at Union Park will be one of the first things visitors see when they enter Virginia Tech’s campus, assuming they take the main entrance off 460.

“They are redoing the entire entrance to Virginia Tech with the airport expansion, and we wanted to get an idea of what that would mean from a visibility point of view,” Cimino said. “It’s really sort of the front porch of Virginia Tech.”

That project is expected to be finished by late 2018, and it will feature a roundabout at the intersection of Southgate Drive and Duckpond Drive. When people reach that intersection, the first thing they’ll see is a much improved baseball stadium that features the Union Bank & Trust brand.

Though it sounds like a no-brainer, at first it was not an easy decision for Union to make such a large financial commitment.

“[Executive Associate Athletics Director] Desiree Reed-François and her team are really good at coming up with good ideas about building the brand,” Cimino noted. “That really resonated with us, and it helped make all the numbers work.”

Of course, Whit Babcock played a huge role as well. Babcock already has a bit of a reputation as a salesman after hiring first Buzz Williams, then Justin Fuente, and now Kenny Brooks to coach the women’s basketball program. Cimino was very detailed in his praise of Babcock throughout the entire process.

“As for Whit, one thing always stood out to me. He never made a promise he couldn’t deliver. In our talks, he was clear about what could and couldn’t be done. Some people give you the answers you want to hear, but Whit was always a straight shooter. If he couldn’t do something, he told us, and he was consistent in his answers from the beginning. There are things he would like to see happen down the road, but he always made sure to differentiate aspiration from concrete deliverables. That may sound typical, but it’s not always that way when you’re making a large donation. I can easily see why people, particularly coaches, would want to work with him.”

That sounds exactly like the Whit Babcock that has been described to us over the past two years. He and his staff showed the people at Union that they were dedicated to baseball, even during the middle of the football coaching search.

“They had just finished a meeting with Coach Fuente in Tennessee, and they had just gotten back really early that morning,” Cimino said. “Then they drove up to Richmond to meet us…that showed a lot of commitment. Seeing how they were treating baseball at that time when he was in the middle of one of the most important hiring decisions he was ever going to make, but he’s still focused on baseball, and to us that showed a lot of commitment.”

While this was a good business deal for both parties, it was more than just business to Cimino, who graduated from Virginia Tech in 1993.

“It was a lot of fun,” he said. “You had to separate the fan from the business side of it, but that’s where the math comes in. But to be able to be a part of this, to be able to give back to the university … personally it was pretty exciting.”

Final design decisions for English Field and Union Park should be forthcoming at some point this summer. Like everything else Whit Babcock has done since his arrival, you can expect Virginia Tech to aim high.