If you are reading this, odds are pretty good you are fan of Hokie sports. As a fan of Hokie sports, you are well aware our success on a national level has been limited.  For me, I’ve pretty much come to expect it, but always fall victim to the following sequence of emotions when we compete on the biggest of stages:

The NCAA tournament is one of the biggest stages in wrestling, and really is the crown jewel of the sport in America. All season long, head coach Kevin Dresser stated our goal was to “Raise the Bar” and improve our performance at this tournament.  “Raise the Bar” may come across as a generic rallying cry that looks good on T-shirts, hashtags, and email signatures, but specifically he was referring to the team’s goal of bringing home an NCAA tournament trophy, which means a top four finish at the NCAA tournament.

As the NCAA tournament kicked off Thursday morning, I predictably found myself bursting at the seams with “Irrational, optimism”, and with good reason:

We had, however, just slipped up and finished second to NC State in the ACC Tournament, so maybe some rational thought should have tempered my expectations….but forget that. We were bringing home a trophy.

Thursday didn’t start well. Four of our eight wrestlers lost in either the first or second round (NCAA wrestling tourney is double elimination, so they were still alive in the consolation round), and one of our four quarter finalists was clearly suffering from a rib injury.

Thursday was less than ideal, but Friday morning was a catastrophe.  We stumbled through a 1-for-4 quarterfinal round, with Ty Walz being the only bright spot as he advanced to the semifinals and locked in his spot as an All-American (top 8 or better). Making the semifinals in this tournament is huge with respect to team points. It guarantees you at least a 6th place individual finish and six team points, so only having one semifinalist wasn’t exactly the game plan.

Oh, and I have yet to mention Friday morning’s biggest disaster.  Our highest seeded wrestler, #2 Joey Dance, destroyed his ankle in his first consolation match.  He tried to gut it out and miraculously managed a take down in the third period, but still Dance fell 4-3 and was eliminated after scoring only one team point.  For the second year in a row, Friday morning had chewed up and spit out the Hokie wrestling team.  Goodbye “irrational optimism”, hello “Swift, deflating defeat”.  I had accepted that a top four finish was out of reach.

Dresser’s team had other plans.

In this tournament “The Blood Round” is the final elimination round for All-American status. Lose and you go home, win and you will forever be remembered as an All-American. Tech entered The Blood round in ninth place with 30.5 points. They then proceeded to quickly and effectively burn down Madison Square Garden:

By the time the Blood Round ended, the Hokies had secured a program best six All-Americans.  We weren’t perfect Friday night.   Walz attempted to wrestle a bull in his Semifinal match, falling 10-6 to 2015 Freestyle World Champion Kyle Snyder of Ohio State. Zach Zavatsky fell one match short of AA Status, but that was it. The other five wrestlers went 10-0 Friday night, skyrocketing us back into the team race.

If you are familiar with the internet, I highly recommend you watch Friday night’s Blood Round matches on ESPN3.  The raw emotion shown by David, Nick, and Jared during their celebrations will make you proud to call them Hokies. The only thing better is probably watching the champions celebrate with their families after the finals. After securing AA status, all five of these guys destroyed their next opponents.  If you tuned to ESPN late Friday night hoping to catch Basketball highlights you may have seen this: 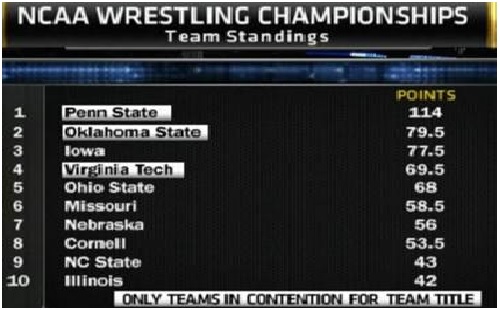 While the note regarding us still being alive for the team title is a nice visual, it wasn’t a reality.  Penn State had the team race locked up.  What was realistic though were our chances of staying ahead of Ohio State, or maybe even catching that 3rd place team. Could we really finish ahead of a historic powerhouse program like Iowa? Wait, don’t Iowa and Virginia Tech have a little bad blood?  Why yes, yes they do. Let me catch you up:

I am just a fan, with zero connections to the program.  I don’t know Dresser’s exact feelings toward Iowa. It is the school he wrestled and won a national championship for, but I’m pretty sure it’s not all warm and fuzzy between him and Iowa since Tom Brands left the cupboard completely bare for him at VT.

The other reason I feel that way is because of a February interview with Mat Talk online host Jason Bryant.  In this interview, Coach Dresser had the opportunity to politely state his regret for not being able to wrestle Iowa in this year’s  NWCA “Bowl Series”.

Instead he called Iowa an expletive and said they ducked a possible match up with VT. Realizing it might be frowned upon to call another team that word, but still wanting to call them that word several more times, Dresser said “I’ll use nicer word, I’ll come up with a neutral word, like, orange…so they’re oranges”.  From that point on the VT wrestling team and fanbase fully embraced the term “Oranges”.

So as I said, it can’t be all warm and fuzzy with Dresser and Iowa.  I’m also pretty sure current Tech assistant coach Mike Zaddick, wasn’t too happy about being unexpectedly replaced on the Iowa staff in 2012.

So here we are Saturday morning, and we’re eight points behind the Iowa Oranges on the final day.  Tech had six wrestlers still alive, all in the consolation bracket.  Iowa had two wrestlers in the 7/8th place match, one still in contention for third, and three in the finals.  Beating Iowa was a tall order, but still possible.  Zach Epperly and Nick Brascestta finished out incredible tournaments and both placed third.  Ty Walz won his consolation semifinal, but fell in overtime to 10’9” Adam Coon of Michigan.  Iowa only managed to win one consolation match, and that was it before the finals.   Tech had no more wrestlers, but had pulled ahead of Iowa by one point.  Iowa still had their three finalists to wrestle in the night session. Iowa couldn’t go 1-7 all day Saturday and finish behind lowly Virginia Tech could they?

Mission accomplished, bar raised, oranges squashed. Even though Ohio State knocked us out of third place, it’s almost better in a way because it meant Iowa went home with no team hardware, losing to us by one point.

Saturday was far from the team national title that Hokie fans crave for in any sport, but our wrestling  team delivered a much needed taste of success. Only Nick Brascetta graduates from this year’s team, so I can’t wait to see what next year brings. For now, let’s enjoy this taste of success.  Also enjoy this video of Ty Walz  holding our team trophy in his right hand and an orange in his left. It was a pretty fitting summary of our season.

“Swift, deflating defeat”, you never had a chance.