Virginia Tech will take on the Princeton Tigers tonight in Cassell Coliseum in the first round of the National Invitational Tournament.  If the Hokies win, they’ll face either #2 seed BYU on the road or #7 seed UAB in the second round.

Beating the Tigers won’t necessarily be easy, though.  Princeton went 22-6 this season, with five of their six losses coming to NCAA Tournament teams.  They are very efficient on the offensive end of the court, and their basketball IQ is extremely high.  They are averaging 79 points per game, so the Hokies will have to bring it defensively by playing disciplined basketball against the tough Princeton Offense.

More on that offense later.  For now, here’s a look at Princeton’s starting lineup…

As you might expect, the Tigers are outstanding from behind the arc.  They are shooting 38.8% for the season (21st in the nation out of 351 teams), and they are also a 70.7% free throw shooting team.

The Princeton Offense is what makes this Princeton team so dangerous.  If you’re wondering what the Princeton offense is, here is a description from a 2009 New York Times article:

“The Princeton Offense is an offensive basketball strategy which emphasizes constant motion, passing, back-door cuts, picks on and off the ball, and disciplined teamwork.  The offense is designed for a unit of five players who can each pass, shoot and dribble at an above average level. It attempts to isolate and exploit a mismatch using these skills. Positions become less important and on offense there is no point guard, shooting guard, small forward or power forward.”

According to Buzz Williams, the Princeton offense attempts to take advantage of a team’s defensive instincts by doing the opposite of what they’ve seen all season.  Williams coached against John Thompson III, who runs the Princeton Offense at Georgetown, but his current Tech team has never gone head-to-head with anyone who runs that offense.  It takes a lot of discipline, and it’s very important to defend for all 30 seconds of the shot clock.

Despite the difficulties of defending the Princeton Offense, Virginia Tech has the advantage in the game.  They are the more talented team, and they are playing their best basketball of the season right now.  Perhaps more importantly, they are playing at home.  The Tigers went 13-0 on their own homecourt, but went a total of 9-6 away from home (9-5 in road games, 0-1 on neutral sites).

Cassell Coliseum has proven to be a very tough place to win since ACC play began.  The Hokies have defeated two top 10 teams at home, and went a total of 7-2 on their homecourt during ACC play, with the only losses coming to #1 NCAA seed North Carolina and a Top 25 Louisville team.  Tech should be able to beat the Tigers and advance to the round of 16, but how they respond to the Princeton offense is a concern. 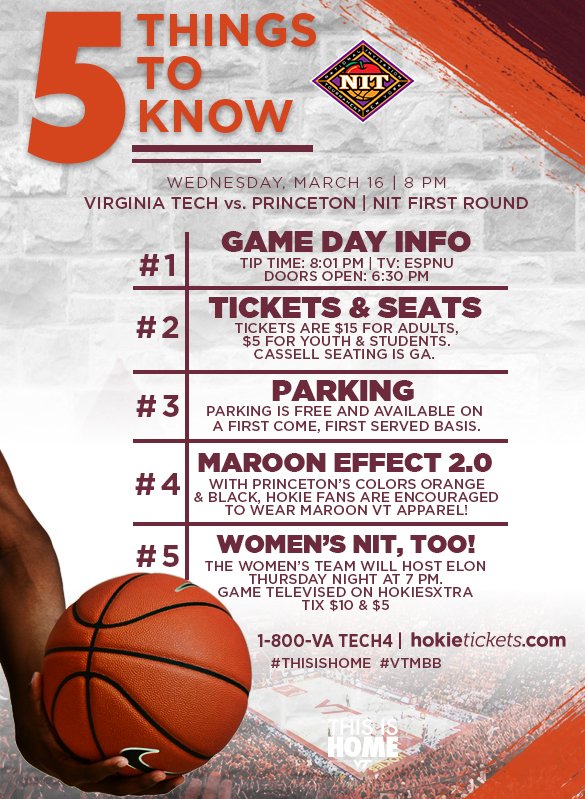