The ACC Tournament started yesterday, with NC State and Florida State picking up wins. However, Tech’s tournament doesn’t start until tonight, and five teams will have been eliminated by the time the Hokies take the court for the first time.

Buzz Williams’ team finds itself in a favorable bracket based on regular season results.

Buzz Williams has basically been a .500 coach in conference tournaments during his career. Unless you are coaching at a basketball powerhouse, it’s hard to do much better than that.

We could sit here and preview every single team that the Hokies could potentially face in the tournament, but we’ve already done that at least once at some point during the regular season. Instead, we’re going to talk about RPI and strength of schedule scenarios for the ACC Tournament.

Virginia Tech is still in the running for the NCAA Tournament. Though their chances are extremely slim, we’re still going to cover five different scenarios that we could see over the next few days. Obviously Tech would have no chance if they lose to Florida State tonight, and they would be an automatic bid if they manage to win the tournament. However, what happens if the Hokies go 1-1, 2-1, or 3-1 over the weekend?

Keep these numbers in mind. They are Tech’s current computer numbers:

Note that these projected numbers won’t be 100% accurate, because the results of other games will also impact Tech’s RPI and strength of schedule. However, in most cases they’ll be very close.

This scenario would provide a modest boost to Virginia Tech’s strength of schedule, but it wouldn’t do much for their RPI. They would stand no chance of making the NCAA Tournament in this scenario. On the other hand, it would likely lock up a bid to the NIT.

Virginia Tech’s strength of schedule would jump up to #33 in the country if they make the ACC Tournament semifinals and lose to Virginia. However, their RPI would still only be #74 in the country, and that wouldn’t be enough to get them into the NCAA Tournament.

An RPI of #65 isn’t particularly high. In fact, it’s only slightly better than the USC team who made the field in 2011 with an RPI of #67. That Trojan team had the worst RPI of any team to ever make the field as an at-large. Their overall strength of schedule was #37, so the Hokies would have a chance to sneak into the field with a very similar RPI and a slightly better strength of schedule. Still, Tech’s chances would also depend on other bubble teams.

An RPI rating of #68 has not been good enough in the past to get into the tournament as an at-large team.

Likewise, a victory over Clemson would raise Tech’s RPI to #68, which probably wouldn’t be enough. Their strength of schedule would only jump up to #35, because Clemson’s computer numbers aren’t quite as strong as Virginia Tech’s.

So, there you have it. Virginia Tech basically only has one chance to make the NCAA Tournament as an at-large. They have to knock off Florida State, Miami and Virginia. Anything else would leave them in the NIT, though of course they will improve their seeding in that field with a win or two in DC. Also, it would be idea for the Hokies if all the higher seeds in their bracket win. It’s good that Florida State beat Boston College, and it would be beneficial if UVA does not get upset by Georgia Tech or Clemson.

Of course, the easiest way to make the NCAA Tournament is to win the ACC Tournament. What are Tech’s chances of doing that? 0.26%, according to RPIForecast.com. That’s good, right?

To make a run, the Hokies first have to get past Florida State. They beat the Seminoles 83-73 in Blacksburg to start their current five-game winning streak. However, FSU has won three games in a row. That includes a 77-56 thrashing of Notre Dame, and a 78-73 win over Syracuse. They have a very talented, albeit young, team. Like the Hokies, they return almost all of their key pieces next year. Both teams will be expected to make the NCAA Tournament next season. 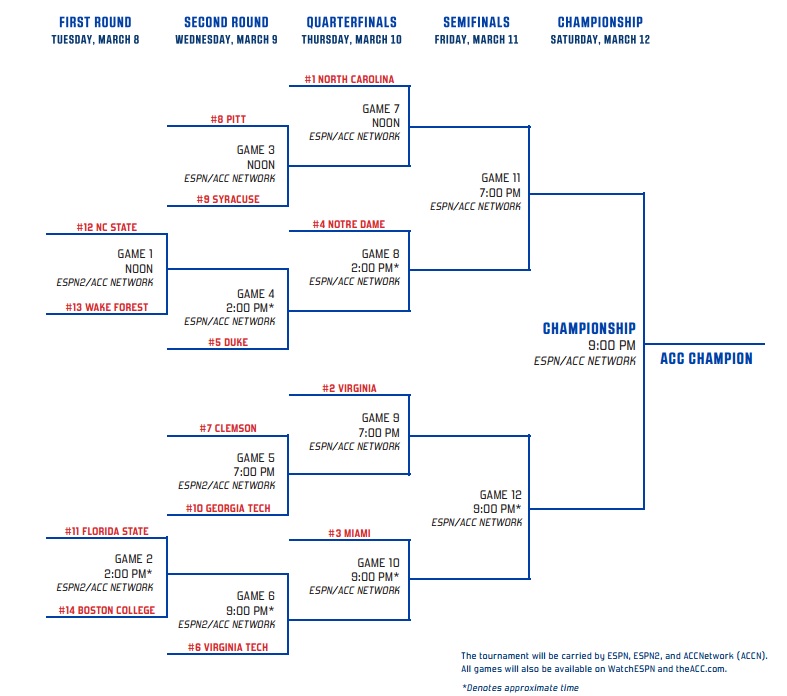