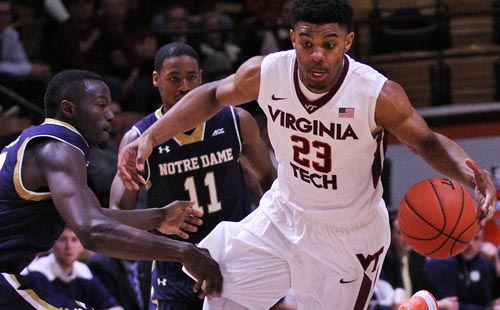 Thanks to losses by Clemson and Pitt on Tuesday night, the Hokies woke up this morning to find themselves in sole possession of second place in the ACC. That could be in jeopardy tonight however, as Virginia Tech will take on a very good Notre Dame team in the Joyce Center.

Notre Dame is 12-5 on the season, with a 3-2 mark in ACC play. They knocked off Duke 95-91 this past Saturday in a thrilling game in Cameron Indoor Stadium. They also defeated Iowa back in November, and the Hawkeyes are 14-3 and ranked #9 in both polls.

Notre Dame is one of the best offensive teams in the country, and that is obviously helped by the fact that they rarely turn the ball over. However, their defense hasn’t been good this year, and they are poor at forcing turnovers.

The Hokies are pretty mediocre in every category, though their turnover rate since ACC play began has been very impressive.

You’ve got to score at least 70 points to have a chance to beat Notre Dame. They are too good offensively to win a low-scoring affair. By the way, don’t laugh at that Monmouth loss. Monmouth is 14-4 with wins over Georgetown and UCLA, to go along with their victory over the Irish.

Notre Dame lost a lot of good players from last year’s Elite 8 team, but they are still extremely dangerous.

The Irish aren’t very deep. Three of their starters play 30+ minutes per game, and they often don’t play more than seven players. However, the guys they do play are very skilled. The Hokies will have to especially be mindful of the three-pointer…

Overall, Notre Dame is shooting 39.3% from the three-point line this year. They obviously have a very good big man on the inside in Zach Auguste, so this is a well-rounded offensive basketball team. The Hokies will have to play much better defense than they did in their last two games to have a chance to win, and they probably need to score at least 75 points as well.