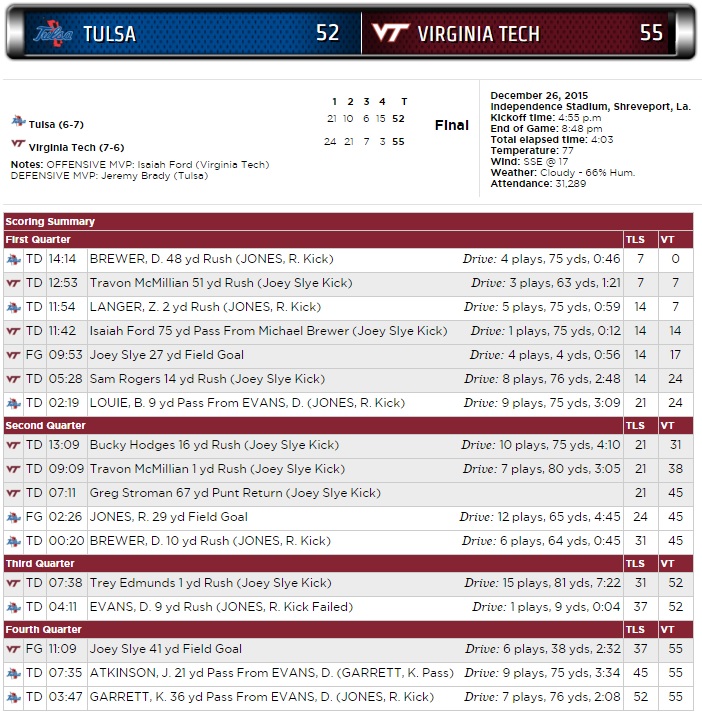 Virginia Tech got off to a blazing start, then held on to beat Tulsa 55-52 in the 2015 Camping World Independence Bowl, giving Frank Beamer his 280th career win and sending him out a winner.

The Hokies scored 45 points in the first 22:49 of the game, going up 45-21 on Greg Stroman’s 67-yard punt return for a TD with 7:11 left to go in the second quarter. But from that point on, it was tough sledding, and the Hokies scored just ten points the rest of the way. With 3:47 left, Tulsa scored on a 36-yard TD pass to cut the deficit to 55-52, and after a defensive stop, the Golden Hurricane took over on their own 20 with two minutes to go and one timeout left.

Five plays later, on 4th and 16 from the Tulsa 40, Tech’s Dadi Nicolas broke through and sacked Tulsa QB Dane Evans with 1:17 left to secure the win.

The Hokies outgained Tulsa 598-563. The 598 yards were the most amassed by Tech in offensive coordinator Scot Loeffler’s three seasons in Blacksburg, and the most by Tech since gaining 605 against Wake Forest on October 16, 2010.

It was an odd position for the offensively-challenged, defense-centric Hokies to be in, but they made it work. “I’ve been in a lot of games where the defense won it for us, but this wasn’t one of them,” defensive coordinator Bud Foster said after the game on the Tech radio network.

Two big offensive milestones were reached by Virginia Tech players during the game. Tech wide receiver Isaiah Ford had 12 catches for 227 yards and a touchdown, giving him a Tech-record 1,164 yards on the season, and extending his single-season TD record to 11. Ford is the first VT receiver over 1,000 yards in a season. Andre Davis had 962 yards and 9 TDs in the 1999 regular season, then added 108 yards and a TD (1,070 yards, 10 TDs) in the Sugar Bowl against Florida State, back when bowl games didn’t count in season stats.

The other milestone was achieved by tailback Travon McMillian, who gained 82 yards on 16 carries (2 TDs) to give him 1,043 yards for the season, the first time a VT tailback has run for over 1,000 yards since David Wilson set the single-season record with 1,709 yards in 2011.

The Hokies finished the 2015 season 7-6, their, 23rd straight winning season. The Independence Bowl wins of 1993 and 2015 serve as fitting bookends to Tech’s 23 straight bowl appearances.

“I may come back to Shreveport just for the hell of it.”