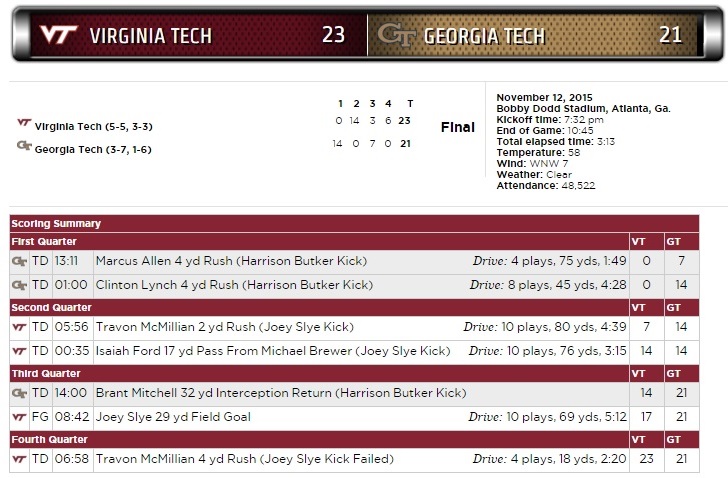 The Hokies overcame adversity – and themselves – to defeat Georgia Tech 23-21 in Atlanta on Thursday night. VT improved to 5-5 overall, with a 3-3 record in ACC play. The Yellow Jackets dropped to 3-7 (1-6) and are now eliminated from bowl contention.

Georgia Tech scored a touchdown easily on their opening drive, and later pulled ahead 14-0. Things weren’t looking good for the Hokies early, and though they fought back to tie the game at halftime, an interception returned for a touchdown early in the third quarter gave the Yellow Jackets a 21-14 lead.

Virginia Tech committed two turnovers, with both leading to Georgia Tech touchdowns. The Yellow Jackets turned the ball over three times, but the Hokies couldn’t turn the first two fumbles into points. They finally broke through in the fourth quarter, turning the final turnover into the go ahead touchdown.

This wasn’t an easy game, and though they might have done more damage to themselves than Georgia Tech actually did, the Hokies stayed the course. They didn’t lead the game until the 6:58 mark of the fourth quarter, and they walked out of Atlanta with the win.

Virginia Tech outgained Georgia Tech 343 to 258. That’s impressive considering the Yellow Jackets held the yardage advantage 87-1 after their first two drives of the game. It was one of VT’s most impressive performances against Paul Johnson’s offense. It marked only the third time that the Hokies have held the Yellow Jackets to under 300 yards of total offense as long as Johnson has been the coach.

Once again, Travon McMillian had a big game for the Hokies. The r-freshman had 24 carries for 135 yards and two touchdowns. His last five games have looked like this…

If McMillian keeps up the pace of the last three games, he will be Virginia Tech’s first 1,000 yard rusher since David Wilson in 2011. He currently has exactly 800 yards on 145 carries for an average of 5.5 yards per carry.

Virginia Tech did not get off to an auspicious start. The Yellow Jackets went right down the field and scored a touchdown on their first drive. A busted coverage by the Hokies allowed a 58 yard pass, and Georgia Tech punched it into the end zone shortly thereafter. It took them four plays and 1:49 to go 75 yards.

After the teams traded punts, Michael Brewer found Cam Phillips over the middle on third and one for what seemed like a big gain. Phillips made several defenders miss, but the ball was knocked free, and Georgia Tech fell on it at the Virginia Tech 45. Just when the Hokies were starting to get something going offensively, they handed the ball right back to the opposition.

Georgia Tech took advantage, going 45 yards in eight plays for a touchdown. Just like that it was 14-0 Yellow Jackets with exactly one minute remaining in the first quarter. It was not a good start for the Hokies, and it’s certainly not easy to come back from a 14 point deficit on the road against a team that likes the run the ball as much as Georgia Tech.

However, that’s exactly what the Hokies did. It wasn’t easy, but they outscored the Yellow Jackets 23-7 over the final three quarters of play. After their second touchdown drive, Georgia Tech’s offensive possessions looked like this…

It’s rare that the Georgia Tech offense gets dominated that badly. The Hokie offense needed to take advantage, and though it took them awhile, they were eventually able to overcome the Yellow Jackets.

Virginia Tech’s first touchdown of the game came with 5:56 left in the second quarter. Travon McMillian capped a 10-play, 80 yard drive with a two yard touchdown run off the left side. The VT offense had spent most of the first half not accomplishing much, but the Hokies trailed just 14-7.

The Hokies weren’t done. After Georgia Tech went three and out, the Hokies got the ball back on their own 24 with 3:50 remaining in the half. Travon McMillian broke off a 24 yard run on the first play of the possession, and Michael Brewer and Isaiah Ford eventually capped the drive with a beautiful back shoulder throw and catch for a touchdown that tied the game at 14. The Hokies held all the momentum heading into the second half.

Unfortunately, they gave the momentum back to the home team early in the second half. Facing third and 10 from his own 25 on VT’s first possession after half time, Michael Brewer dropped back to pass. Bucky Hodges was open on a crossing pattern, but Brewer threw it behind him and the pass was intercepted by Georgia Tech’s Bryan Mitchell. He returned it 32 yards for a Yellow Jacket touchdown to make the score 21-14.

Virginia Tech promptly responded with a 10-play, 69 yard drive that resulted in a Joey Slye 29 yard field goal. With 8:42 left in the third quarter, Georgia Tech led 21-17. At that point, things started getting outta whack, to steal a Frank Beamer term.

The Yellow Jackets fumbled on two of their next three possessions, but the VT offense was forced to punt on both occasions. Slye also missed a 40 yard field goal during that span, and the score remained 21-17 Georgia Tech as the game progressed into the fourth quarter. The Hokies were outplaying the Jackets, but they were going to leave Atlanta with a loss unless something changed quickly.

Fortunately the Tech defense came up with another big play. Georgia Tech’s Marcus Allen fumbled the football, and Dadi Nicolas came up with the recovery at the Yellow Jacket 18 yard line. This time the VT offense was finally able to come through. After a critical (and obvious) pass interference call on third and seven, Travon McMillian rumbled into the end zone from four yards out to give Tech a 23-21 lead with 6:58 left in the game.

The adventure wasn’t over however, as the snap on the ensuing extra point hit the ground, and Joey Slye missed the kick. Georgia Tech was still a field goal away from winning the game.

However, the Virginia Tech defense held on for two more drives. On the final drive of the game, Georgia Tech penetrated to the Virginia Tech 39-yard line, but was called for an unsportsmanlike conduct penalty that turned a third and five into a third and 20. Justin Thomas was then sacked by Ken Ekanem, and the final fourth and 27 prayer fell incomplete.

It was a dramatic and gutsy come-from-behind win, though the Hokies will be the first to tell you that they could have won the game by a more comfortable margin, had they operated a little more smoothly.

Virginia Tech will face North Carolina in Frank Beamer’s final home game on Saturday, November 21. The game will kick off at noon in Lane Stadium. It will be televised on one of the ESPN networks, but which one is currently TBD.