Georgia Tech is 3-6 on the season, and they are 1-5 in ACC play. The Yellow Jackets have shocked people with their poor record this year, considering they were picked to win the Coastal Division back in July.

However, the Yellow Jackets have lost some very close games.

All four of those games were very winnable, but Georgia Tech couldn’t win them. Why? Inexperience, injuries, and a lack of depth and talent at key positions are the main reasons. Sounds familiar, doesn’t it?

The Hokies have to win two of their final three games to qualify for a bowl. The Jackets have to win out, which will be an extremely tough task against Virginia Tech, Miami and Georgia. We should see two teams with a lot to play for on Thursday night.

Youth an Issue for the Yellow Jackets

If you think Virginia Tech is a young football team, you haven’t seen Georgia Tech yet. They start a ton of freshmen, and have many more in the two deep.

There are also 11 sophomores in the two deep. The youth is especially apparent on the offensive side of the ball where the Yellow Jackets start a total of five freshmen, and have numerous other freshmen backing up. Inexperience is a big reason for Georgia Tech’s 3-6 record, perhaps the biggest reason of all.

Here’s a quick statistical comparison between the GT offense and the VT defense. First, the Yellow Jacket offense…

And now the Hokie defense…

On paper, this is an even matchup. However, Virginia Tech’s tendency to give up the big play is very concerning when facing this type of offense.

Here’s a key stat to keep your eye on…

Last year Georgia Tech was #1 in the country in this category. The Yellow Jackets have been uncharacteristically terrible on third downs this year because they’ve faced more long yardage situations than normal. The Hokies need to win this battle.

Injuries Have Taken a Bite Out of the Georgia Tech Offense

Here’s a look at Georgia Tech’s injury report, per this site that tracks all college football injuries/suspensions.

Those are some significant injuries, particularly at A-Back and B-Back. Snoddy is the most experienced A-Back on the team, and the Jackets have really missed him. Without him in the lineup, three of their top four A-Backs have been true freshmen or r-freshmen. Overall, it’s hard to be effective on offense with so many of your top playmakers out.

Michael Summers is GT’s second leading receiver, but he told Paul Johnson earlier this week that he was quitting the team. It’s rare that you see a player quit during the middle of the season if he’s getting a lot of playing time. It almost makes you wonder whether or not there are some chemistry issues on this team.

Quarterback Justin Thomas was a great player in 2014. Lacking the support around him in 2015, his numbers haven’t been as good.

The Yellow Jackets haven’t been able to throw the football effectively, as the numbers show. If you’re wondering what RAW QBR and ADJ QBR mean, read this link.

On the ground, his yards per carry have also dramatically decreased…

Thomas clearly isn’t the same player he was a year ago. Some of that is his fault, but he’s had to adjust to different players. His A-Backs and B-Backs are different (and not as good) this year, and he doesn’t have DeAndre Smelter (4th round pick) at wide receiver. Thomas is the man this year, and opposing defenses know that he’s the guy to stop if you want to beat Georgia Tech.

Virginia Tech’s offense needs to come out strong and score some points. They need to get the Yellow Jackets behind and force them to throw the football. Here’s how the units match up, starting with the VT offense…

And now, the GT defense…

That’s a pretty even matchup on paper, but with Michael Brewer being back and Travon McMillian getting the ball more, as well as key injuries and suspensions to Georgia Tech’s defensive line, I think things are trending in favor of the Hokies.

Injuries and Suspensions Also Taking Their Toll on GT’s Defense

Georgia Tech doesn’t have great depth at defensive tackle, thus they typically use a three-man rotation. However, two of those top three defensive tackles will miss Thursday night’s game. Jabari Hunt will be serving the second game of a two-game suspension. However, the big loss is Adam Gotsis (6-5, 282, Sr.), who is the best overall defensive player on this Yellow Jacket team.

In fact, Georgia Tech’s defensive tackle depth is so thin that they list only three different players.

NT: Kyle Cerge-Henderson (6-1, 290, Fr.). Henderson has played in just three games as a true freshman, yet he’ll be starting against the Hokies on Thursday night.

Backup: Francis Kallon (6-5, 284, r-Jr.): Kallon has played in five of Georgia Tech’s nine games. He’ll have to be the #1 backup at both tackle spots on Thursday night.

Georgia Tech is #92 nationally in run defense efficiency. On paper they will be even worse than that with the loss of Gotsis and Hunt.

These days, a regular defensive formation features five defensive backs to counter spread offenses. When a team lines up in a running formation that features a fullback and a tight end, or two tight ends, then defenses will counter by taking out a defensive back and inserting a linebacker.

For Georgia Tech, their nickel back is Lawrence Austin (5-9, 185, So.). The linebacker who replaces him against power formations is Brant Mitchell (6-2, 235, Fr.). Austin isn’t a particularly experienced player, but Mitchell is a true freshman. When he’s in the game, he’ll be one of two true freshmen in Georgia Tech’s front seven behind nose tackle Kyle Cerge-Henderson.

Georgia Tech’s defense is very questionable no matter what formation they are in, but power formations will make them even more inexperienced. It will be interesting to see what kind of formations Travon McMillians runs out of on Thursday night.

Those guys represent one of the most experienced units in the conference.

When you compare the experience and ability of the secondary to the inexperience and lack of ability in the front seven, it seems fairly obvious that Virginia Tech should come into this contest with a game plan to run the football. Travon McMillian has had a total of 62 carries over his last two games. He can expect to carry another heavy work load on Thursday night.

This is without a doubt the worst team of the Paul Johnson era at Georgia Tech. There’s a very real possibility that the Yellow Jackets will finish 3-9 this year, though they’ll probably find a way to win one of their last three to finish 4-8. Compare that to Johnson’s other teams in Atlanta…

Personally, I think it’s time for Georgia Tech to end the Paul Johnson era. He got off to a hot start in 2008 and 2009 with Chan Gailey’s players, but the rest of his tenure has been extremely mediocre with the exception of 2014. Whether the Jackets make a change this year or sometime in the future, the reality is the next head coach has a huge rebuilding job ahead of him. He’ll inherit a quarterback who isn’t a real quarterback, and he’ll inherit an offensive line that hasn’t been taught regular run blocking technique, much less pass blocking technique.

But, that’s getting away from the topic at hand. I like Virginia Tech in this game, and I’ve got three reasons why.

1: The return of Michael Brewer and the emergence of Travon McMillian coincide with the Yellow Jackets losing two of their top three defensive tackles. Advantage Hokies.

2: This will be Virginia Tech’s first game since Frank Beamer announced his retirements. If the Hokies can bottle up those emotions and use them correctly, they’ll have an advantage on Thursday night.

3: Lack of playmakers for Georgia Tech. I’m not a big fan of the performance of Virginia Tech’s linebackers this season, but the Yellow Jackets aren’t exactly setting the world on fire offensively.

Win or lose, I’m just happy to be playing a football game again. It’s been a long 10 days since Frank Beamer’s retirement was announced. It’s time to get back on the field.

Will Stewart’s Take: This is one of those games that was marked down as a strong possibility for a loss in the preseason. Ohio State was viewed as the toughest game of course, followed by road games against GT, Miami, and BC. If your preseason prediction was 10-2 or 9-3 for the Hokies, you probably had them losing this one.

That’s kind of hard to believe, given how things have unfolded for the Jackets this year. They were picked to win the Coastal, and they’re …. really not good. 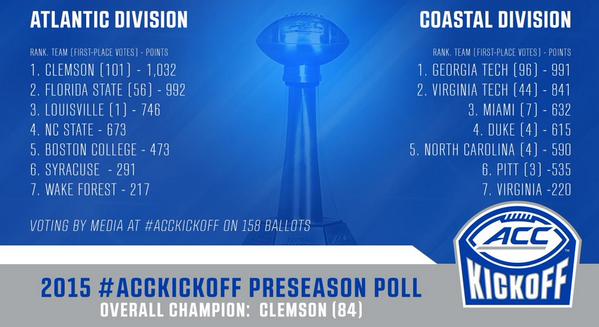 And here are the current ACC standings: 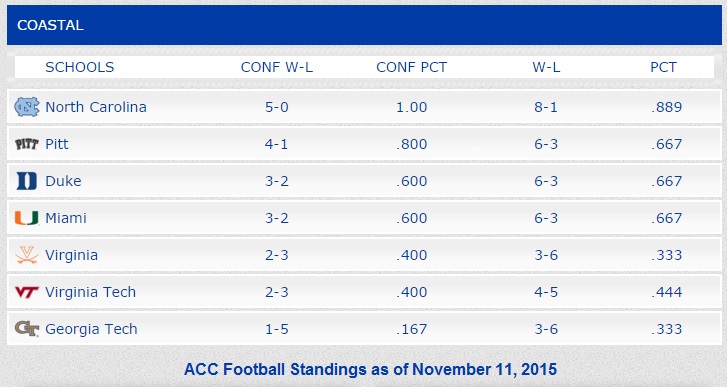 So GT isn’t the only team that has fallen on its preseason face, and as Chris pointed out, the reasons are very similar.

I’m picking VT to win this one, but not because I think the Hokies will shut down Georgia Tech’s offense. The Hokies’ middle linebacker position has struggled too much against the running game for me to go there. Virginia Tech might have good success against the Jackets’ spread option; they might not.

But I really like the matchup between Virginia Tech’s offense and Georgia Tech’s defense, even if Scot Loeffler doesn’t go primarily with the running game. That would actually be out of character for Loeffler, who typically asks his quarterbacks to do a lot and contribute a lot, not just to hand off a bunch of times.

I think the Hokies are a much better team offensively, now that Michael Brewer is back and fully in rhythm. It will surprise me if the Hokies can’t move the football on Georgia Tech, whether Loeffler chooses to go via air, land, or both.

You might expect me to throw in the intangibles and say, “The players and coaches are really going to rally around Frank, now that they know he’s retiring!” But I could just as easily say, “The Virginia Tech assistant coaches probably aren’t very focused, now that there’s no guarantee they’re going to have a job next season!” So there’s no saying which way the intangibles are going to go.

As for my prediction? Pfffftt. Like I’m going to pick against Frank in his last few games.