It’s safe to say that we were all hoping for a later start for Frank Beamer’s last home game against UNC. However, a noon kickoff on either ESPN or ABC could provide more national exposure for Tech’s legendary coach than a 3:30 start time.

ESPN has to pay out out millions of dollars to the ACC, SEC, Big Ten, etc. each season. It stands to reason that they are going to do their research and attempt to place games in the best timeslots for TV ratings, which of course will maximize their advertising revenue. If that means Frank Beamer’s final home game is going to be at noon, then it’s going to be at noon.  Emotions play no factor into the decision making process.

Of course, that’s exactly what was announced earlier today. The Hokies and Tar Heels will kick off at noon on ESPN, ESPN2, ESPNU or ABC. The network will be announced after this weekend’s games. From a ratings and exposure standpoint, ESPN or ABC would be best.

Total viewers for the season, noon games, for each ESPN/ABC network…

If you’re going to play a game at noon, you’re much better off being on ESPN or ABC, otherwise your exposure decreases dramatically.

3:30 is a great start time, but from a TV perspective, ESPN is competing with the 3:30 SEC game on CBS, and sometimes a mid-afternoon Notre Dame kickoff on NBC. Therefore, the 3:30 ESPN/ABC ratings drop, and ABC and ESPN2 often do reverse mirror broadcasts during that timeslot. For example, if Tech played regionally on ABC at 3:30, the game could be viewed on ESPN2 outside of the ACC region.

Here are the total viewers for 3:30 games…

The numbers for ESPN and ESPN2 drop quite a bit from the noon time slots. The ABC numbers dramatically increase, but remember that ABC is showing TWO games during that 3:30 time slot. For example, on September 26, the 3:30 ABC timeslot was the second highest-viewed timeslot of the day, drawing 3.721 million viewers. However, part of those 3.721 million were watching Ohio State-Western Michigan, while the other part was watching Virginia Tech lose to East Carolina. Florida-Tennessee, on CBS at 3:30, was #1 for the day at 4.641 million viewers.

The ESPNU numbers are pretty similar for both timeslots. As a sidenote, Tech’s game with Duke was the most-viewed 3:30 ESPNU game of the season thus far with 722,000 viewers. #2 was VT at Purdue, with 522,000 viewers.

Personally, I was hoping for a 3:30 reverse mirror broadcast on ABC/ESPN2. However, don’t consider it a slight if the Hokies get put on ESPN or ABC at noon. If that’s what happens, viewership will be very high, and Tech and Frank Beamer will get a lot more positive exposure than they would later in the day on a smaller network. If they get stuck on ESPNU though…yikes.

Bottom line: pull for the Hokies to beat Georgia Tech (duh) and for UNC to defeat Miami. Both of those outcomes will increase the likelihood of an ESPN or ABC broadcast. If we’re going to play a noon game, we at least might as well have some people watching on TV!

A night game was never a real possibility, for what it’s worth, and College GameDay probably isn’t either, despite the Twitter campaign.

Mike Barber of the Richmond Times-Dispatch had an interesting Tweet earlier this afternoon.

#Hokies basketball has sold 4 times as many 5-game mini-plans for this year as last and has more than doubled student season ticket sales.

That’s a good sign as far as ticket sales go. Mini-plans cost $140, so that should increase revenue a decent amount. Student season tickets are cheap, but hey, every little bit helps, right?

It’s not clear exactly how many season tickets have been sold, but my guess is they are on pace to match or exceed last year’s orders. At this point Whit Babcock’s marketing campaigns are in full effect. There are still season tickets available in the non-gray areas in the picture below. 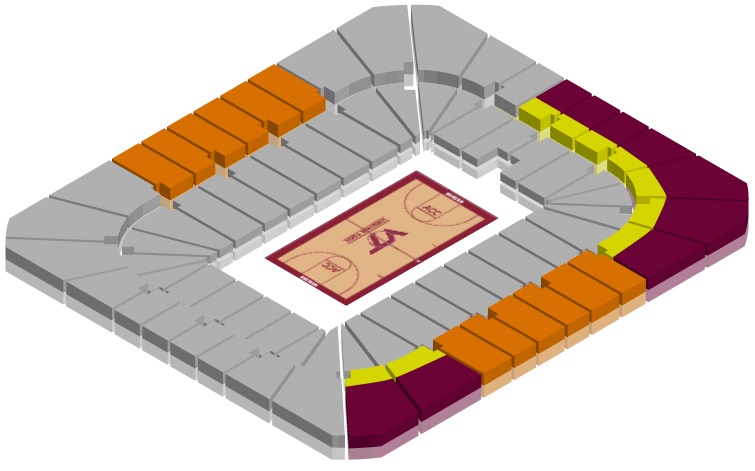 Remember also that Virginia Tech has moved the media behind the basket this year (alas, there go my wonderful courtside seats) and they are selling luxury courtside tables. Tables cost $20,000 each, and there are 14 available. The last we heard, all but two tables have been sold, so that’s also an extra $240,000 in revenue.

There’s more good news. In a few months, Virginia Tech will no longer be on the hook for Seth Greenberg’s contract, and in about 1.5 years they’ll get to stop paying James Johnson as well. Here is what both guys are paid now:

Those numbers were provided by David Teel in this article.

Getting Greenberg off the books will provide an extra $300,000 per year beginning in April. Once Johnson’s payments are finished the next year, the Hokies will be in even better shape.