What do you say about a man about whom everything has already been said?

As Chris Coleman wrote earlier Sunday, you’re going to hear a lot about the numbers Frank Beamer compiled in his time as head coach at Virginia Tech. Here’s an example, released on the @VT_Football Twitter account, the official Twitter account of Virginia Tech football: 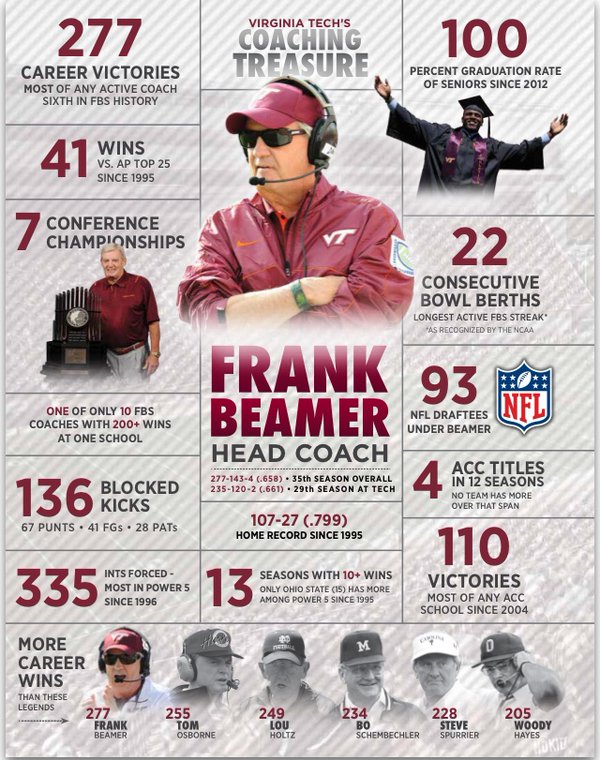 I gotta be honest; my eyes blur when I look at stuff like that. I don’t really pay attention to it. It’s like trying to count Bill Gates’ money; there’s just … so much of it. At some point, you just nod and say, “Yeah, that guy has done a lot.”

What Frank did as Virginia Tech’s head coach — and for three or four more games, he’s still working on those numbers — at some point becomes less important than the answers to two questions: (1) What is he leaving behind; and more importantly, (2) How did he affect people while he was here?

We know what he’s leaving behind, in the physical sense: a 65,000+ seat stadium with luxury boxes and an academic support center, a multi-million dollar football center (the Merryman Center), an enormous indoor practice facility, a plush locker room, and more. Jim Weaver got credit for building those things, but of course, he was piggybacking on what Frank Beamer achieved. That’s not unfair, that’s the truth.

In the non-physical sense, Frank leaves behind a lot more: a sense of accomplishment, and of pride, and of worth among Hokie Nation. I’ve said this before: when I was a student at Virginia Tech from 1983-87, the football program didn’t have much of a history, but I always felt that it was capable of great things. Like many of you, I was fiercely proud of this university, not just its football program, and I always felt that it could, and should, accomplish more.

Frank was the first coach to do that, the first to accomplish what many of us thought and hoped the program could do: win multiple conference championships, become a perennial top 20 team, and even bang its head against the lofty ceiling of a national championship. I thought when I was younger that we could do it; Frank actually went out and did it.

In piling up those numbers, however, he leaves behind much more. He leaves behind a sense of confidence that not only can it be done again, but it should be done. This is one of the best programs in the ACC, and Frank made it so.

That feeling is in stark contrast to the feeling I had that day in late 1990, when the formation of the Big East Football Conference was announced, and I saw the press photo of the Virginia Tech helmet lined up on the table with all those helmets from more storied football programs: Miami, Boston College, Syracuse, West Virginia, and Pittsburgh. I remember feeling like a stowaway, like we’d snuck onto a grand ship just before it pulled out of the harbor. And I saw a lot of losses in Virginia Tech’s future.

Frank Beamer and his Hokies did away with that mindset. Frank barged out of the cargo hold, took the wheel, and instead of hiding like a stowaway (I’m looking at you, Temple), he took the wheel and took charge. And he won a lot of games. By the time the Hokies left the Big East in 2004 for the ACC, Virginia Tech was well-established as a program, and winning wasn’t a surprise anymore. It was expected.

One of the greatest measures I’ve ever heard of a person is the statement: “People may not always remember what you said or what you did. What they remember is how you made them feel.” It used to be the signature line on emails sent by my friend F4EHokie, and when my mother passed away unexpectedly in 2008 from lung cancer, it was a line I used in her eulogy, a eulogy I delivered on December 6th, 2008, as Frank Beamer’s Hokies were winning the ACC Championship Game against Boston College.

So ask yourself that question: How did Frank Beamer make you feel?

It’s a fantastic question, because you can answer it on two levels: collectively and individually.

Collectively, the answer is easy. He made us feel like winners, and he made us feel proud. Sure, he had his missteps along the way, and often, those missteps made us feel, well … not proud. Not many of us were proud during that long string of arrests in the football program in the mid-90s, and we weren’t proud of the unending lowlights of the Marcus Vick era. But in a 29-year career, you’re going to make some mistakes and err at times, and the truth is that the moments that made us proud far outweighed the moments that made us feel otherwise. Taking the 50,000-foot view of things, Frank built something you can be extremely proud of.

I was struck by a recent article about Duke safety Jeremy Cash, one hell of a football a player and a good young man to boot, and what he had to say about Urban Meyer and the Ohio State football program. Cash started his football career at OSU, and when Jim Tressel was fired and Meyer took over, Cash transferred out, to Duke.

“I went there because I believed in everything Coach Tressel stood for, and once he was gone, they didn’t share those principles outside of football, about life after football,” Cash said. “(Meyer) and I just definitely didn’t see eye to eye. Essentially, that turned into what is metaphorically just a factory. Churning players in and out, in and out, in and out, and once you’re done playing football, that’s all they want to do with you. What have you done for me lately? As long as you’re doing something for them, they’re going to do something for you. The moment you can’t do anything else for them, at least from my experience, they’re kind of done with you.” (Source: USA Today)

Jeremy Cash sure remembers how Urban Meyer made him feel.

Here in Radford, Virginia, where I live, former Radford High School football coach Norman Lineburg is a local legend on par with Frank Beamer. Like Frank, Norman is modest, self-deprecating, and kind. Like Frank, Norman won a ton of games, over 300, before retiring. He and Frank coached together at Radford High School back in the late 60s/early 70s, before Norman received the head coaching job and Frank moved on.

I asked Norman Lineburg one time what it was like to accomplish so much in a community like Radford, and in effect, to be a living legend in a small town. For just a moment, his face darkened, just a bit, and he said, “Oh, not everyone feels that way. There are still people in this town who turn the other way when they see me, because they didn’t think I was fair to their son, or because I didn’t play their son when they thought he should have played.”

It’s the nature of the business. When you touch thousands of lives, no matter how hard you try, you’re not going to touch some of them in exactly the right way. If you looked long enough and hard enough, you might find someone who doesn’t have great things to say about Frank, but you’d have to look very long and very hard.

Which makes it all the more remarkable, the outpouring of respect and affection for Frank now that his retirement is official. I won’t resort to the lazy journalism of embedding tweets in this article (though sometimes I do), but rest assured that many people from outside the program have gone public on Twitter with positive things to say about Frank and what he did at Virginia Tech, but more importantly, the class with which he did it.

As for how Frank made people feel individually, I imagine he touched a lot of lives in small, direct ways. It’s embodied in this quote from “Let Me Be Frank” — again, the image is from the Virginia Tech Football Twitter account. 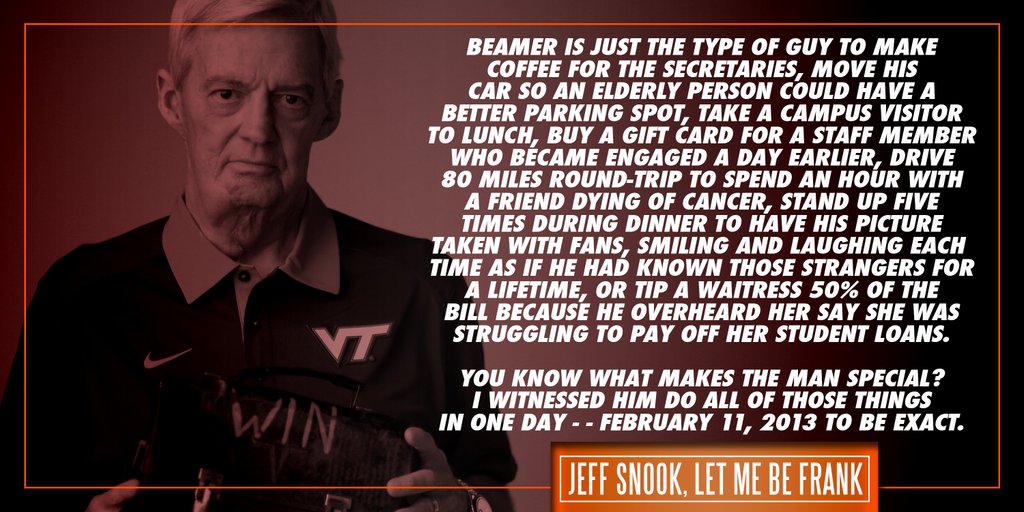 How many of us owe how much to Frank Beamer, and how can we count it? We can’t. For 20 years now, I’ve been covering Frank Beamer’s Hokies for this web site, and without his success, I would not be doing this, period. He changed my life, not directly, but it’s undeniable that he did change it. Like Jim Weaver, I built something, but like Jim Weaver, I was only able to build it because of what Frank did first.

There are thousands of us, thousands of you, who can say the same. The man accomplished a lot as Virginia Tech’s head coach, but what’s even more impressive is what he’s leaving behind, as a physical and cultural legacy. We should all be so lucky, and so accomplished, but very few of us are.

When the end came, Frank Beamer even stuck the landing. He knew the exact right time to step down, and he knew the exact right reasons to do so. Best of all, he timed it now, giving Hokie fans a chance to pay their proper respects at his last game in Lane Stadium on November 21st, 2015, against North Carolina.

I don’t want to “honor” Frank Beamer during a timeout at some random football game next season. I want a four-hour goodbye party in the place where we spent so much time with him.

It’s against his nature. He doesn’t seek publicity or attention, and I think he probably would have preferred a quiet exit out the back. He could have had that with a postseason announcement, but instead, he announced early, because he probably knows that a proper goodbye is what all Hokie fans want, and this gives them a chance. He never would have done this for himself, but he knows that we want to do it for him, and he’s giving us the chance.

One last chance to revel in what he makes us feel. Well done. I wouldn’t expect anything less.