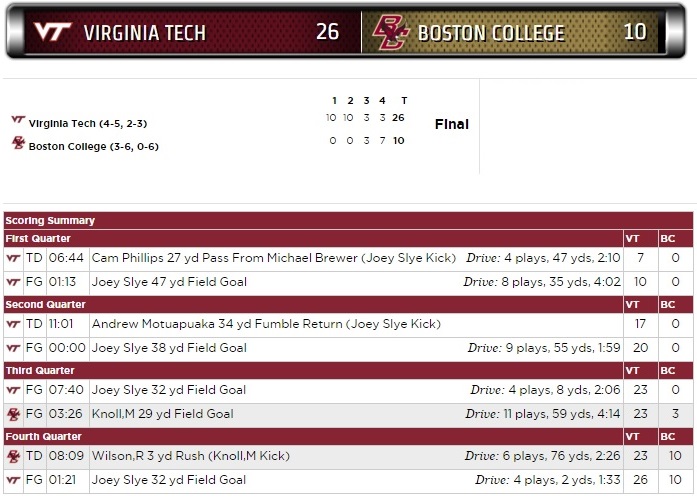 Virginia Tech rode a strong defense, as well as an anemic Boston College offense, to a 26-10 victory in Chestnut Hill on Saturday afternoon. The Hokies improved to 4-5 overall and 2-3 in the ACC, increasing their odds of extending their bowl streak to 23 seasons. The Eagles fell to 3-6 overall and 0-6 in conference play.

Boston College started r-freshman quarterback Troy Flutie, but made a switch early in the game to true freshman walkon John Fadule because of his increased mobility. Fadule played tough, running for 53 yards on 18 carries and going 8-of-20 for 143 yards and an interception, but in the end the Eagle offense was simply too limited. They gained just 218 yards on the day.

Virginia Tech’s offense gained 235 yards…in the first half. The Hokies played extremely well against the vaunted Boston College defense over the first 30 minutes of play. However, with a 20-0 lead at halftime, Tech turtled up over the final 30 minutes as Frank Beamer chose to run the football to get the game over with as quickly as possible. The Hokies ended up with only 275 yards for the entire game.

Travon McMillian was once again the workhorse. After a 29 carry, 142 yard performance against Duke, Tech handed their r-freshman tailback the ball 33 times against Boston College. He averaged just 3.2 yards per carry against a very tough defensive front, but he gained 105 yards and helped burn valuable time off the clock.

Michael Brewer started his second consecutive game, going 15-of-21 for 180 yards with a touchdown and an interception. He hit Cam Phillips for a 30 yard touchdown on Tech’s second drive of the game, but was limited in the second half because of the staff’s decision to burn clock. Brewer also caught a pass from Isaiah Ford for 14 yards.

Defensive end Dadi Nicolas finally broke through against the Boston College offense. He registered 3.5 tackles for loss and a sack. Coming into the game, he had just one tackle for loss and no sacks on the season.

Greg Stroman was forced into action on defense because of a shoulder injury to true freshman Adonis Alexander. His interception in the end zone sealed the game with 38 seconds remaining.

Strong field position helped the Hokies take an early lead. Tech got the ball first, and Michael Brewer promptly hit Bucky Hodges for a 24 yard gain on the first play from scrimmage. A nine yard pass to Sam Rogers two plays later gave the VT offense another first down at the BC 40 yard line.

The drive stalled when Brewer was sacked on second and eight from the Boston College 28, but the ensuing AJ Hughes punt pinned the Eagle offense at their own 10. BC lost two yards on the drive before punting the ball away to Tech, and the Hokies started their next drive from the BC 47.

After a three yard jet sweep to Greg Stroman and a 14 yard pass to Isaiah Ford, Michael Brewer hit Cam Phillips on a 30 yard touchdown pass down the right sideline to give his team a 7-0 lead with 6:44 remaining in the first quarter.

After another three and out by Boston College, the Tech offense took over again on its own 36. Brewer started the drive with a 13 yard pass to Isaiah Ford, and the Hokies picked up a pass interference call two plays later. Three Travon McMillian runs for a total of 14 yards got Tech to the BC 30, but again the drive stalled two plays later. Tech settled for a 47 yard field goal from Joey Slye, making the score 10-0 with 1:13 left in the first quarter.

Then there was a strange sequence that put the game away for the Hokies. The Hokies lined up to punt from their own 48, and Hughes got off a great punt inside the Eagle 10. However, the punt slightly hit a BC player, and Donovan Riley recovered it at the five yard line. Easy touchdown, right?

Not so fast. Tech called a fade to Bucky Hodges on the first play, but Michael Brewer’s pass was underthrown and intercepted in the corner of the end zone. The Eagles dodged a bullet…for the time being. On the second play of their next drive, Andrew Motuapuaka filled his gap between the tackles, stopped BC running back Jordan Gowins in his tracks, stripped him of the football, and ran it back 34 yards for a touchdown. Just like that it was 17-0 Hokies with 11:01 left in the half. From that time on, every point the Hokies scored was just gravy.

The teams slugged it out for the remainder of the second quarter before a BC mistake gave the Hokies another scoring opportunity. Tech was content to run out the clock with 1:59 left in the half, and after three running plays they lined up to punt. AJ Hughes got the punt away, but he was knocked to the deck. Officials called a roughing the punter penalty on Boston College, giving Tech a free first down at their own 32.

The Hokies decided to go for the score. Michael Brewer completed three consecutive passes – 25 yards to Isaiah Ford, 16 yards to Cam Phillips and eight yards to Phillips – to set up a Joey Slye 38 yard field goal as time expired in the first half. The Hokies took a 20-0 lead into halftime.

Boston College has not scored more than 17 points against an FBS team all season, so the odds were very much in Virginia Tech’s favor. Frank Beamer sat on the football for the second half. In fact, Tech’s first four drives of the second half were typical of a team that was trying to run out the clock. The Hokies ran the ball on on first and second down on all four drives, and only threw it when they faced a third down situation.

The Hokies managed to tack on two more field goals in the second half, while the Eagles finally cracked the scoreboard on two occasions. However, with the way the BC offense had played all year, and considering the fact that they were playing a walkon true freshman at quarterback, the game was never in doubt.

Virginia Tech will take next week off, and then travel to Georgia Tech to face the Yellow Jackets on Thursday, November 12. Kickoff is scheduled for 7:30pm, and the game will be televised by ESPN.