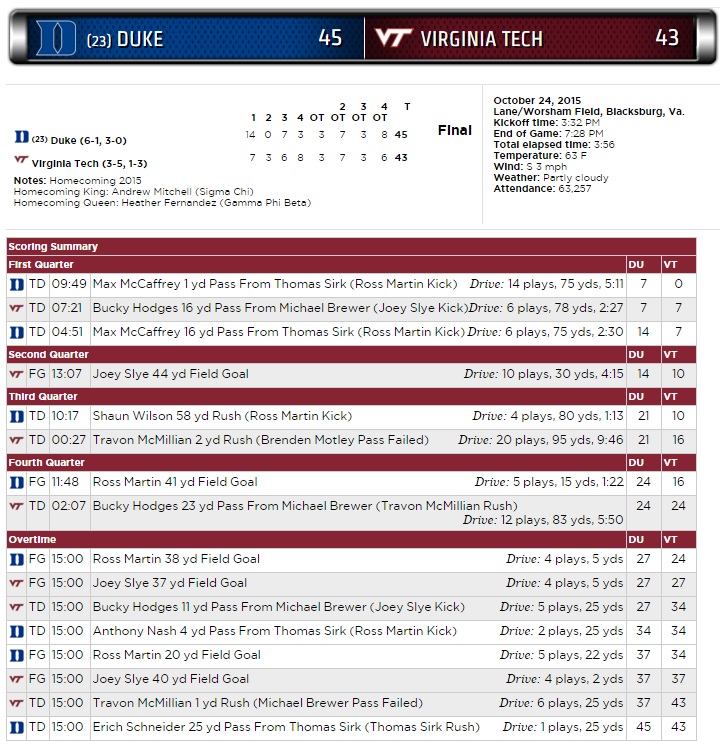 Blacksburg, VA — In a game loaded with intrigue, Duke quarterback Thomas Sirk scored on a two-point conversion at the end of the fourth overtime to lead 23rd-ranked Duke over Virginia Tech, 45-43.

In a contest full of great plays, drama, and gaffes, the Hokies wound up on the short end of the stick. Michael Brewer returned and played almost the entire game, though Brenden Motley was inserted at times. It was a solid outing by Brewer, who was 24-45 for 270 yards and 3 TDs, with no interceptions.

Tech tight end Bucky Hodges caught three TD passes, all from Brewer, and tailback Travon McMillian ran 29 times (24 after half time) for a career-high 142 yards and two touchdowns. The Hokies also didn’t turn the ball over, and they had 452 total yards against Duke’s #4-ranked defense in the nation, which had been giving up just 252.8 yards per game.

So how did Tech lose? It’s a question the Hokies will be asking themselves for a while. But it boils down to a simple fact: Virginia Tech is not doing enough of the things it takes to win football games, sometimes even when they have significant statistical advantages like they did in this game.

Duke also didn’t turn the ball over, the second straight game the Hokies haven’t forced a turnover, after once being ranked #11 in the nation in turnover margin.

It came down to Virginia Tech failing to make a 2-point conversion in the first possession of the fourth overtime, whereas Duke quarterback Thomas Sirk ran it in when he had a chance, juking Tech’s Andrew Motuapuaka in the backfield and running over Luther Maddy at the goal line in the process.

Duke made the plays to win. Virginia Tech didn’t.

Along the way were many twists and turns, which we’ll go over in the game recap below. Among other things:

The only way to get it all documented is to simply recap it, in chronological order.

Duke marched downfield to open the game with a methodical 14-play, 75 yard drive that ended with a  1-yard TD pass from Thomas Sirk to Max McCaffrey. On the drive, Duke was 4-4 on 3rd down conversions.

Michael Brewer responded, completing three passes to his tight ends on the ensuing drive, including a 36-yard pass to Bucky Hodges, and a 16-yarder to Hodges for the tying touchdown.

That score stood for a while, until early in the second quarter when the Hokies drove downfield and had 1st and ten at the Duke 19. The Hokies tried a wide receiver screen to Isaiah Ford (career-high 9 catches, 67 yards), but the screen was blown up and Ford lost 12 yards on the play. Tech settled for a 44-yard Joey Slye field goal to make it 14-10 early in the 2nd quarter.

Neither team threatened for the rest of the second quarter, with the exception of Duke driving to the Hokie 11, only to have kicker Ross Martin miss a 28-yard field goal from there. The score remained at 14-10 at half time.

The Hokies dominated the third quarter everywhere but the scoreboard. Tech ran 29 plays to just six for Duke, and the Hokies held the ball for 13:20 to Duke’s 1:40. But VT only outgained Duke 146-80, and Duke outscored the Hokies 7-6 on the strength of a 58-yard TD run by Shaun Wilson that capped a 4-play, 80-yard TD drive.

The Hokies started the third quarter with a 9-play, 36-yard drive that led to a punt. Wilson’s 58-yard TD run put Duke up 21-10 four plays later.

“The safety lined up on the wrong side,” explained defensive coordinator Bud Foster, who chewed out Adonis Alexander after the play. “Those are the things right now, that as a coach, you’re tearing your hair out, very simple things that we rep. And we repped that play 25 times.”

Tech’s Der’Woun Greene brought the ensuing kickoff out of the end zone but was crushed at the five yard line. Facing 95 yards of turf in front of them, the Hokies went on a 20-play drive that consumed 9:46 from the clock and featured 5-of-5 on 3rd down conversions. At the end of the drive, Travon McMillian ran it up the gut on 3rd and goal from the two yard line for the touchdown.

The 20 plays were the second-most plays in a drive for the Hokies under Frank Beamer, and the 9:46 set a record for time of possession on a single drive. That made it 21-16 with 27 seconds left in the third quarter, and Frank Beamer decided to go for two points. The Hokies brought in Brenden Motley, whose arm was hit on a pass attempt, and the ball fell to the ground.

On the Hokies ensuing kickoff, Tech kicked an onsides kick that Duke recovered at their own 49-yard line. It was an odd decision, but Frank Beamer said after the game that it wasn’t intended to be an onsides kick, but a squib kick.

“That was supposed to be a knuckleball dribbler down to the 20-yard line,” Beamer explained. “We practiced it all week, and we didn’t execute it. That wasn’t an onside kick at all. What I was hoping is that we would get a cheap fumble. You get the knuckleball rolling down there, you get guys that aren’t used to handling the ball and maybe get to fumbling it around, and we get the ball around the 25 or 26. But when it takes a high hop and the front line gets it, that’s not very good execution.”

To make things worse, the Hokies were flagged for an illegal formation, and Duke took over on the Virginia Tech 46-yard line.

The failed kick shifted the field position battle drastically and eventually led to a Duke field goal. After a three-and-out, the Blue Devils pinned the Hokies at their 13-yard line with a punt, then sacked Brewer to force the Hokies into a long fourth down from their own four yard line. A 35-yard punt by A.J. Hughes put Duke in business at the VT 35 yard line. From there, the Blue Devils moved just 15 yards and got a 41-yard field goal to go up 24-16 with 11:48 to go.

The two teams then traded punts, and with 7:57 left, the Hokies took over on their own 17 yard line. They mounted their second monster drive of the game from there, going all 83 yards in 12 plays. Isaiah Ford caught three passes for 30 yards in the drive, which ended with one of the plays of the game, a 23-yard Brewer bomb to Bucky Hodges that Hodges reeled in, despite being interfered with.

On the play, Brewer was rushed by an untouched blitzer, but he stood in the pocket, delivered the ball, and took the hit.

“They do a lot of very good things schematically on defense,” Brewer said. “One of the things they do at critical points in the game is to bring what we call 11-up heat, where they’re bringing in at least one more than we have to protect. I knew I was going to have a free hitter coming at me, and I tried to buy myself just enough time. Bucky made a great play.”

That made it 24-22 with 2:07 left, and the Hokies went for two. This led to a bizarre sequence where Duke committed two more pass interference penalties on subsequent plays. On Tech’s third try from the one yard line, Travon McMillian roared up the middle behind Wyatt Teller to tie the game.

Duke, on the strength of a 39-yard pass to McCaffrey, threatened for the win with 1:09 left. On 4th and three from the Hokie 28, Ross Martin missed again, doinking a 46-yard field goal attempt off the right upright to keep the game knotted at 24.

The ball was spotted on the VT 29, and the Hokies took over from there with 1:04 remaining and a timeout left. After a 16-yard run by McMillian out to the VT 45, the Hokies lined up and were ready to snap with about 41 seconds left. But the players received the signal from the sideline and looked over there for the next play, which ate up valuable seconds.

The Hokies snapped the ball with just over 30 seconds left. Brewer threw a sideline pattern to Cam Phillips, who was knocked out on the 50 with about 27 seconds left. The Hokie coaching staff assumed that the clock would stop, but the referees ruled that Phillips’ forward progress was stopped inbounds, and the clock kept running.

Tech didn’t call their remaining timeout, and didn’t snap the ball until there were eight seconds left on the clock. Brewer threw incomplete to Ford with two seconds left.

The Hokies took their last timeout at that point, and with the ball on the 50 yard line, Frank Beamer opted to have Joey Slye try a 67-yard field goal, two yards short of the NCAA record for the longest field goal. Slye missed the kick well short as time expired, sending the game into overtime.

Virginia Tech went first and scored on an 11-yard TD pass from Brewer to Hodges to go up 34-27. Deon Clarke committed pass interference on the first play of Duke’s possession, and the Blue Devils tied it up two plays later on a 4-yard TD pass to Anthony Nash, 34-34.

Duke opened with a 21-yard pass to McCaffrey that gave them 1st and goal at the four yard line. The Hokie defense stiffened, forcing a 20-yard field goal attempt that Martin nailed. VT went three and out, and Slye hit a 40-yard field goal to tie it at 37.

The Hokies went first and drove methodically to the one, where McMillian scored on a one-yard run up the middle. NCAA rules mandate that from the third overtime on, teams must go for the two-point conversion. The Hokies tried a pass play, and Brewer’s attempt to Ford was broken up.

Duke scored a touchdown on the next play. Duke tight end Erich Schneider, lined up wide, blew past Chuck Clark’s man coverage and hauled in a 25-yard strike from Sirk to tie it at 43.

“We were bringing just a five-man rush on that,” Bud Foster explained. “That play right there was really disappointing, because we weren’t in position to contest the ball.”

On the next play, Sirk ran a QB draw to the right. Andrew Motuapuaka had a shot at him in the backfield but whiffed. Sirk ran to the goal line, where he collided with Tech’s Luther Maddy and fell into the end zone for the 45-43 victory.

With the loss, the Hokies fall to 3-5 overall, 1-3 in the ACC, while Duke improves to 6-1 (3-0). Tech’s streak of 22 straight bowl games is in jeopardy, and an ACC Coastal Division title is out of the question.

Bud Foster was philosophical about the loss afterwards. “We’ve had a lot of these games over the years, a lot of tight-nosed football games that are pretty stressful, and this was one of them. It’s unfortunate. Our kids played hard. And our fans, we appreciate you guys. We’re going to keep fighting.”

Frank Beamer talked about the need to bounce back from the loss. “We’ve got some big ball games against rival opponents. Coming back from disappointment and showing a little character and being relentless, those things go a long way in life. If you give in, I pretty much know how the story’s going to turn out.”