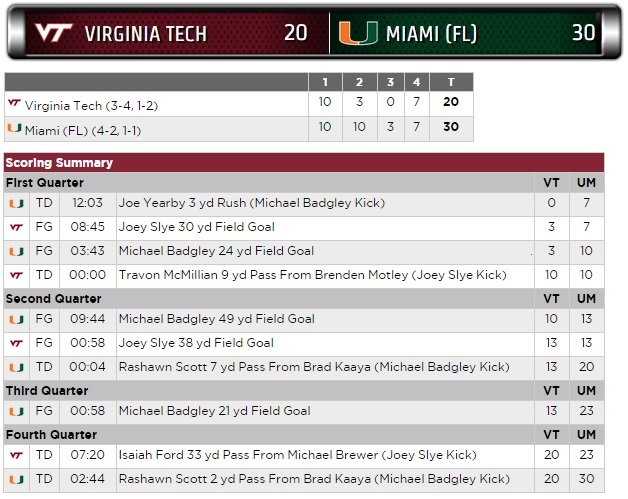 Virginia Tech and Miami fought an even battle in nearly every statistic but one: turnovers. The Hokies turned it over four times and the Canes zero, and Miami downed Virginia Tech 30-20 in Miami Gardens.

Brenden Motley started at quarterback for the Hokies and played almost all of the first three quarters, giving way to Michael Brewer for the last two plays of the third quarter and the fourth quarter. Motley turned it over three times, including two interceptions and a critical fumble deep in Tech territory to open the game. Brewer was responsible for the fourth turnover, an interception after the Hokies had fallen behind by ten points in the fourth quarter.

Motley’s fumble came on Virginia Tech’s first possession of the game, and it was recovered by the Hurricanes on the Tech three yard line. Miami converted that into a touchdown for an early 7-0 lead. Motley’s two interceptions came in the third quarter, and after the second one was turned into a field goal for a 23-13 Miami lead, the Hokies inserted Michael Brewer at quarterback.

Motley otherwise played fairly well statistically, completing 14-of-23 passes for 136 yards and a TD, and running it 8 times for 40 yards. (He lost 14 yards on three sacks, giving him 11 rushes for 26 yards for the game.) His touchdown pass came on a nifty option pitch to Travon McMillian that went forward and was thus ruled a pass. But his turnovers were too much for the Hokies to overcome.

“Just disappointed. Disappointed with myself,” Motley said afterwards. “I turned the ball over too many times in some costly positions.”

Hokies head coach Frank Beamer and offensive coordinator Scot Loeffler were philosophical about their decision to start Motley over Brewer, who was available.

“It’s a lot easier to make that decision after I see what happens than it was before,” Beamer said.

“I think we made the right decision. Did it work out today? Absolutely not,” Loeffler said. He added, “You had to make a decision, and that’s what we did, and I don’t second guess that decision whatsoever.”

For the second straight game, the Hokies started Travon McMillian (16 carries, 99 yards, 6.2 ypc) at tailback, and gave the large majority of the carries to McMillian and fullback Sam Rogers (5 carries, 22 yards, 4.4 ypc).  Trey Edmunds saw some action at tailback, carrying three times on third down. He picked up two of the first downs.

Isaiah Ford’s TD catch was the 13th of his career, moving him up to a tie for sixth on the all-time receiving touchdowns list. Ford had four catches for 76 yards, and Cam Phillips added four for 26. Tight ends Bucky Hodges, Ryan Malleck, and even Kalvin Cline each had two catches.

Defensively, the Hokies gave up 395 yards to Miami, about 50 yards below their season average, but Miami quarterback Brad Kaaya found receivers open in the slot and on slants throughout the game. Unlike previous games, it wasn’t any one Virginia Tech player who was singled out. Kaaya (19-30, 296 yards, 2 TDs) completed passes to a variety of receivers against  a variety of Tech linebackers, safeties, and cornerbacks.

The Hokies were led in tackles by Andrew Matuapuaka, who rebounded from some poor recent performances to tally ten tackles and two pass breakups. Chuck Clark had nine tackles, and Luther Maddy had seven tackles and Tech’s only sack.

Unlike last year, Miami didn’t dominate the Hokies with the running game. The Hurricanes had 39 carries for 99 yards, led by Joe Yearby with 60 yards on 19 carries, a far cry from Duke Johnson’s 29 carries for 249 yards in Miami’s 30-6 rout last season in Lane Stadium.

Instead, it was all about the turnovers and Miami’s passing game. The Hokies are now 3-4 overall, 1-2 in the ACC. It’s their first losing record at the 7-game point since 1992 (2-4-1), though it’s worth noting that the Hokies have had a losing record late in the year since 1992. They were 5-6 after 11 games just last season.

“We’re frustrated,” Motley said. “We’re very frustrated. We’re upset. We’re angry. But we can’t feel sorry for ourselves. Anything can happen [in the ACC]. We’re just going to control what we can control and try to win out.”

After the Hokies stopped Miami on the Canes’ first possession, Motley dropped back to pass on 2nd and 4, and as he drew the ball back, it slipped from his hand. The Hurricanes recovered on the Hokie three yard line, and Joe Yearby ran it in on the next play for a 7-0 Miami lead.

Tech roared right back, and on the strength of a 22-yard run by McMillian and a 35-yard pass from Motley to Bucky Hodges, drove to the Miami 11-yard line. But Motley was sacked on 3rd and 8, and the Hokies settled for a 30-yard field goal from Joey Slye to make it 7-3.

Miami scored on a 13-yard pass on their next possession, but an offensive pass interference on the play forced the Canes into 2nd and goal from the Hokie 28. After a 22-yard Yearby run, Miami kicker Michael Badgley punched in a 24-yard field goal for a 10-3 Canes lead.

Tech answered with their best drive of the day, a 10-play 75-yard possession that featured five McMillian and Rogers carries for 26 yards, and Motley going 5-for-5 for 49 yards. Motley’s fifth completion was actually an option pitch to McMillian. Motley pitched it from behind the line, and McMillian caught it beyond the line and carried it in for a 9-yard TD to tie the game at ten points.

Each team kicked a field goal in a second quarter that featured less offensive firepower … until Miami took over on their 21-yard line with 58 seconds left. After a false start pushed the Hurricanes back to their 16 yard line, they were apparently content to just run out the clock from there. But the Hokies started spending timeouts in an effort to get the ball back before the half, and it backfired.

After an unsportsmanlike conduct penalty pushed the Canes back to their 11-yard line with 41 seconds left, the Hokies called a timeout. Facing 3rd and 20 from the 11, Kaaya threw a 45-yarder to Herb Waters, who hauled it in against Terrell Edmunds. Two plays later, Woody Baron committed a roughing the passer penalty that moved the ball to the Tech 21. Three plays after that, Kaaya hit Rashawn Scott for a 7-yard TD pass with four seconds left that put Miami up 20-13.

“In the past we’ve done that [called timeouts] and we’ve created some plays,” defensive coordinator Bud Foster said. “That’s what we were hoping to do and unfortunately it didn’t work that way this time.”

Beamer said he wanted to attack right before halftime. That's why he took the timeouts. #Hokies

Tech’s defense held up during the third quarter, but the offense was a disaster. Motley threw an interception at the Miami 19 on Tech’s first possession. On the Hokies’ second possession, Tech drove to the Miami 34. Facing a 4th and 9 from there, the Hokies lined up for a field goal, but Miami committed a pre-snap substitution infraction, moving the ball to the 29 and making it 4th and 4. Frank Beamer decided to go for it, and Motley missed hooking up with Sam Rogers, and the Hokies turned the ball over on downs, still down 20-13.

On Tech’s third possession, Motley threw another interception, this one on the Hokies 31, and it was returned to the 28. Miami drove all the way to the Hokie 1-yard line, then botched a shotgun snap on 3rd and goal from there. The Canes settled for a 21-yard field goal and a 23-13 lead with 58 seconds left in the third quarter.

At that point, the Hokies put Brewer into the game. An illegal block on the kickoff backed the Hokies up to their eight yard line, and Brewer started moving Tech down the field from there. At the Hokie 41, Tech faced 3rd and 1, and Trey Edmunds, who had picked up first downs on two previous third downs, was stopped for no gain, forcing a punt.

After the Hokie defense held, Tech took over on their own 47 with 8:47 left. Brewer hit Ryan Malleck for 22 yards from there, and two plays later, as Brewer took a hit, he lofted a pass to Isaiah Ford, just inside the pylon on the left side. Ford hauled it in right at the end zone sideline, and after a video review, the play stood, and Tech was down just 23-20 with 7:20 to go.

On VT’s next possession, Brewer threw an interception to Artie Burns, the second of the day for Burns, on the very first play. Miami ran out the clock for the win.

With the loss, the Hokies fall to sixth place in the ACC Coastal Division, ahead of only Georgia Tech. The Hokies face Duke (5-1, 2-0) next Saturday in Blacksburg, at 3:30 on ESPNU.

Note: All quotes in this story are from the Twitter feeds of Andy Bitter and Mike Barber, plus Andy Bitter’s game recap. 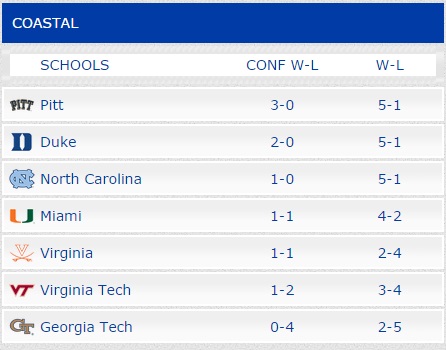