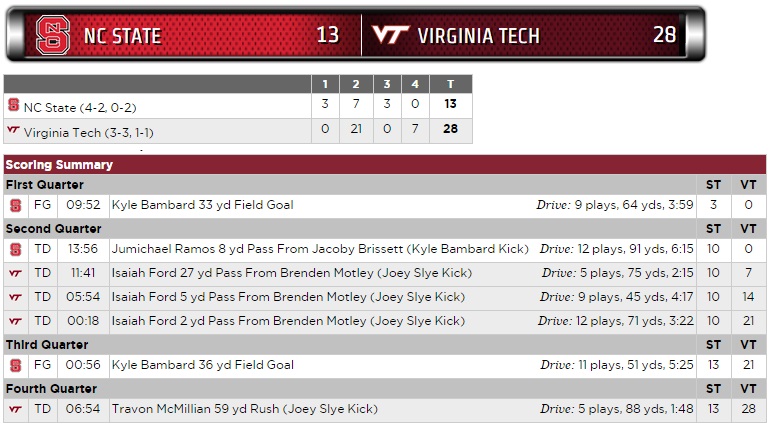 Blacksburg, VA — Virginia Tech got off to a bad start, falling behind NC State 10-0, but then outscored the Wolfpack 28-3 to grab a key ACC win.

Frank Beamer vowed after last weekend’s loss to Pittsburgh that the Hokies would do a better job getting the ball into the hands of their playmakers, and they did just that. Isaiah Ford caught three touchdown passes in the second quarter alone, the first time a receiver has caught three in one quarter under Frank Beamer. The Tech record for TD catches in a game is four, by Ernest Wilford in Tech’s 50-42 triple overtime loss to Syracuse during the 2002 season.

Tailback Travon McMillian carried the ball 11 times for 96 yards, including a 59-yard touchdown run that put the game out of reach midway through the fourth quarter. J.C. Coleman and Trey Edmunds didn’t register a single carry in the game, as the Hokies relied on McMillian and Sam Rogers (eight carries, 57 yards) to run out of the backfield.

“I think he’s a guy who can make a difference in a ball game,” Tech head coach Frank Beamer said of McMillian. “He has speed and power. Our fans are going to like that guy a lot before he leaves here. He’s got it.”

Greg Stroman, who was moved from cornerback to wide receiver earlier in the week, carried it four times for nine yards, primarily on jet sweeps.

“We only had him in there for a few things, because I didn’t want to jam things up,” Beamer said, “but we’re going to add more things with him this week. I think he’s a guy who can help change a game around.”

As a team, the Hokies rushed 36 times for 200 yards, one week after rushing for just nine yards against East Carolina.

Michael Brewer did not play for the Hokies at all, even when starting quarterback Brenden Motley left the game briefly in the third quarter. Dwayne Lawson came in instead, and threw a single pass (incomplete) before giving way to Motley for the rest of the game.

Motley otherwise went the distance, and he took a beating, limping noticeably at times. Motley was solid in the passing game, going 14-28 for 158 yards and the three TDs to Ford, with no interceptions. Motley was only sacked once, but he carried the ball nine times for 44 yards and took other hits in the pocket.

The Hokie defense got off to a rough start, giving up 145 yards in the first quarter and ten points in NC State’s first three possessions. When State’s Jumichael Ramos caught an 8-yard TD pass early in the second quarter, it finished off a 12-play, 91-yard drive for the Wolfpack and put them up 10-0, but State failed to get in the end zone the rest of the way. After the first quarter, NC State gained just 125 yards the remainder of the game, giving them just 270 yards for the game.

In the last two weeks, Hokie opponents have averaged just 264 yards and 15 points.

“We had to really work hard today,” Tech defensive coordinator Bud Foster said. “We had to adjust throughout the game, because they showed some things we hadn’t seen. We executed, and this was a good football team we beat today.”

The Hokies registered four sacks for the second week in a row, and Ken Ekanem got on the board with 9 tackles, 2.5 TFL, and 1.5 of Tech’s four sacks.  The Hokies had 11 tackles for loss, tying their season high against East Carolina.

Adonis Alexander increased his team-high interception total to three when he picked off NC State quarterback Jacoby Brissett in the fourth quarter. It was Brissett’s first interception of 2015, after 241 attempts without a pick, and Tech’s seventh interception of the season.

Penalties were a critical statistic in the game. The Hokies, one of the most penalized teams in the nation, committed seven penalties for 48 yards, but NC State was flagged nine times for 81 yards. The Hokies gained first downs five times on NC State penalties, while NC State only received one first down from VT penalties.

After a three-and-out by the Hokies to start the game, NC State took over on their 20 yard line and quickly moved to the Hokie 15 on six plays. From there, the Hokies stiffened, and NC State converted a 33-yard field goal by Kyle Bambard.

After the teams traded a few possessions, the Pack went on a monster drive, going 91 yards in 12 plays over 6:15. NC State converted a TD when Brissett threw an 8-yard pass to Jumichael Ramos, who went up over Chuck Clark in the end zone to score. That put NC State up 10-0 with 13:56 to go in the second quarter, and at that point, NC State had outgained the Hokies 155-29.

The Hokie offense finally got going … in spades. First, Tech drove 75 yards in just five plays, four of which were Brenden Motley passes for 60 yards. Motley hit Isaiah Ford with a 27-yard TD pass down the left sideline, dropping the ball into Ford’s arms in the corner of the end zone.

After a State three-and-out, the Hokies then went 45 yards in 9 plays, scoring when Motley rolled right and found Ford with a five-yard TD, just inside the end zone near the pylon, to put the Hokies up 14-10.

Then came another State three-and-out, and another Hokie TD drive, this one 71 yards in 12 plays, capped by Ford’s third TD catch in just over 11 minutes. This time, Motley hit Ford with a two-yarder. Again Motley rolled right, and Ford sat down in the end zone, and Motley fired it to him.

The third score came with just 18 seconds left to go in the quarter and put Tech up 21-10 at half time. In the second quarter, the Hokies gained 156 yards and had 12 first downs. On the three TD drives, Motley went 8-of-14 for 102 yards.

The third quarter was a slugfest, with the Hokie offense once again bogging down, gaining just 34 yards and failing to score. At one point, NC State drove from their 30 to the Hokie 14 yard line on the strength of nine straight rushes that netted 56 yards. But on 3rd and 2 from the 14, the Pack inexplicably called a pass play, and Brissett had to throw it out of bounds under pressure. State settled for a 36-yard field goal after a delay of game penalty, making it 21-13, Hokies.

The game stayed a deadlock well into the fourth quarter, but Travon McMillian slammed the door on the Wolfpack with this 59-yarder, behind a tremendous downfield block by Wyatt Teller.

That score came with 6:54 left. The Hokies registered two more stops the rest of the way, with Brandon Facyson knocking down a fourth down pass in the end zone, and Adonis Alexander picking off Brissett with 1:20 remaining.

“Some wins are bigger than others,” Beamer said, “and this one was big, and critical.”

Virginia Tech returns to action next Saturday at Miami. The game is scheduled for 3:30 and will be televised on ESPNU.