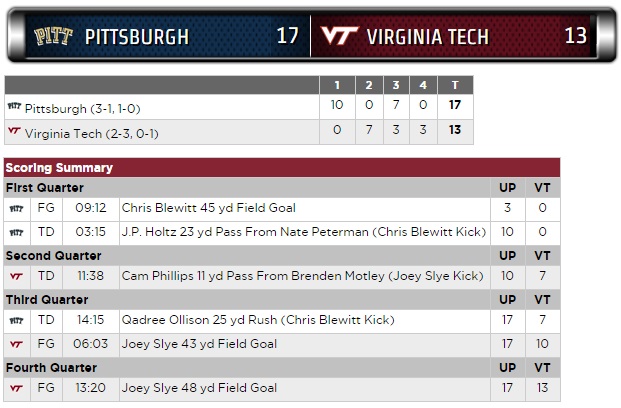 In one of the ugliest games we’ve seen recently, Pitt defeated Virginia Tech 17-13 in Lane Stadium on Saturday afternoon.  The Hokies dropped to 2-3 on the season, and they are now 0-1 in the ACC.  Pitt improved to 3-1 and 1-0.

Statistics matter, unless they don’t.  In this particular case, you can’t hide from the statistics.  Virginia Tech gained exactly 100 yards of total offense.  That is the lowest amount of yards gained under a Frank Beamer team since Beamer’s first game as Tech’s coach in 1987 when they gained 60 yards against Clemson.

It’s easy to pick on the rushing totals (9 yards, including 57 yards lost on seven sacks), but the passing yards weren’t much better.  The Hokies threw for 91 yards in the course of the game, and on the whole they managed to gain 300 feet of total offense in three hours and three minutes of game time.  63 of their 100 total yards came on their lone touchdown drive in the the first half.

Pitt got off to a 10-0 lead, but the Hokies got back into the game thanks to a 10-play, 83 yard drive (25 yards of which came on Pitt penalties, minus 5 yards of VT penalties, for a total of 20 yards gained through penalties) that culminated in an 11 yard touchdown pass from Brenden Motley to Cam Phillips.  Despite the rough start to the game, Tech seemed to be back in it at 10-7.

The Panthers held a 10-7 halftime lead, but extended it to 17-7 after a two-play, 68 yard touchdown drive to begin the third quarter.  Qadree Ollison had both carries off the left side, and two gains of 43 and 25 yards gave Pitt a 10 point lead.

Tech’s defense clamped down for the remainder of the game, and it was up to the offense, which unfortunately couldn’t produce.

Despite their lack of offense, Tech still had a chance to win the football game.  Thanks to a Pitt fumble (one of four on the day, only one of which the Hokies recovered) Tech had the ball on the Panther 23 with 7:37 left in the third quarter.  After Brenden Motley was sacked on first down, the Hokies couldn’t manage to get anything going.  After a 4 play, -3 yard drive, Joey Slye kicked a 43 field goal to make the score 17-10 Pitt.

Early in the fourth quarter Slye added a 48 yard field goal to make it a 17-13 game.  From that point on, the Hokie defense held out, but the offense couldn’t take advantage.  Here’s a quick recap of Tech’s fourth quarter drives after the Slye field goal…

1 play, 0 yards, Motley interception
3 plays, -9 yards, after the Hokies blocked a field goal
4 plays, -15 yards after the VT defense got a stop

To sum it up, after Slye’s final field goal, the Hokies ran eight plays for a grand total of -24 yards and one interception.  In the end, Tech’s lack of offense is the reason they lost the game.  The defense could have played better, but it’s tough to argue with 17 points and 276 total yards.

The ugliest part of the game was Tech’s passing attack.  Brenden Motley was sacked seven times, and he even left the game briefly with an apparent arm injury after an interception in the fourth quarter.  He was hit hard on the play, as he was on many passes throughout the game.  Dwayne Lawson warmed up on the sideline, but Motley returned for the final two drives, though he and the rest of the offense didn’t have any success.

The Hokies have now lost two games in a row, and they will look to right their season on Friday night when they take on NC State (4-1) in Lane Stadium. The game starts at 8:00 and will be televised on ESPN.