Coming off a disappointing loss to East Carolina, Virginia Tech will return home to take on their long-time nemesis: the Pittsburgh Panthers. The Hokies owned this series in the 1990s, but Pitt has rebounded to win five of the last six, dating back to 2001. However, the last time these teams faced off in Lane Stadium, the Hokies won 19-9 in 2013.

Believe it or not, that 2013 Tech win over Pitt is somewhat of a historical moment. It marks the last time Virginia Tech beaten a Power 5 team (besides UVA) at home. That’s almost hard to believe, but it’s true.

The Hokies have lost six of their last seven home games to Power 5 conference teams, with their one win coming over a team (UVA) who is Power 5 in name only. You have to go back to October of 2013 to find the last team with a pulse (Pitt) that the Hokies beat at home. In that span, Tech also lost to East Carolina in Lane Stadium. It’s cliché to say that we’re glad the Hokies are getting back home after two road games, but recent history says there’s a very strong chance that they’ll lose to the Panthers on Saturday.

That being said, each game is its own separate entity. Saturday’s game won’t be influenced by Tech’s recent skid at home. It will come down to talent, execution, turnovers, and taking advantage of opportunities. Let’s take a quick look at Pitt…

Pitt Offense vs. VT Defense, By the Numbers

Here’s a look at Pitt’s advanced stats numbers. We’ll use the S&P+ model…

Here’s how that compares to Virginia Tech’s defensive numbers…

Those defensive numbers are completely shocking around these parts.

How Much Will Chad Voytik Play?

Nate Peterman (6-2, 225, r-Jr.) has surpassed Chad Voytik (6-1, 215, r-Jr.) as Pitt’s starting quarterback this year, despite the fact that Voytik started all of last season. Both guys have played, but Peterman has played a lot more. Here are their numbers:

Peterman is a transfer from Tennessee, and the Pitt coaching staff seems to have more trust in him than Voytik. That being said, it’s well-known that Virginia Tech has struggled to stop mobile quarterbacks recently. That includes Voytik, who ran for 118 yards (despite being sacked twice) against the Hokies last season.

It’s likely that we’ll see both quarterbacks on Saturday. I expect Peterman will be Pitt’s guy for the rest of the season, but Saturday might be Voytik’s day for two reasons.

1: Tech’s recent struggles against mobile quarterbacks.
2: The impending bad weather will make this a ground game.

Tech will prepare for both, but on paper Voytik seems like the better option to play against the Hokies.

Pitt’s star tailback James Conner was lost for the season with a torn ACL in Pitt’s first game. However, new starter Qadree Ollison (6-2, 230, r-Fr.) has filled in admirably by averaging 101.7 yards per game. Those numbers are a bit misleading, however. Here are his game by game numbers…

Against Iowa, it was true freshman Darrin Hall (5-11, 215) who got the bulk of the carries (14 carries for 38 yards). Hall has 29 carries on the year, while Chris James (5-11, 210, So.) has nine. All are listed in a tie atop the Pitt depth chart. It’s unknown who will get the bulk of the work against Virginia Tech, though it’s very unlikely to be James.

Pitt was off last week, so they’ve only played three games. Their tailback situation is still an unknown, even though Ollison’s stats look good on paper. Their team rushing stats against teams other than Youngstown State are not good…

That’s not good. It’s still a small sample size, but so far the Pitt running game has been greatly impacted by the loss of Conner.

Tyler Boyd vs. a Humbled Secondary

Tyler Boyd is one of the best wide receivers in college football. He will be a very high pick whenever he decides to leave Pitt. He was suspended for the first game of the season, but still leads the team in receptions and receiving yards. Here are their top three targets thus far…

Holtz is a tight end, while Hall is a backup tailback. That should tell you all about the Pitt wide receiver depth. From that standpoint, they aren’t much different than Virginia Tech. Also, remember that Boyd’s 21 catches came in just two games.

Right now, Virginia Tech’s secondary is projected to look like this against Pitt…

On the short side of the field, Tech will have the unproven r-freshman Terrell Edmunds and the true freshman Adonis Alexander. Alexander has exceeded expectations thus far, but he and Edmunds lined up right next to each other in the secondary seems like a good place to attack.

On the other side of the field, Tech should be fine with Chuck Clark at free safety and Brandon Facyson at field corner, but nickel Greg Stroman is a major question mark after last week’s game against ECU.

I’ll be very interested to see where Boyd lines up on Saturday. If I were Pitt, I’d come up with a game plan that tries to isolate Boyd on the short side of the field and against Greg Stroman on the wide side of the field. Tech could also use senior Donovan Riley at the boundary corner spot, and that’s another thing I’ll be looking for this weekend.

At any rate, Boyd is easily Pitt’s most dangerous player on offense. Bud Foster has to come up with a way to stop him besides playing man coverage across the board. Tech’s secondary was humbled in last week’s loss to ECU. They’ll be looking to respond with a big game, and Boyd will provide an excellent challenge.

Pitt Defense vs. VT Offense, By the Numbers

On paper, this is an extremely even matchup. Tech is throwing the ball efficiently, while Pitt is stopping the pass at a very efficient rate. Both teams could do better in the running game.

You couldn’t have told me before the season started that any defense, much less Pitt’s, would be more disruptive than Virginia Tech’s at the end of September. That’s no disrespect to Pitt. The Hokies were one of the best teams in the country a year ago in tackles for loss and sacks, but so far in 2014 the same magic hasn’t been there.

Center Eric Gallo will have a big challenge on Saturday with the massive Jarrett lined up in front of him.

The Secondary is a Strength

Opponents are completing just 52.9% of their passes against Pitt this season, and they’ve thrown just one touchdown pass.

CB Lafayette Pitts (5-11, 195, r-Sr.): This is Pitt’s fourth season as a starter in the Panther secondary. He is the most experienced defender on this Pitt team.

CB Avonte Maddox (5-9, 170, So.): Despite being only a true sophomore, Maddox is very experienced. He started the final six games of last season. He started against the Hokies last year, and also contributed on special teams.

FS Terrish Webb (5-11, 190, Jr.): Webb started the first eight games of last season before a knee injury sidelined him. He’s back healthy as a junior, and he has Pitt’s lone interception of the season.

SS Jordan Whitehead (5-11, 185, Fr.): The true freshman was a top 100 player coming out of high school. He was a great high school player on both sides of the ball. Virginia Tech recruited him heavily, but he chose to stay in-state at his hometown school. He leads Pitt in tackles, and he also has two tackles for loss.

Tech had success throwing the ball downfield against Pitt in the second half last season. Will they be able to do the same this year in what looks to be dreary weather?

Last week I thought Virginia Tech held the advantage over East Carolina because the Pirates entered the game averaging just 3.4 yards per carry. If it rained, I thought Tech’s running game would be far superior. The numbers backed up that theory. Unfortunately, the numbers and I were wrong, and James Summers was right.

I don’t know what to expect on a week-to-week basis from Virginia Tech. It’s been that way for the last couple of years, and to be honest that’s the way mediocre teams play. They aren’t consistent, and they are difficult to predict. The Hokies are fully capable of beating Pitt on Saturday, and they are also fully capable of losing.

If James Conner were playing, I’d say the matchups favored the Panthers. It’s going to be rainy on Saturday. Here were the projections when I checked this morning…

In other words, the forecast is worse for this Saturday than it was for last Saturday, and last Saturday was pretty wet. That all sets up for a James Conner type of day.

However, Pitt doesn’t have James Conner, and their running game struggled against Akron and Iowa without him in the lineup. Tyler Boyd is outstanding, but do the Panthers have any other threats to complement him? So far nobody has stepped up.

Because their running game has struggled, I’m begrudgingly going to pick Virginia Tech in this game, even though I know there’s a decent chance that I may come to regret it. Pitt is very capable of marching into Blacksburg and beating us, and I certainly wouldn’t bet against them doing it.

Will Stewart’s Take: It’s customary for expectations to be down the week after a loss like the one Virginia Tech suffered at ECU, and to feel as if the Hokies aren’t going to win again vs. a decent opponent.

But, while Virginia Tech was outcoached and outplayed at ECU, the breaks also went against them: two potentially damaging ECU fumbles weren’t recovered by the Hokies. One was a fumble by an ECU wide receiver that went right to another Pirate player, and ECU later scored a TD on that drive. ECU muffed a punt that was nearly recovered in the end zone for a VT touchdown, but it went out of bounds instead. And lastly, a terrible interference call against Chuck Clark kept alive an ECU drive that resulted in a touchdown.

Them’s the breaks, and them’s also 21 points to the bad in a 7-point loss. Typically, those kinds of breaks don’t go against you two weeks in a row. I’m not saying the Hokies will luck out against Pitt, but I also doubt that very many twists of fate will go against VT. So there’s that.

Let me say for the record that I think Chad Voytik will be the man on Saturday. I’ll be surprised if Pittsburgh doesn’t lean on him, given the predicted heavy rain, Voytik’s record of success against VT last year, and VT’s struggles to contain running QBs … and the rush in general.

Here’s a hideous infographic from OXVT: 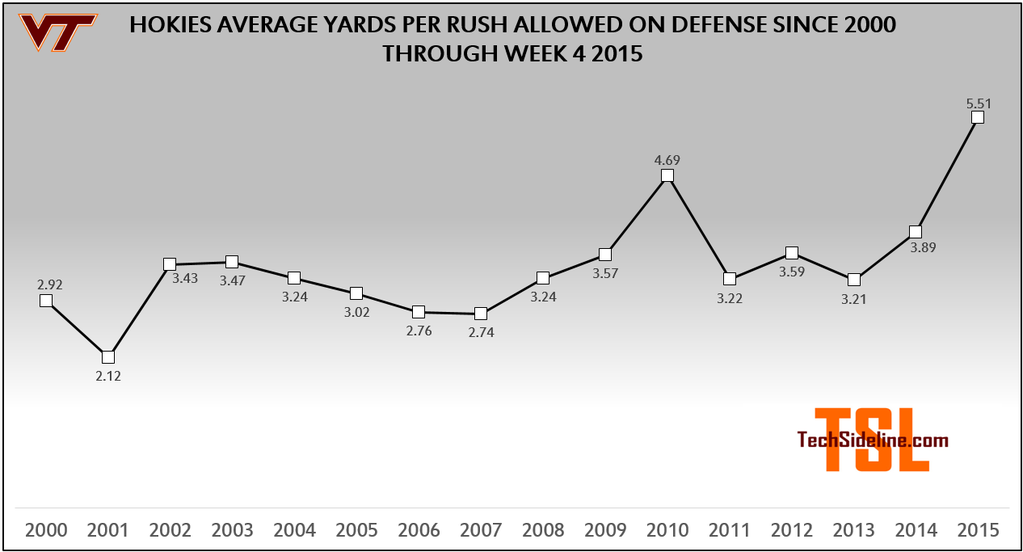 I said in this week’s Monday Thoughts that I was going to pick VT to win this game, and I’m going to stick with that (because you won’t like my picks for the next two weeks…). How? I’ll be honest: I’m not really sure. Just get the breaks, and play better, I guess.

How’s that for analysis? Yeah, not good. But in the last three-plus seasons, the Hokies have become almost impossible to predict from week to week. So here’s another leap of faith. I seem to be taking these often:

Who will win the Virginia Tech-Pitt game?