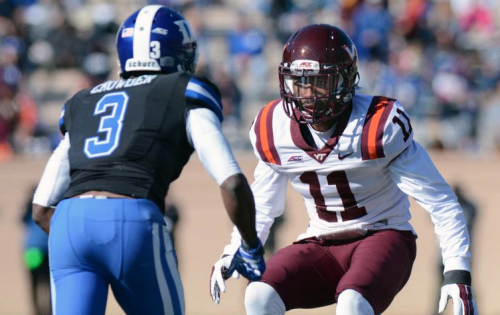 There is good news and bad news on the Virginia Tech injury front.  One defensive starter could potentially return this weekend against Pitt, but another is likely out.  Also, Virginia Tech will pursue a medical redshirt for Shai McKenzie.

McKenzie to Redshirt; Williams To Be Determined

McKenzie tore his ACL last season against Western Michigan.  He spent the offseason doing rehab, and he played against Furman and Purdue.  In those two games he had 13 carries for 50 yards (3.8 ypc).  However, he did not dress for Saturday’s game with East Carolina, which indicated that we could potentially hear some redshirt news coming soon.

“He’s still a little rusty,” runny backs coach Shane Beamer said.  “We don’t think he’s 100%.  He’ll run the ball physical and run you over, but his make-you-miss ability is still coming along.”

Not only did McKenzie tear his ACL last season, but he also tore the same ACL as a senior in high school.

Fellow true sophomore running back Marshawn Williams could play this year, though the decision has not been made.

“Marshawn’s the one that we’d like to play this year,” Beamer said. “Obviously he tore his ACL later than Shane did, so the fact that we’re having this conversation about his availability is a testament to Marshawn and this training staff.”

Still, no decision has been made, and it won’t be made this week.  The coaching staff is hoping he can do more and more in practice each week, and if he proves to be more effective than the other running backs on the team, he will play.  If not, then he will redshirt.

Kendall Fuller missed the East Carolina game with a right knee injury, and Frank Beamer said it is “very doubtful” that Fuller will play against Pitt this week.  That’s unfortunate, as Panther wide receiver Tyler Boyd is one of the top wide receivers in the country.  He is expected to be a very high draft pick in either 2016 or 2017.

Fuller’s replacement at boundary corner for the ECU game, Greg Stroman, was beaten repeatedly by the Pirates.  r-Freshman Terrell Edmunds is listed at the top of the boundary corner depth chart this week, though Donovan Riley could just as easily play the position.

If you recall, Fuller missed the second scrimmage of August and was seen on the sideline with his knee wrapped.  He was obviously injured for the first three games of the season, and was still wearing that knee wrap.  The training staff called it a sprain after the ECU game, but also indicated that his status will be further evaluated later on Monday.

Motuapuaka Could be Back for Pitt

Starting mike linebacker Andrew Motuapuaka could return for the Pitt game.  The original injury report stated that he could be out for up to four weeks, but Bud Foster was hopeful that he could be back before that.

Backup mike Sean Huelskamp was ejected for targeting in the second half against ECU, which means he is suspended for the first half of Saturday’s game against Pitt.  If Motuapuaka still isn’t ready by this weekend, true freshman Carson Lydon would be slated to get his first collegiate start.

The Tech medical staff does not list Motuapuaka as probable, questionable or doubtful, but Frank Beamer said he was “hopeful” that he could return this weekend.  It sounds as if we might not know until game time.