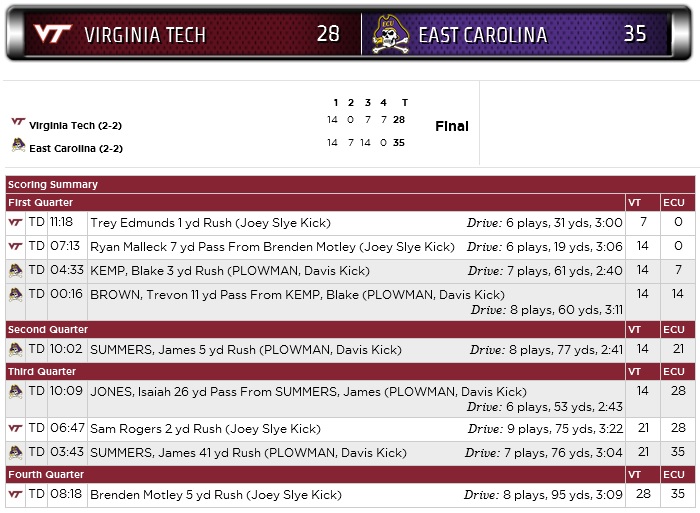 Greenville, NC — Virginia Tech jumped out to a 14-0 early lead on East Carolina, then collapsed and lost to the Pirates for the second year in a row, 35-28.

ECU backup quarterback James Summers torched the Hokies for 169 yards rushing and two touchdowns on just 21 carries. Summers replaced starting quarterback Blake Kemp in the second quarter, as a light rain turned into a steady downpour, and he led the Pirates to the win, gashing Tech’s defense for touchdown runs of five and 41 yards. He also threw a touchdown pass to Isaiah Jones.

The Hokies outgained the Pirates 439-410, but after taking a quick 14-0 lead, the Hokie offense went silent, and ECU went on an extended 35-7 run to take a 35-21 lead late in the third quarter. Tech scored a touchdown midway through the fourth quarter to close the gap to 35-28, but late in the game, facing a fourth and 2 at the VT 40, Brenden Motley hit tight end Bucky Hodges in the hands, but Hodges couldn’t reel in the pass, which was slightly tipped. The Hokies had one more possession after that, but they started on their own six yard line with 58 seconds left and no timeouts, and couldn’t get the ball downfield.

Though the yardage totals were fairly even, the Hokies struggled to extend drives. Tech converted just six of 16 third downs, while ECU converted six of 12, twice as many third down conversions as any other Tech opponent this season. Coming into the game, Tech opponents were eight of 39 (20.5%) on third down.

Brenden Motley was 20-of-35 for 281 yards, 1 TD, and 1 INT for the Hokies. Motley was 7-of-11 on third down, but only three of the completions resulted in first downs, and he also threw his lone interception on third down.

Meanwhile, all six of the Pirates third down conversions were six yards or longer: 3rd and 6, 3rd and 7 (twice), 3rd and 8, 3rd and 9, and 3rd and 13. ECU also converted a 3rd and 13 on a questionable pass interference call against Chuck Clark, and ECU scored on the next play. Lastly, the Pirates converted a 4th and 12, scoring on a 26-yard TD pass.

The Hokies were also undone by penalties. One of the most penalized teams in the nation, the Hokies committed 11 more for 89 yards. Most of the penalties were legitimate, but a couple were terrible calls. In addition to the pass interference call against Clark, which was a complete phantom call that led to a touchdown on the next play, starting Hokie linebacker Sean Huelskamp was ejected in the fourth quarter for a questionable targeting call, when he made a tackle against Summers as Summers was sliding to the ground. Huelskamp, who led the Hokies with ten tackles, will miss the first half of next week’s game against Pittsburgh per NCAA rules.

One of the most costly penalties for the Hokies came on offense and was a pre-snap penalty. Motley threw a 22-yard touchdown pass to Bucky Hodges in the second quarter that was wiped out by an illegal formation call, and Joey Slye missed a 37-yard field goal a few plays later.

In receiving, Isaiah Ford tied his single-game high with eight catches for 95 yards, while Bucky Hodges had a season-high five catches for 73 yards.

The defensive story of the game for the Hokies was the absence of preseason All-American cornerback Kendall Fuller with a knee issue. The Hokie coaching staff said that Fuller is suffering from a knee sprain that dates back to training camp, and the knee didn’t feel good enough to play on.

“We were planning on playing him,” defensive coordinator Bud Foster said. “They injected him this week. He was feeling pretty good in the morning but when we went out on the field, it just didn’t feel very good.”

The Hokies started Greg Stroman at cornerback, and Stroman was victimized for both of ECU’s passing touchdowns.

ECU won the toss and elected to receive, and on the second play from scrimmage, Greg Stroman picked off Blake Kemp, jumping an inside route and intercepting it cleanly. The Hokies drove 31 yards in 6 plays to take a 7-0 lead on a one-yard run by Trey Edmunds. A few plays later, Kemp fumbled into the air after being hit by Ken Ekanem, and Mook Reynolds plucked it on the ECU 36 and ran it down to the 19. Six plays later, Brenden Motley hit tight end Ryan Malleck in the back of the end zone with a seven-yard TD pass to put the Hokies up 14-0 early.

Wyatt Teller was called for a personal foul on the touchdown play, pushing the Hokie kickoff back to the 20 yard line. ECU returned the kickoff to their 39-yard line, and then Kemp hit Davon Grayson for a 24 yard play to the Hokies’ 37. That seemed to get the Pirates started, and they scored a few plays later on a 3 yard read option keeper by Kemp to close it to 14-7.

ECU followed that up with an 8-play, 60-yard drive that ended in an 11-yard TD pass from Kemp to Trevon Brown with 16 seconds left in the quarter to tie it at 14.

After a Tech punt, ECU scored on their third straight possession, going 77 yards in eight plays. With the rain coming down steadily, Summers replaced Kemp on the drive and completed a 30-yard pass and ran for 24 yards on consecutive plays. Summers then finished off the drive with a five-yard TD run on a QB draw.

That made it 21-14. The Hokies squandered a chance to score on their next possession. Motley hit Bucky Hodges with a well-thrown 22-yard TD pass, but the Hokies were flagged for an illegal formation. A few plays later, Joey Slye missed a 37-yard field goal, his first miss inside 40 yards this season, and the two teams went into half time with ECU leading 21-14.

After the Hokies went three and out on their first possession of the second half, ECU drove for their fourth straight touchdown, going 53 yards in six plays. On the drive, Summers completed a pass of 29 yards to Isaiah Jones, then threw a 26-yard TD strike to Jones on fourth and 12. Jones sprinted to the end zone against single coverage by Stroman, outmuscled Stroman for the ball, and made a diving catch to put the Pirates up 28-14.

The Hokie offense finally woke back up, going 75 yards in nine plays to close it to 28-21. Motley hit Bucky Hodges for a 32-yard play where Hodges caught it short, bounced off a defender, and took it upfield to the ECU 30. Four plays later, Sam Rogers bulled in from the two yard line for Virginia Tech’s first score in 30 minutes.

Sadly for the Hokies, ECU responded immediately. On third and six from the ECU 42 yard line, Summers hit Quay Johnson for 17 yards, and on the next play, Summers took it right up the middle for a 41-yard rushing TD. On the play, Summers kept it on the read option, put a spin move on Chuck Clark, and then simply wrestled out of the grasp of Ken Ekanem, taking it untouched from there for the long TD. ECU led 35-21, with 3:43 to go third quarter.

The Pirates wouldn’t score again, but they didn’t need to. The Hokies drove to the ECU 21 yard line on the strength of a 39-yard bomb from Motley to Isaiah Ford, but then Motley threw an interception on third and six from the ECU 21. Motley was late with the pass over the middle to Malleck, and it was tipped by a defender and intercepted by Jordan Williams.

Later in the quarter, Motley hit Cam Phillips across the middle with a short pass that Phillips turned upfield for a 60-yard play to the ECU five yard line. On the next play, Motley ran it in up the middle after faking a jet sweep. That made it 35-28 with 8:18 left, giving the Hokies hope.

On ECU’s next possession, Summers ran up the middle and was tackled by Sean Huelskamp as he slid. The officials called targeting on Huelskamp, and after a lengthy video review, the officials ejected Huelskamp for the remainder of the game. By NCAA rules, Huelskamp is out for the first half of next week’s game against Pittsburgh, as well.

The Hokies forced a punt and had two more possessions the rest of the game. The first possession started on Tech’s 4-yard line with 4:35 left and ended on fourth and two when Motley threw a pass down the middle to Hodges that was slightly tipped but couldn’t be reeled in by Hodges, despite hitting him in the hands.

Tech had another possession that started on their 6-yard line with 58 seconds left, but the Hokies had no timeouts and ran out of time at their 41, heaving a Hail Mary that wasn’t caught as time expired.

With the loss, the Hokies fall to 2-2, and the out of conference portion of their schedule is over. The Hokies’ next game is at home against Coastal Division foe Pittsburgh, October 3rd at noon. The game will be televised by RSN. Check local listings.