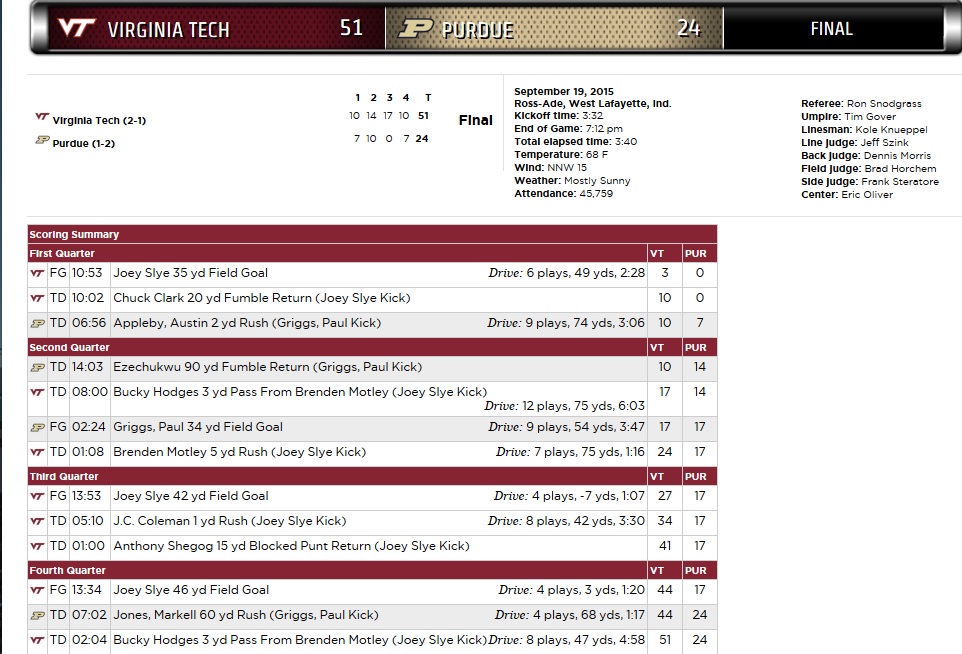 Virginia Tech defeated Purdue 51-24 on Saturday in a game that was arguably not as close as the final score indicated.  The Hokies improved to 2-1 on the season, while the Boilermakers dropped to 1-2.

You wouldn’t know it from the final score, but the first half was close.  After jumping out to a 10-0 lead, Tech trailed 14-10 after a 90 yard fumble return for a touchdown, and the game was later tied at 17.  The Hokies led 24-17 at halftime, but this was one of those rare games where the victor overcame adversity and still managed to blow the loser out.

Tech outgained Purdue 471 to 265, including a 238 to 144 advantage in rushing yards.  Many of the Boilermakers’ rushing yards came on a 60 yard touchdown run by Markell Jones against the #2 defense in the fourth quarter.

The best part about Tech’s rushing attack is that nearly all of it came from the running back position.  Quarterback Brenden Motley ran for 24  yards, while Tech’s running backs accounted for the other 214.  Trey Edmunds led the team with 72 yards on nine carries.

Motley, making his first career road start, was 15-of-23 for 220 yards.  He finished with two touchdown passes – both to Bucky Hodges.  His only blemish was a fumble on a blindside sack and fumble that was returned 90 yards for a touchdown, but on the whole his performance was very much a positive for the Hokies.

Meanwhile, the Tech secondary was dominant.  As a team, Purdue completed just 12 of their 35 pass attempts for 121 yards.  They threw two interceptions and no touchdown passes.

Tech grabbed a 10-0 early lead thanks to a 20 yard fumble return for a touchdown by free safety Chuck Clark.  Kendall Fuller came free on a corner blitz and sacked quarterback Austin Appleby, while stripping him of the ball.

Despite the early positives, Purdue came roaring back to take a 14-10 lead.  Leading 10-7, the Hokies drove from their own two yard line to the Boilermaker three on the strength of a 61 yard pass from Motley to Isaiah Ford.  Unfortunately, the 95 yard drive netted no points, and in fact handed Purdue the lead.  On second and goal from the Purdue two, Brenden Motley was hit was a blindside sack and fumbled the ball.  Danny Ezechukwu returned the fumble 90 yards for a touchdown.

It was gut check time for the Hokies, who battled Purdue evenly on the scoreboard for most of the remainder of the first half.  Tech finally broke through with a seven play, 75 yard touchdown drive to take a 24-17 lead just before halftime.  Brenden Motley scored a rushing touchdown from five yards out, and from there it was all Hokies.

Tech went on to score the first 20 points of the second half, and that included an Anthony Shegog 15 yard return for a touchdown of a blocked punt by Terrell Edmunds.  It was vintage Beamer Ball in West Lafayette.  Not only did the Hokies dominate the game on the ground, but they scored on offense, defense and special teams.

Virginia Tech’s running game – and Purdue’s lack of a passing game – helped the Hokies control the clock 38:11 to 21:49.  They averaged 58 yards per return on their two kickoff returns (thank you Der’Woun Greene!), and they converted 7 of 16 third downs.  Meanwhile, Purdue was just 2 of 15 on third downs.

Isaiah Ford caught 6 passes for 128 yards, all of which came in the first half.  Travon McMillian added nine carries for 55 yards.  Tech had just two tackles for loss (though it seemed like more while watching the game live), but constantly pressured Austin Appleby.  Joey Slye made three of his four field goal attempts, including kicks from 42 and 46 yards.  His only miss was from 53 yards on a kick that was barely wide left.

Saturday marked the first time Virginia Tech has defeated a Power 5 opponent by 20 or more points since they beat Duke 41-20 back in 2012.  Were it not for Purdue’s 90 yard fumble return for a touchdown, Tech could have won this game 58-17.

The Hokies return to action next Saturday when they travel to Greenville to take on East Carolina.  Kickoff is at 3:30, and the game will be a reverse mirror telecast by ABC and ESPN2.