Purdue has struggled in recent years.

Darrell Hazell is in his third year as the Purdue head coach. He went 16-10 in two seasons at Kent State, including an 11-3 season in 2012.   He is a former assistant at Ohio State, Rutgers and West Virginia, and he is #4 on the hot seat on CoachesHotSeat.com. (As a comparison, Mike London is #2.)

The season got off to a bad start with a 41-31 loss at Marshall. Purdue’s defense didn’t play as poorly as the score might indicate, as the Thundering Herd returned two interceptions for touchdowns. The Boilermakers rebounded to defeat Indiana State 38-14 last weekend. 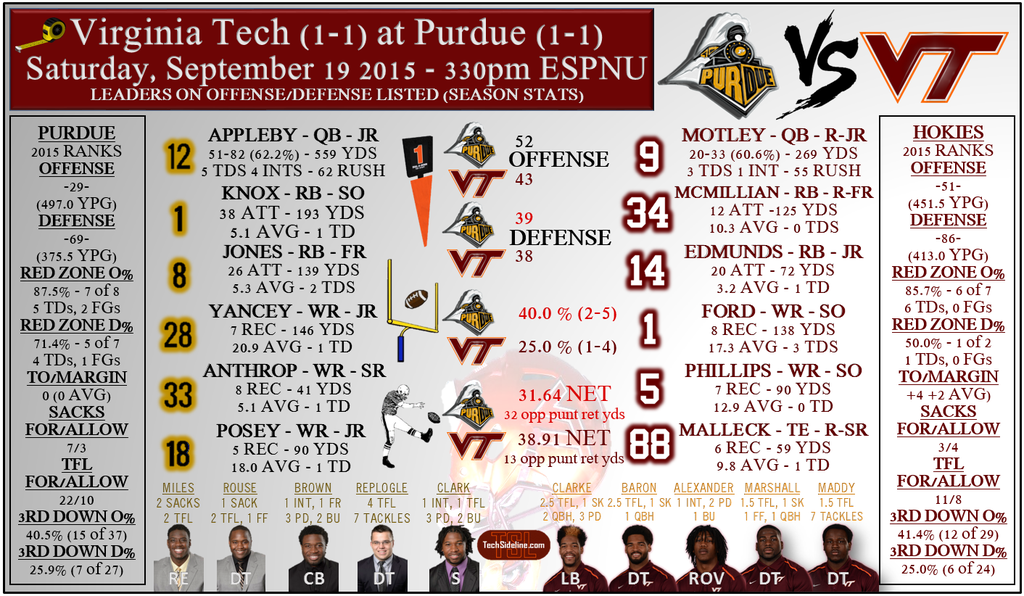 Here’s a look at the Purdue starting lineup…

The Boilermakers have a decent amount of experience, and in fact they have a lot of experience on the interior part of the offensive line.

Quarterback Austin Appleby is a talented player who is a threat with his legs in the read option. His arm is certainly good enough, and he certainly has the size. However, he has struggled with turnovers. He threw four interceptions in Purdue’s 41-31 loss at Marshall, including two that were returned for touchdowns.

He also struggled with turnovers a year ago, throwing 11 picks in 272 pass attempts, compared with just 10 touchdowns. He completed just 52.9% of his passes. Appleby is an improved player this year, and he has more weapons around him, but he is still a question mark when it comes to turnovers.

In the season opener at Marshall, Knox ran for 102 yards and he also hauled in six receptions for 36 yards.

Knox has help in the form of Markell Jones (5-11, 207, Fr.). He’s a young player, but he enrolled in January and has made a major impact early in his career.

Jones and Knox are a productive combination. The Boilermakers aren’t messing with the rotation, either. No other back has received more than one carry on the season. Austin Appleby has 24 carries from the quarterback position (90 gains, 28 lost, net 62). Look for those three guys to get the majority of the touches on Saturday.

On the whole, the Purdue running game is what we should be concerned with the most. The Boilermakers are averaging 217.5 yards per game on the ground, and 4.7 yards per carry. Virginia Tech has not been stellar against the run this year, particularly on the edge. The Hokies have to dial in on Saturday. If they can stop the running game, I don’t think Purdue has the ability to beat them on a consistent basis through the air.

As far as Purdue’s receivers go, Danny Anthrop is the most dangerous. He caught 38 passes for 616 yards a year ago before being injured in the ninth game of the season. Their other receivers have terrific size, but are still unproven at the college level.

Outside of the Tyrod Taylor/Danny Coale/Jarrett Boykin/David Wilson/Ryan Williams/Darren Evans offense, the Hokies have never been able to get much going against a Greg Hudson defense. However, Hudson has yet to face Scot Loeffler and Tech’s new offensive staff.

Middle linebacker Ja’Whaun Bentley took over the starting position as a true freshman last year, making 76 tackles. He was a Freshman All-American in 2014. He’s a huge linebacker from DeMatha High School in Maryland, where he was part of the same class as Tech wide receiver Cam Phillips. Through two games in 2015, he leads the team with 15 tackles and he has 2.5 tackles for loss.

Bentley was the #24 player in the state of Maryland, and he was offered by Iowa, Maryland, Pitt, Rutgers, Syracuse, UVA and West Virginia. Though he’s much bigger than a traditional Virginia Tech mike, in hindsight I wish the Hokies had offered him, because had Tech landed him, there’s no doubt in my mind that he would be our starting mike right now, and we wouldn’t have to pull Carson Lydon’s redshirt.

As a true sophomore, Bentley is already a team captain for the Boilermakers. He’s a big hitter, and I think he’ll blitz the interior of the Tech offensive line quite a bit on Saturday.

Purdue’s defense has been very active so far this season. They have 21 tackles for loss through two games, along with six sacks. Defensive tackle Jake Replogle already has four tackles for loss on the season, while sophomore end Antoine Miles leads the team with two sacks. This is a very big front seven, and for the most part they aren’t lacking in experience.

Cornerback is the most experienced position on the field for the Boilermakers. Anthony Brown and Frankie Williams are both seniors who have been starting for a long time. Williams was a Second Team All-Big Ten player last season, while Brown broke up 10 passes. Brown played at Hillsborough High School in Tampa, FL. If that sounds familiar, it should. It’s where Dwayne Lawson went to high school.

Purdue’s defense will show multiple fronts, and I expect them to challenge Tech’s offensive line by bringing a variety of blitzes. With their experienced corners, the Boilermakers play a decent amount of man coverage. Against the inexperienced Brenden Motley, I expect them to mix up their coverages to try and confuse him, and you can bet that they’ll do some things that they haven’t shown on film.

Purdue’s top two playmakers – wide receiver Danny Anthrop and running back DJ Knox – serve as the team’s primary kickoff returners. They are good players, but if Joey Slye continues to kick the ball out of the back of the end zone, those two guys shouldn’t be a factor on special teams.

Trae Hart (5-10, 168, So.) and starting cornerback Frankie Williams serve as Purdue’s punt returners. Hart is extremely inexperienced, whereas Williams averaged 15.9 yards per return last season. Hart is listed as the #1 returner on the depth chart, but we could see both.

Senior placekicker Paul Griggs is just 2-of-5 on the season, and he’s missed all three of his attempts from a distance of 30 yards or more. Don’t let his early numbers fool you, though. Last season he was 16-of-20 with a long of 53 yards. He was the first Purdue kicker in history to make three field goals from beyond 50 yards in one season. He is very capable, and can be a major weapon for the Boilermakers.

Before the season began, I thought the Hokies would win this game by a few touchdowns. Now I’ll be happy if they come away with a victory, no matter the final margin. Tech will be starting a 207 pound walk-on middle linebacker who is coming off a torn ACL against a team that is averaging 217 yards per game on the ground, and the Hokies have struggled with their outside containment in their first two contests.

At quarterback, Brenden Motley got better as the game went along against Furman. However, he was late on two corner routes in the first half, and those passes likely would have been intercepted by FBS competition. Starting slow and coming alive in the second half is perfectly fine against FCS competition, but it probably won’t cut it on the road against a Big Ten team. Motley can’t afford to be late with his passes this week, nor can he stare down his primary receiver all game as he did against Furman. Purdue is not great, but they are certainly better than the Paladins. They are capable of making Tech pay for their mistakes.

I really don’t know what to expect this week, and until we see Brenden Motley play a game or two against FBS competition, this season is going to be very difficult to predict.

Will Stewart’s Take: Chris’ rundown of Purdue doesn’t make me feel any better. They have a solid running game and an experienced defensive backfield. They have the right recipe for causing Tech’s offense and defense a lot of trouble.

Purdue also has a coaching staff and a program that probably views this as a launch point opportunity. 1-11 two years ago? Blech. 3-9 last year? Blech. 1-1 this year, with a chance to beat Virginia Tech and get momentum going for their first bowl game with the new staff? Hmmm, they probably have this one circled on their calendar as a chance to make a statement about where they’re headed.

While Virginia Tech is trying to figure out their quarterback and linebacker situations and keep things held together until Michael Brewer returns, Purdue has their eyes on bigger, program goals. The intangibles favor the Boilermakers, I believe.

The atmosphere shouldn’t be too fearsome. A look at the Purdue football ticket availability map (hope that link works for you, it was an awfully long, complex link) reveals a ton of available seats in 57,236-seat Ross–Ade Stadium.

To win this game, it is critical for the Hokies to avoid turnovers and to force at least a couple. Turnovers are always important, so I rarely talk about them, but I think it’s more important than most games to avoid coughing up the football. Give Brenden Motley throws he can make, and don’t put Dwayne Lawson, if he plays, in a position to make big mistakes.

We know that Motley can be accurate when he’s throwing against an FCS defense that gave the receivers plenty of room. How will he do against an FBS defense that will challenge him with tighter coverage and a little deception?

Defensively, the Hokies need to force third and long and pressure the quarterback, and force him into throwing interceptions. I think Purdue is going to have some success running the ball, so when the Hokies are able to stuff the run and force long-distance situations, they need to capitalize.

And special teams needs to provide an advantage. We already know Purdue won’t be returning any kickoffs (heh-heh, thank you, Joey Slye), so the Hokies need to gain a leg up here, pardon the pun. If Frank challenges Joey Slye to make a few long field goals — he’s got the leg for it — Slye needs to nail pretty much everyone that comes his way.

This one’s going to be very, very tight. I’ll continue to go with the Hokies this early in the season, and cross my fingers that they’ll respond well on the road, with this uptick in competition. But they are indeed facing some serious challenges at QB and linebacker.

Who will win the Virginia Tech-Purdue game?