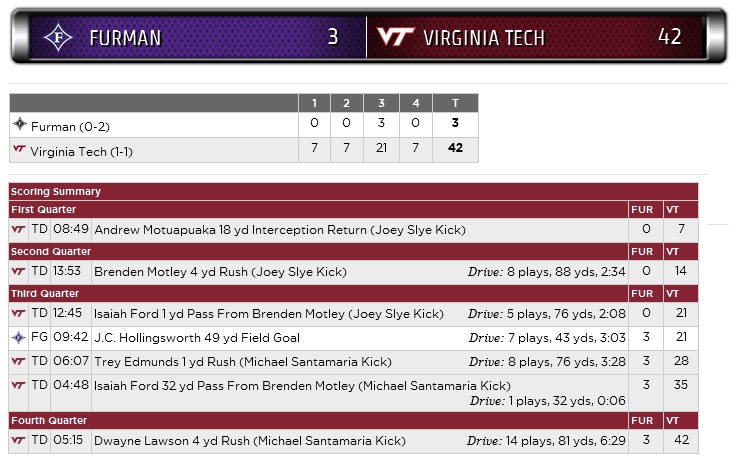 Virginia Tech got off to a sluggish start against Furman, then got into a rhythm and blew the Paladins out 42-3.

Andrew Motuapuaka returned an interception 18 yards for a touchdown halfway through the first quarter to stake Tech to a 7-0 lead, and the Hokies stretched it to 14-0 in the second quarter when Brenden Motley ran it in from four yards out.

Tech led 14-0 at the half, then got the offense rolling in the third quarter, scoring 21 points and taking a 35-3 lead.

“I thought he played exactly what I thought he’d do,” Tech head coach Frank Beamer said afterwards. “Really never flinched … I think his play gives us a lot of hope, really.”

Behind Motley, the Hokie offense took a while to get going, piecing together just one scoring drive in the first half, an 8-play, 88-yard affair that ended with his four-yard TD run.

Motley was just 2-of-5 in the first quarter, including a 46-yard pass to Bucky Hodges, but in the second quarter, he started to get comfortable, completing 5-of-9. Overall, Motley was 7-of-14 in the first half for 113 yards.

In the third quarter, though, Motley caught fire, completing 9-of-10 passes for 120 yards and two touchdowns, both to Isaiah Ford. Motley now has three career touchdown passes, all to Ford (one last week against Ohio State and two today). Motley looked more relaxed as the game went on, and his receivers started finding huge holes in the Furman secondary. The Hokies had 216 yards in the third quarter.

“Brenden Motley played really well in the second half,” offensive coordinator Scot Loeffler said. “We started slow again, just like Ohio State and ended up picking it up … we need to jump out and go. That’s going to be a big emphasis.”

In addition to his solid passing stats, Motley carried the ball four times for 38 yards and a TD.

Dwayne Lawson got almost all the QB snaps in the fourth quarter. He completed his first career pass, a 31-yarder to Cline, and went 3-of-7 for 51 yards. He showed good arm strength, but his accuracy was inconsistent, at one point throwing three straight passes into the turf, short of his receivers.

“Mentally, he was exceptional,” Loeffler said of Lawson. “Physically, he was sporadic. His footwork was poor at times. But we’ll look at that, and he’ll learn that everything matters. Every little thing matters.”

Lawson also ran the ball nine times for 51 yards, including a nice four-yard run around the left end for his first career TD that capped the Hokies scoring.

“Dwayne’s got a good future,” Beamer said. “He’s got to continue to work on his throws, and he will. I think the mechanics got him more than anything, but he’s a bright guy that’s athletic.”

Chris Durkin was the clear #3 quarterback, not entering the game until mid-fourth quarter and not attempting a pass. Durkin ran four times for 25 yards.

On the day, the Hokie offense had 583 yards. That included 284 passing yards and 299 rushing yards on 41 carries, with zero yards lost rushing. Tech’s leading tailback rusher was Travon McMillian, with 6 carries for 98 yards, including a 63-yard non-scoring play early in the third quarter that got the Hokies going.

“He’s a dude,” Loeffler said, then repeated it a few more times.

Cam Phillips (5 carries, 86 yards) and Isaiah Ford (5 carries, 77 yards, 2 TDs) led the Hokies in receiving. Bucky Hodges caught two passes for 48 yards after being shut out by Ohio State in week one.

Defensively, the Hokies gave up 254 yards, including 136 yards rushing on 41 carries. Furman had good success working the edges with the running game throughout the contest, but the Paladins struggled to pass it, going 9-of-26 for 118 yards and throwing two interceptions.

On Motuapuaka’s interception return, Furman QB Reese Hannon didn’t see Motuapuaka lurking in the middle and threw it straight to him at the Furman 18-yard line. Motuapuaka ran it in from there untouched.

Adonis Alexander added a third-quarter interception on a tipped pass, and Kendall Fuller had an interception that was negated by an interference call on Brandon Facyson.

Tech’s leading tackler by far was Chuck Clark with 13. Motuapuaka, one week after struggling against Ohio State, had four tackles, and had to leave the game early in the third quarter with a knee sprain. He is expected to be ready for the next game. Motuapuaka was replaced by Sean Huelskamp, who had two tackles.

The Hokies had seven tackles for loss, including three sacks, one each by Deon Clarke, Woody Baron, and Corey Marshall.

“I think we did a little better today,” defensive coordinator Bud Foster summed up, “but we still have to clean things up. We had too many mental errors today. We’ll get that cleaned up.”

The Hokies go on the road for the next two weeks, at Purdue September 19th (3:30, ESPNU) and at East Carolina September 26th (time and TV TBD).

“We have some young players, and they’ll have to learn how to travel and do the right things on the road” Foster said. “Purdue is going to be a challenge for us. They’re an improved team and we have to improve. East Carolina is going to be a tough ball game. I think we have two tough games in front of us here.”