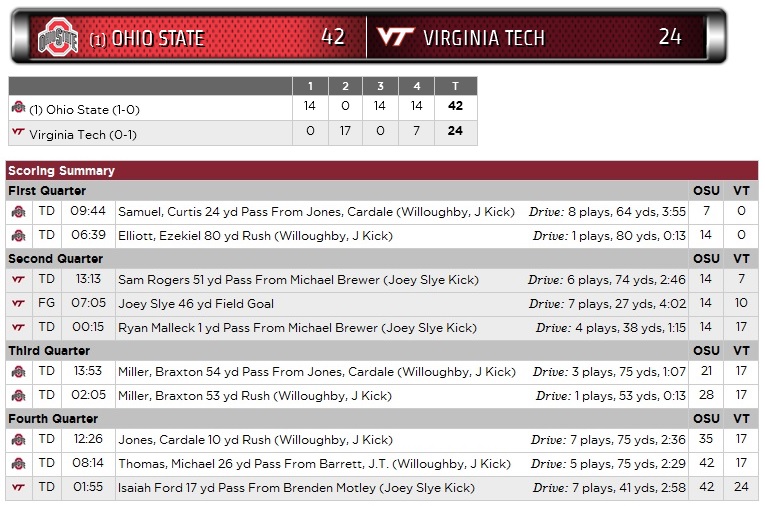 For 30 glorious minutes, Virginia Tech played toe to toe with #1 Ohio State, leading 17-14 at half time. Then the second half started.

Michael Brewer suffered a broken collarbone early in the second half, and that injury helped spark a second-half Ohio State explosion that turned a 3-point half time deficit into a 41-17 fourth-quarter lead. The Hokies scored a cosmetic touchdown late, but never really threatened the Buckeyes in the second half.

The early report on Brewer is that he has a broken collarbone and will be out 4-5 weeks. That would put Brewer’s return for the NC State game on Friday, October 9th at the earliest, or perhaps the October 17th game at Miami. Brewer will have surgery Tuesday, September 8th and could be out as long as eight weeks, per Virginia Tech’s post-game press conference information.

Brewer was replaced by Brenden Motley, who went 4-of-9 for 36 yards with one interception and one touchdown, a late pass to Isaiah Ford after the game was well in hand for Ohio State. True freshman quarterback Dwayne Lawson was dressed but didn’t see any action for the Hokies.

Ohio State started Cardale Jones at quarterback, but all three Ohio State QBs put up scores. Jones threw for two touchdowns and ran for another, Braxton Miller started at H-back and caught a TD and ran for a TD, and J.T. Barrett threw for a touchdown after being inserted at QB late in the game.

OSU tailback Ezekiel Elliott ran for 122 yards on just 11 carries, including an 80-yard touchdown run up the middle in the first quarter. In all, Ohio State scored three touchdowns on plays of 50-plus yards, on their way to 572 yards total offense.

“We ran into an extremely talented football team,” Tech defensive coordinator Bud Foster said. “They did a great job against us. We just gave up too many big plays, too many tackles. We weren’t as sharp as we needed to be.”

The Hokies were led in rushing by J.C. Coleman with 12 carries for 43 yards, and the Hokies ran for 128 yards on 44 carries. Subtracting out four Ohio State sacks for 22 yards, VT rushed for 150 yards on 40 carries.

Fullback Sam Rogers was a star for the Hokies, carrying 3 times for 23 yards, and catching 3 passes for 66 yards, including an electric 51-yard touchdown catch early in the second quarter that got the Hokies going and made it 14-7, Ohio State.

Ryan Malleck was VT’s top receiver with 4 catches for 48 yards, but fellow tight end Bucky Hodges was shut out. Isaiah Ford had 3 catches for 61 yards and a touchdown, and Cam Phillips had 2 catches for just 4 yards.

Defensively, the Hokies were led by defensive backs Chuck Clark and Desmond Frye with nine tackles each, and Frye registered Tech’s only interception. Other notable Hokie defenders: Luther Maddy with four tackles and 1.5 tackles for loss, Andrew Motuapuaka with four tackles, and Dadi Nicolas with two tackles. After sacking Ohio State seven times last year in Columbus, the Hokies registered just four tackles for loss in this game, including zero sacks.

The game almost got out of hand for the Hokies in the first quarter. Brewer was sacked twice in VT’s first two possessions, as the Hokies picked up just one first down and couldn’t advance beyond the Virginia Tech 31 yard line. Meanwhile, Ohio State drove 64 yards in 8 plays on their first possession and scored on a 24-yard catch by Curtis Samuel. The Buckeyes faced a 3rd and 21 on that possession, but picked up 16 yards and then converted the following 4th and 5 before scoring on the catch by Samuel.

On OSU’s next possession, Elliott roared right up the middle for an 80-yard TD run on the first play of the possession, making it 14-0 Buckeyes, with 6:39 to go first quarter.

Tech responded by driving from their 35 yard line to the Ohio State 32, and Joey Slye, who made two field goals of 55+ in fall scrimmages, missed a 50-yard field goal from there. Ohio State took over and drove down the field again, appearing to set the table for a blowout when Cardale Jones rushed for a 16-yard TD to put Ohio State up by three touchdowns. But the Buckeyes were flagged for two holding penalties on the play, negating the touchdown, and Buckeye kicker Jack Willoughby missed a 43-yard field goal to give the Hokies a reprieve.

The Hokie offense finally came to life, going 74 yards in 6 plays. On first down from the Hokie 49, Brewer rolled right and threw it back left to an uncovered Sam Rogers, who bolted down the sideline, juked an Ohio State defender at the ten-yard line, and scored to make it 14-7 and fire up Lane Stadium.

That also fired up the Hokie defense, and they registered an interception when Jones rolled left and tried to get the ball over the outstretched hands of Deon Clarke, who tipped it. Desmond Frye came up from the defensive backfield and made a diving interception that held up after replay review.

With 1:30 to go in the half, the Hokies got a huge break when Ezekiel Elliott muffed a punt and Tech’s Anthony Shegog recovered at the OSU 38-yard line. Brewer threw to the end zone but left it short on the next play, but Isaiah Ford came back to catch it at the Ohio State two yard line. Two plays later, on 3rd and goal from the one, Brewer executed another throwback play, this one to a wide-open Ryan Malleck with just 15 seconds left, and Tech took a 17-14 lead into half time.

Lane Stadium was rocking and rolling … but then the second half started.

Ohio State made short work of the Hokies in the second half, scoring 28 straight points, 14 in each quarter. After the Buckeyes “drove” 75 yards in 3 plays and scored on a 54-yard pass play to Braxton Miller, Tech’s Michael Brewer got crushed on a 3rd and 4 play by Ohio State defensive tackle Adolphus Washington. At 6-4, 290, Washington outweighs Brewer (6-1, 198) by almost 100 pounds, and when he hit Brewer and knocked him to the turf right after Brewer released the ball, Brewer landed on his left shoulder, breaking his left collarbone in the process.

With Brewer out and Ohio State leading 21-17, the rest was, in retrospect, a foregone conclusion. The Buckeyes rolled up 305 second-half yards in just 29 plays, highlighted by a Braxton Miller video-game spin move during a 53-yard touchdown run. Miller took the direct shotgun snap, ran left, and created a trail of abandoned jock straps with a spin move that will be featured on ESPN for the rest of the season, any time the Disney network needs an OSU highlight.

“I thought he was really special,” Frank Beamer said of Miller. “I really would have preferred [he] be over there competing for a quarterback job, rather than out there as [an H-back].”

The only second half highlight for the Hokies was a late touchdown pass of 17 yards from Brenden Motley to Isaiah Ford with 1:55 left. Motley escaped pressure and rolled right, then threw back to the middle of the field to Ford, who had gotten lost in the end zone.

The Hokies won’t have much time to mourn the loss, or Brewer’s injury, as they return to action against Furman on Saturday at 3:30 on ESPN3.