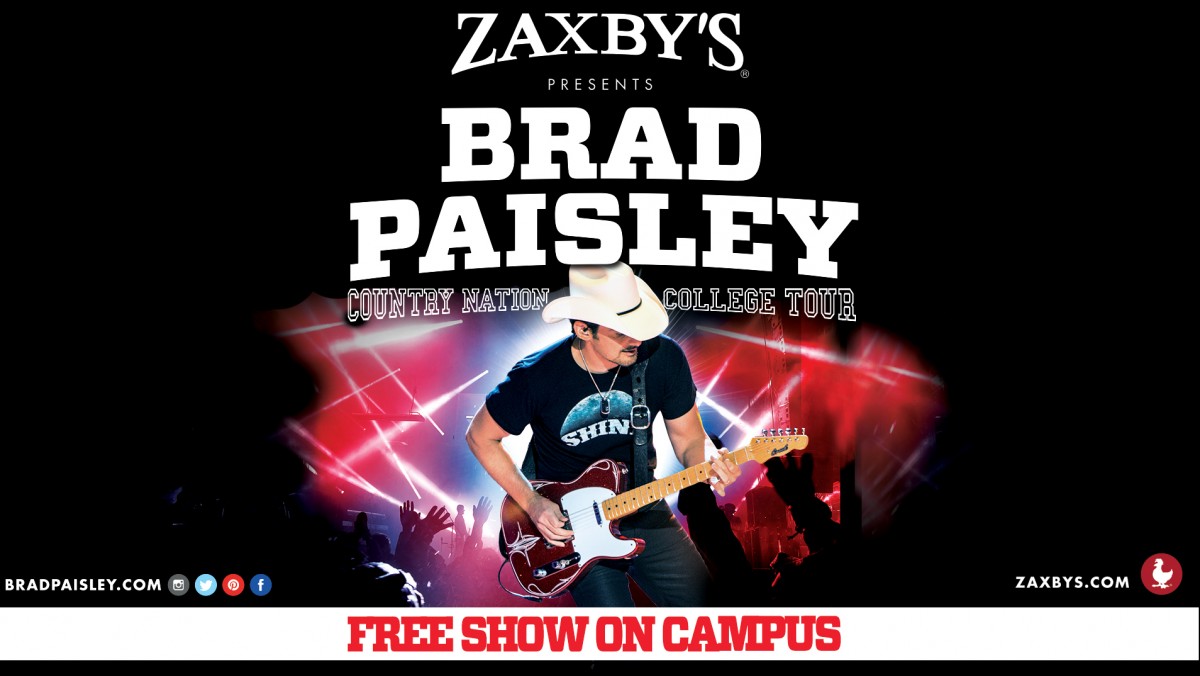 NASHVILLE, Tennessee (August 19, 2015) As the 2015 college football season kicks off, country music superstar Brad Paisley and IMG will be taking his show to select universities to provide free entertainment for the campus community. The tour kicks off September 6 at Virginia Tech.

The “Country Nation College Tour presented by Zaxby’s” will roll into Blacksburg, Virginia on September 6 and set up on the Virginia Tech campus. Breakout country artist Eric Paslay will be the special guest.

The concert will be held in the Cassell Coliseum Lot (Lot 1) with the opening act taking the stage at 8 p.m., followed by Paisley at 9 p.m. Parking will be available south of Lane Stadium, including Lots 2, 3 and 5, as well as ADA parking in Lot 4. Beamer Way and Washington Street will be closed starting at 5 p.m.

“Hokie Nation supports us with tremendous passion and dedication,” said Tech Director of Athletics, Whit Babcock. “The opportunity to bring a Grammy award-winning artist like Brad Paisley to the Virginia Tech campus is great way to thank our great fans and kick off an amazing weekend. We appreciate IMG helping make this memorable event possible.”

Paisley is currently poised to hit the radio airwaves with “Country Nation,” the newest single from his chart-topping album, Moonshine in the Trunk. Shipping to country radio on August 31 with an official airplay impact date of September 14, “Country Nation” was written by Paisley and his longtime collaborators Chris DuBois and Kelley Lovelace. A celebration of the blue-collar spirit and America’s passion for sports, the song weaves-in a shout-out to 18 college sports mascots.

Paisley’s affection for college football runs deep. He plans to once again serve as a spokesperson for “College Colors Day,” a nationwide celebration of the new college football season, which was created by IMG. He has also appeared as a celebrity guest picker on the ESPN show “College GameDay” at West Virginia University.

IMG College, the multimedia rights and trademark licensing partner of Virginia Tech, is a division of WME | IMG, which also represents Paisley and brokered the college tour deal.

“Music and sports are passions of so many people—Zaxby’s included—and we couldn’t think of a better way to unite the two this fall,” said Zaxby’s CEO and co-founder Zach McLeroy. “We’re even more passionate about the guests and communities we serve, and this sponsorship is a perfect opportunity for us to give back to our fans.”

In addition to the free concert series, McLeroy explained Zaxby’s connection to college sports. “We’ve been involved with college sports for a long time—Zaxby’s was, after all, started in a college town,” he said. “But we’re amping it up this football and basketball season by partnering with 30 Division I colleges throughout our footprint. We’re excited to play a role in something that means so much to so many.”

About Brad Paisley
Brad Paisley is a critically acclaimed singer, songwriter, guitarist and entertainer whose talents have earned him numerous awards, including three GRAMMYs, two American Music Awards, 14 Academy of Country Music Awards and 14 Country Music Association Awards (including Entertainer of the Year), among many others. He has been a proud member of the Grand Ole Opry since 2001. Paisley has written 20 of his 23 #1 singles with the first being his 1999 hit “He Didn’t Have To Be” and his most recent, “Perfect Storm,” from his chart-topping 2014 album Moonshine in the Trunk. Paisley kicked off his Crushin’ It World Tour the middle of May by playing to over 50,000 fans the first weekend. Paisley has partnered with Boot Barn® and developed an exclusive line of jeans, hats, T-shirts, jewelry, belts and woven shirts called Moonshine Spirit by Brad Paisley. Fans can look for him and Carrie Underwood to return as hosts of “Country Music’s Biggest Night™” for the eighth consecutive year when “The 49th Annual CMA Awards” airs live from Nashville on Wednesday, Nov. 4 (8:00-11:00 PM/ET) on the ABC Television Network. Connect with Brad at www.BradPaisley.com, www.Facebook.com/BradPaisley, on Twitter @BradPaisley, on Instagram @Brad Paisley, and YouTube at YouTube.com/BradPaisley.

About Zaxby’s
Enjoying the best chicken around in an atmosphere where you could be yourself – that’s what childhood friends Zach McLeroy and Tony Townley wanted to achieve when they founded Zaxby’s in 1990. Many years and locations later, Zaxby’s is still delivering on that promise: to serve delicious chicken fingers, wings, sandwiches and salads in a fun, offbeat atmosphere where all customers are welcomed as friends.

In 2015, Zaxby’s was the No. 9 fastest-growing chain in the Nation’s Restaurant News Top 100 list. Entrepreneur magazine ranked Zaxby’s as one of the fastest-growing franchises and as a Top 500 franchise. In Technomic’s Consumers’ Choice Awards, Zaxby’s was named the Most Craveable fast casual restaurant chain (2014), and as the chain with the Most Unique Items You Can’t Get Elsewhere (2015). Zaxby’s operates more than 700 locations in 16 states and is headquartered in Athens, Georgia. For more information, visit zaxbys.com or zaxbysfranchising.com.