He’s much thinner, he looks older, and his voice sounds different, but when he stepped to the podium to kick off 2015 Football Media Day at Virginia Tech, Frank Beamer was on his game.

Much of the talk that swirls around Frank Beamer these days relates to how much longer he’ll keep coaching. We certainly haven’t shied away from the topic here at TSL, primarily because, when it happens, it will be one of the biggest pivot points in the history of Virginia Tech athletics, on par with Frank’s hiring, the Big East Football Conference invitation, and the transition to the ACC.

Most of the questions Frank was asked in his 12 minutes behind the podium concerned everything but his retirement. And like a typical football coach, Frank was consumed not with the big picture, but the details of the day.

The first thing out of his mouth, after a hello: “Practice is going well.”

The second thing: “Today is important.”

He wasn’t talking in the grander sense. He wasn’t waxing philosophical about living in the moment, nor was he riffing on a variation of one of his central mantras, which is “Take care of the little things, and the big things will take care of themselves.”

Yes, with a couple dozen media members hanging on his every word, ready to ask him about depth charts, the opener against Ohio State, preseason expectations, ESPN GameDay, and everything else under the sun, Frank told us how many times they’re going to punt in a scrimmage that will be vanilla and will focus on, in his words, “trying to get a good evaluation of players and who we move forward with.”

It’s the same thing they do every fall with the opening scrimmage. Frank Beamer is locked into the day-to-day, focusing on his job, and probably damn glad to be concentrating on the details, almost eight months after he watched his team win the Military Bowl from the press box following throat surgery.

About that … Beamer sounded good on Saturday. His voice sounds different and probably always will, at least for a while. But it was also strong, not hesitant, and sure.

In recent years — at least, in the three years we’ve been covering Tech football as credentialed media, since the 2012 season — Frank has brought a depth chart to media opportunities, and he has glanced at it and rattled off names, making sure that (1) he gets them right; and (2) everyone gets a little love.

Saturday, there was no depth chart, no looking down. He didn’t exactly run down the roster, but he doesn’t need to. Head coaches just need to hit the high notes, and Beamer did.

He was spot on in talking about the Ohio State game, acknowledging its importance while correctly noting that in the grand scheme of things, it’s just one game in a 12 game regular season schedule.

“When you start out with a team like Ohio State,” he said, “I’ve always said, your preparation is more intense. And then after the game you know more about your football team, because they bring it out of you. If you’ve got a weakness where they’re very solid in every area on their team, it comes out a little bit. To me, it’s how many times do we start out on national TV, Monday night, Blacksburg, against the number one — and number one by far — team in the country. So it’s a good opportunity.”

But he also knows that about four months of football will follow that game, and it’s what the Hokies do after the OSU game that matters just as much, probably more.

“You just have to go back to last year. They went from a loss to a national championship, and we went from a win to some guys getting hurt — a lot of guys getting hurt — to where we had a hard time winning a football game. I was proud at the end to end up with a winning season and going to a bowl game and winning that. So that’s why I say, it’s the first ball game, and it’s big, but let’s go and play it the best we can, and then take care of [what happens] after that.”

He was asked about his offensive line, and he opined that ideally, bringing in five reserves at once to rest the starters is the optimal situation. He knows that almost never happens, though, and I personally can’t remember it happening at Virginia Tech since the 2000 season, when VT went ten deep and routinely repped their backups, to the point where I actually kept track of it in a spreadsheet.

Then Frank went back into “right now” mode:

Defensive line is a different story.

“I think the good thing about our defensive line is that we’ve got about eight of them, and maybe you could even throw a ninth or tenth guy in there. We stay fresh, and being fresh as a pass rusher … you get down there late third quarter, fourth quarter, it takes its toll. So that’s what I feel good about.”

In particular, Frank Beamer likes himself some Tim Settle. “Tim Settle, I don’t know what he weighs, about 340 or whatever, but I said, it’ll probably be amazing if we can ever get [him] down under 300, because he’s got the lightest feet of any 340-pound guy you’ve ever seen in your life. He’s easy.”

“Easy” is an odd word to use, but when he said it, Frank moved his hips and feet a little, and you knew what he meant: Settle might go three-and-a-half bills when he stands on a scale, but he moves easily at that weight.

Eventually, though, the question about his retirement came up, and it was the last question Frank fielded. It was asked by Paul Woody of the Richmond Times-Dispatch, and here’s exactly how Paul asked it:

Frank, you recently said that when the time comes, and you step aside, you’d like to see Shane or Bud take over. When that time comes, do you think you’ll be a part of that process?

Paul was referring to an article that ran on ESPN.com on July 28, an article with a very unfortunate headline: 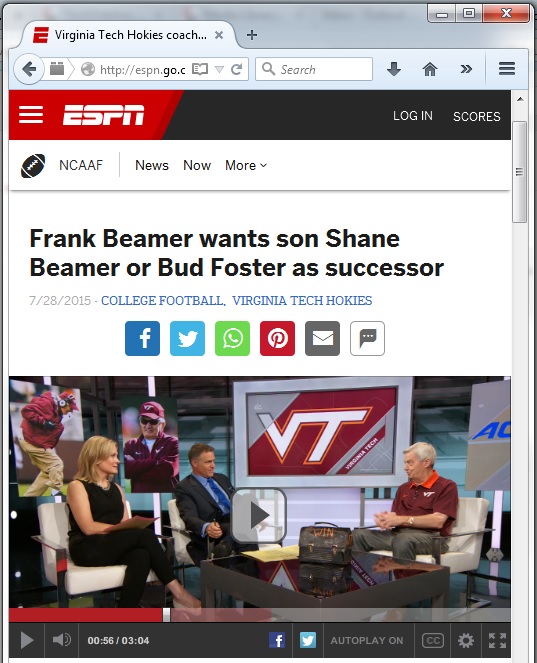 Click the picture to read the article, if you haven’t already. To put it bluntly, the headline is a misrepresentation of what Frank said. The headline makes it sound as if Frank made a definitive statement about wanting Shane or Bud to be his successor, but that wasn’t the case.

Given the chance, Frank made it clear that at the time, he was simply answering the question that was asked.

“Let me clarify that,” he said. “I think somebody said Shane and Bud would be the most logical, and then I talked about them. But on my staff, I think I’ve got a lot of guys that are capable of being head coaches. Several of them.”

As for whether or not he’ll have a hand in that, Frank was clear.

“I’m not going to have any part in determining that. That’s for the administration here at Virginia Tech.”

Then, with a smile, he added, “I’m just trying like heck to not make them make a decision any time soon.”

This upcoming season will be the third season since Frank upended his coaching staff after the 2012 season. Three years later, he’s comfortable with the decisions he made.