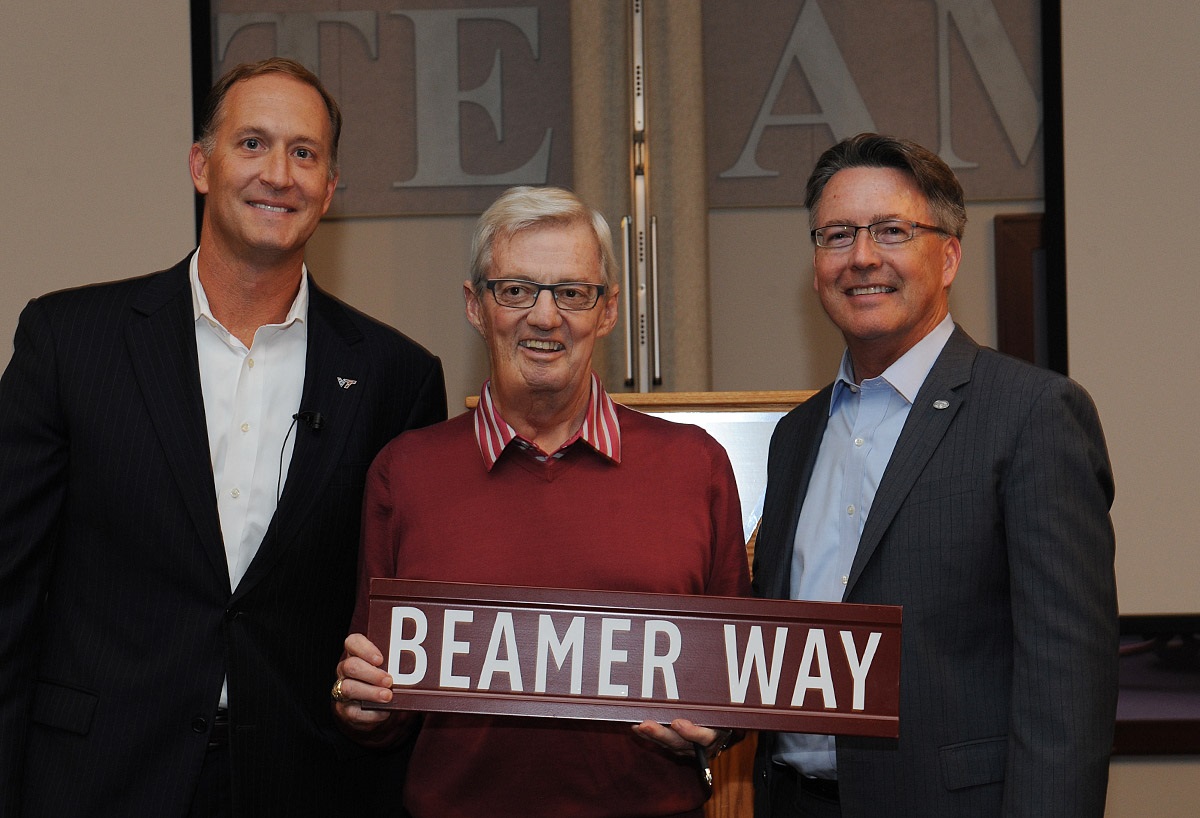 BLACKSBURG – In appreciation for his many years of service and extraordinary contributions to university life, the Virginia Tech Board of Visitors has renamed Spring Road in honor of Frank Beamer.  Recognizing contributions made both on and off the field by head football coach Beamer and his wife, Cheryl, Spring Road, which runs alongside the west stands and press box of Lane Stadium, will be re-named Beamer Way.  The official athletics department street address will be 25 Beamer Way in recognition of Frank Beamer’s jersey number when he played football for Tech from 1966-68.

“Frank Beamer is the winningest football coach in Virginia Tech history and Cheryl has been by his side supporting him and their family the entire way.  He has served as a figure of strength, excellence and compassion on campus and we wanted to honor Frank and Cheryl this way by renaming Spring Road to Beamer Way,” President Timothy Sands said.

“Coach Beamer personifies our department’s core values of integrity, service, honor, and excellence, and Hokies being ‘one team, strong together’.  This is our way of saying thank you,” Director of Athletics Whit Babcock said.  “We felt that, as we start his 29th season and as we look forward to the most anticipated game in Lane Stadium on Sept. 7, this was an appropriate time to honor the winningest football coach in Tech history and the active Division I wins leader.

“This recognition for Coach and his family has been in the works for a number of months. It is the right thing to do. It’s about respect and saying thank you, and we wanted it to be a surprise. We felt like having ‘Beamer Way’ adjacent to Lane Stadium was certainly appropriate, as was having our athletics department address serve as a legacy reminder of the principles and values that are important to Virginia Tech for generations to come.”

Frank and Cheryl Beamer were presented with this honor at the Hokies’ first team meeting of the 2015 football campaign, which was held Thursday afternoon.

“I am tremendously honored and humbled,” Frank Beamer said. “When I was informed of this, I had two immediate thoughts.  First, the appreciation I have for all of the players, coaches, support staff and fans that laid the foundation for this program. And secondly, I hope the ‘Beamer Way’ is the right way!  When people see that sign, I hope they can be proud of what it represents.  To any and all who had a part in this humbling recognition, I sincerely thank you.”

Beamer has taken Virginia Tech football teams to bowl games 22 consecutive seasons, giving the Hokies the second-longest active streak in the country, while joining Bobby Bowden, Tom Osborne and Paul “Bear” Bryant as the only coaches ever to accomplish that feat.

Other notable accomplishments include:

The Beamer Way road signs will be installed prior to the Hokies’ Sept. 7 home opener against the Ohio State Buckeyes.