Last season, Michael Brewer’s productivity ran hot and cold. He was great at times, such as in the Ohio State game, and he was bad at other times, such as against East Carolina (completely cold in the first half) and Georgia Tech (two fourth-quarter interceptions, one of which was returned for a TD).

Brewer was thrust into a tough situation. He arrived in Blacksburg in the summer and was named Virginia Tech’s starting QB just a few weeks later. He was expected to lead an offense laden with freshman skill players and a so-so offensive line (on its good days), while only knowing part of the playbook.

And then he started getting pounded over and over, as linebackers and D-linemen got plenty of free shots on him. Brewer was listed at 6-0, 200, but that’s being generous, and he was often blasted by guys like ECU’s Zeek Bigger, who was listed at 6-2, 228 and was on a dead run, unblocked, when he drilled Brewer early in that dismal loss.

It actually started earlier in the season, when Brewer scrambled up the middle against Ohio State and was hit simultaneously by three or four defenders, bending him at a not-so-funny angle and leaving him writhing on the turf.

As Ohio State players celebrated the knockout, Brewer dragged himself up off the turf and stayed in the game. We were told after the game via email that Brewer was beat up so badly that he couldn’t even bend over to carry his bag to the bus after the game — he needed help from then-equipment manager Lester Karlin.

Then Brewer got blasted early in the game against ECU, as things like this happened way too often: 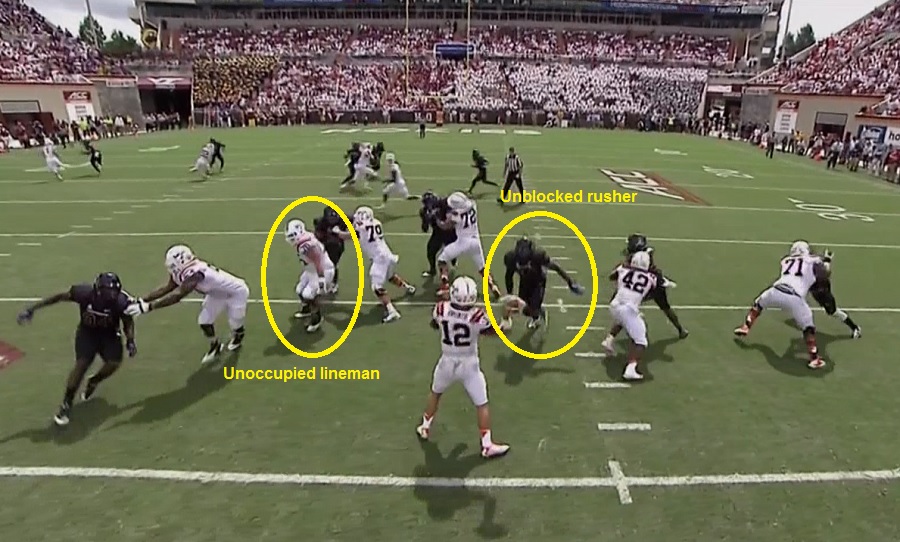 In that ECU game, TSL poster VTChip observed the following:

Brewer struggled to play consistently for most of the season, and the gifted passer we saw early on against Ohio State came and went at random, leading many of us to suspect that he was hurt. The coaching staff denied it mid-season, of course, but we’re told by more than one person that offensive coordinator Scot Loeffler is excited about Brewer’s potential in 2015 for two reasons: (1) he knows the full playbook now; and (2) he’s healthy … which implies that he wasn’t last year.

So we tabbed Michael Brewer as one of Our Favorite Players for 2015 for a lot of reasons, but mainly because he is one tough son of a gun. He’s no Jim Druckenmiller or Logan Thomas, size-wise. I was over at Tech last Friday morning, and Brewer came out of the Jamerson Center with Charley Meyer and walked right by me, and I was struck again that he’s not that much taller than I am … and I’m 5-9 on a good day.

Brewer took hits that would have killed me last year, and he kept going, even as the interceptions and losses mounted, along with fan criticism, and it would have been easy to become frustrated. I’m sure he was, but he kept quiet and kept playing, even-keeled.

We also like him for another reason: He was spotted at 7-11 recently in his F-150 with Wyatt Teller in the passenger seat and a kayak in the back. Gotta love a QB from Texas who drives a pickup truck and goes kayaking with the baddest offensive lineman on the team.

Oh, and here’s another: we love this pic of Brewer talking smack to UVa’s Quin Blanding after tossing a touchdown pass to Cam Phillips in last year’s Commonwealth Cup win — woof, woof!

Hopefully, Brewer will stay healthy this season and get to have the kind of gunslinging year that leads to lots of yards and lots of wins.

That wraps up our ten Our Favorite Players features for 2015. We plan on doing the list every year, and while some guys from this year’s list will carry over, there’ll be lots of new entries next year. For the full list of all ten players … click here.