Don’t look now, but a two-star recruit with just one Power 5 scholarship offer to his credit coming out of high school will probably get drafted next spring.

The day before National Signing Day in 2011, that’s who Luther Maddy had to pick from. Then Virginia Tech offered on Tuesday, February 1st, and Luther committed instantly. The next day, he signed with VT, and he has never looked back, starting seven games his true freshman season in 2011, and in his career, he has amassed 22.5 tackles for loss (TFL) and 11.5 sacks (a very healthy number for a DT) in a little over three seasons (2011-2013 and four games during an injury-shortened 2014).

Being called the “bell cow” is the high honor for a Virginia Tech defensive tackle under Charley Wiles, and Wiles has bestowed that honor on Maddy. Maddy is the perfect fit for Virginia Tech’s defense. He’s compact (6-1, 293) and explosive, unusually quick and athletic for a man his size. He would fit in well with a lot of defenses, but he fits in great in Bud Foster’s defense, which eschews sheer size in favor of the physical gifts Luther Maddy has.

There are plenty of examples of Luther’s athleticism on YouTube, but here’s a play that perfectly showcases his ability to penetrate, accelerate and change direction (twice), while still maintaining the strength to make a one-armed tackle. It’s an exceptional play, the type that has pro scouts very interested in Maddy.

But he’s not one of Our Favorite Players just because he’s good on the field. Look under the hood, and you see a great guy off the field as well.

First of all, Maddy has the respect of his coaches, teammates, and the press. In looking at his hokiesports.com bio, it jumped out at me that Luther has won a team award in every spring practice he has participated in.

Luther didn’t win an award in Spring 2015, because he was rehabbing from a knee injury suffered against ECU in 2014 (an injury he knew about and played with against Georgia Tech the following week, anyway).

Maddy was named honorable mention All-ACC selection by the ACSMA (media) and the coaches for the 2014 season … a pretty mean feat, since he only played four games last year.

Where Luther really earns his stripes off the field is how he carries himself. On Twitter, he conducts himself with class and restraint, never cursing and tweeting positive messages of affirmation and interacting good-naturedly with fans.

That doesn’t mean that Big Lu doesn’t have swagger. Last July, he predicted the win over Ohio State, as reported in the media and then passed on by ESPN: 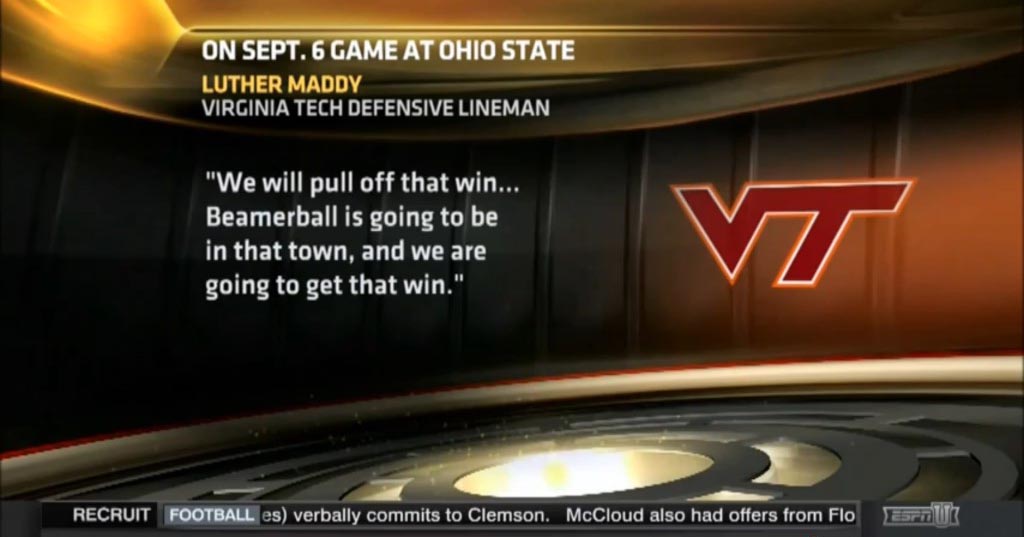 We love our leaders to have that just-right mixture of humility and confidence, and Luther’s got it.

Luther’s also got a huge heart, as evidenced by this amazing story told by VTSmitty in this post from the VTScoop.com message boards. 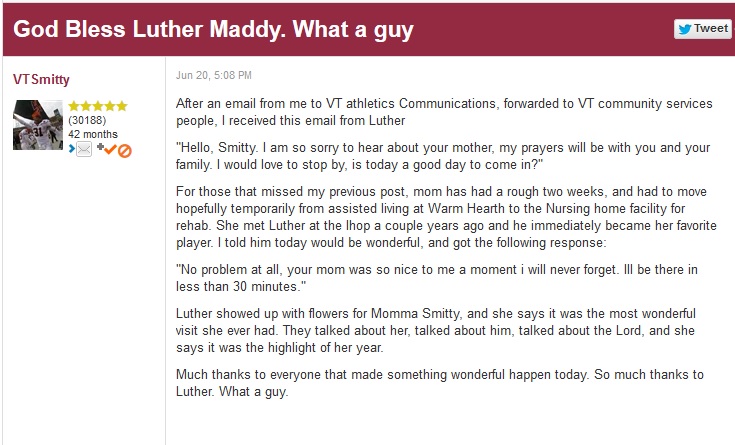 Looking back, it’s hard to believe that Luther Maddy only had one scholarship offer from a major-conference program. It’s hard to imagine where Virginia Tech’s 2015 defense would be without Luther and high school teammate Dadi Nicolas, but fortunately, we don’t have to know. We can just enjoy them as two of Our Favorite Players for 2015.