If you’re wondering why I dropped Carlton Weatherford’s name, try this interesting stat, dug up by Chris Coleman for his recent TSL Pass series on fullback production in the ACC and Big East eras:

[Sam] Rogers’ touchdown against Ohio State was the first touchdown by a Virginia Tech fullback since Carlton Weatherford powered one in against Miami way back in 2007.

That’s how good Sam Rogers is: he has brought the fullback position, which had gone missing from the Virginia Tech offense since the Hokies entered the ACC, back to Blacksburg. In just two seasons (2013 and 2014), Rogers has more touches and more yards than every other VT fullback combined from 2004-2012 (nine seasons).

That’s so impressive that OXVT memorialized it in an infographic.

(By the way, ignore the part of the infographic where Sam tells the belly-flopped Hoo that it’s 3,792 days. As of July 7, 2015, that count was up to 3,874 days. Honestly, that counter spins so fast, even the Internet has trouble keeping up with it. Follow The March to 4,000, as we call it here on TSL, via @CommonwlthCup on Twitter.)

Sam Rogers isn’t the guy you send off the bus first, however. He’s not the player opposing fans will point at during pre-game warmups and wonder, “Who’s that guy? He looks really good.”

Rogers’ relatively small size belies remarkable athleticism. In high school, he was an accomplished football player at Hanover High in Mechanicsville, VA, where he lettered all four years and was a two-time first-team All-Metro selection by The Richmond Times-Dispatch. This cut-and-paste from his hokiesports.com profile tells you all you need to know, especially the last line:

Played quarterback, receiver, running back, and multiple positions on defense … Rushed for 1,178 yards and 18 touchdowns and threw for 1,006 yards and six touchdowns as a senior … Also caught five passes for 90 yards … Earned first-team all-state as a utility player as a senior.

Cue the video of the catch against Ohio State.

But the reasons why we like Sam Rogers go beyond production and athleticism, and beyond his from-walk-on-to-key-player story.

We also like Sam because (1) he goes the extra mile, like when he shoved Michael Brewer into the end zone against BC last year on 4th and goal from the 1 … 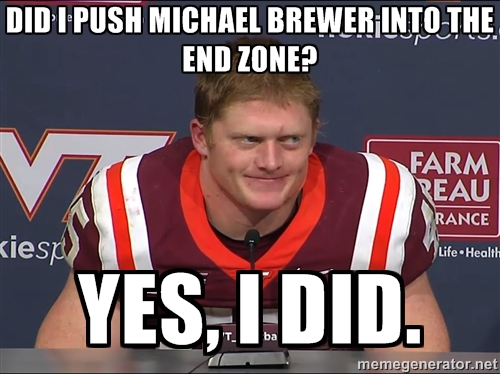 … and (2) he’s the kind of guy who fractures his elbow, doesn’t realize it, and keeps playing, like he did against Cincinnati in the Military Bowl. He’s tough.

Sam’s got an edge to him, just like the other two guys we have profiled so far in this series, Dadi Nicolas and Wyatt Teller. Fill a team up with guys like that, and you’re going to win a lot of football games.

Rogers will enter 2015 as a true junior, so he’s got two more years at Virginia Tech. He’s not even a senior, and he has made our list of Our Favorite Players for 2015.